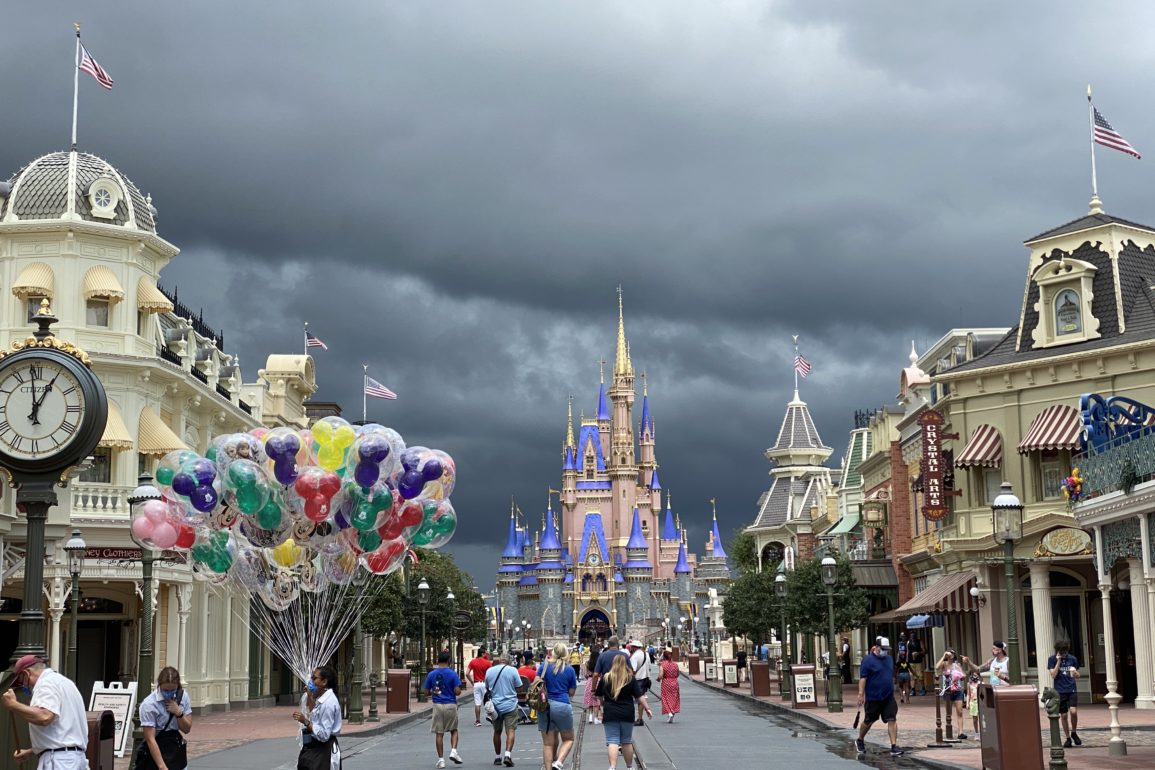 Hello from a stormy Magic Kingdom! It started out as a bright and sunny day, but ended on quite a dramatic note in only the way a Florida day can. We had plenty of fun before things got too damp, so let’s get started!

Our traditionally preferred method of transportation into the parks is the Monorail, but today both the Express and the Resort line were having a delayed opening. It proved to be a nice change of pace to take the Ferry Boat in to the Magic Kingdom, even though the view was not quite as interesting.

Once inside the park we found this cute newcomer to the Halloween merchandise line right away. This Minnie Mouse pumpkin bucket features a candy corn bow and has the words “Sweet fun for Everyone!” printed on the back.

Inside, she’s filled with gummy candies made to look like traditional candy corn. This is a perfect treat for those who like the look of candy corn but may not like the taste. You can find this mini-Minnie Mouse pumpkin candy bucket at the Emporium on Main Street, USA, and it retails for $7.99.

We found two colorful phone cases on our way around the park. Both feature rainbow park icons, and match this year’s Pride merchandise line. Available for the iPhone 6S, X, XR, XS Max, these cases can be found at Frontier Trading Co and the Emporium and retail for $34.99 each.

At Grizzly Hall, home to the Country Bear Jamboree, some of the netting covering the peak of the roof has been removed. Rumored to be a bat deterrent, the majority of the netting remains in place.

The exterior queues for “it’s a small world” and Peter Pan’s Flight were both given rope barriers today to keep passers-by and those in line separate.

The queue for Peter Pan’s Flight was also extended significantly today, with masking tape marking a rough border between the line and the open walkway.

While the queue previously stopped at the corner of the attraction building, it now goes down the hill and under the covered walkway, looping back on itself just before reaching the doors of Columbia Harbor House.

Face masks have returned to Fantasy Faire, and unlike the other mask locations in Magic Kingdom, you can pick out your own from the stand here.

A self service face mask kiosk also appeared at Plaza del Sol Caribe Bazaar, the exit shop for Pirates of the Caribbean. Unlike other locations around the park, this location had three styles of size XL masks, “The Child”, Mickey Mouse, and Tie Dye.

Speaking of “The Child,” we found the missing piece to the puzzle that is “The Bounty Collection” at Tomorrowland Light & Power Co. We had previously been unable to find #2, but today he was there waiting for us.

We were able to get a picture of almost the complete set. Each figurine retails for $9.99.

While in Tomorrowland, we spotted this colorful Black Panther phone case in the maDe kiosk, along with a few others. We couldn’t help but stop and take a closer look.

Over at the Fantasyland Station, planters have been brought in to screen the train tracks from view.

While no work is currently being done there yet, refurbishment has been done to other parts of the line during its closure due to the nearby construction on TRON Lightcycle Run.

Be sure to follow us for future updates on this developing site!

We found a fantastic series of stickers featuring Villains and their catch phrases. We are loving this new artwork! Ursula was our favorite, but honestly we don’t want to choose just one.

With rain headed our way, the Rainy Day Cavalcade made an appearance down Main Street, USA. We love the bright colors and bright smiles of this parade on grey, rainy days!

With these impressive storm clouds looming, we were able to make it safely home before the storm hit. We had a wonderful day at the Magic Kingdom, and we hope you enjoyed coming along with us. Have a magical day!