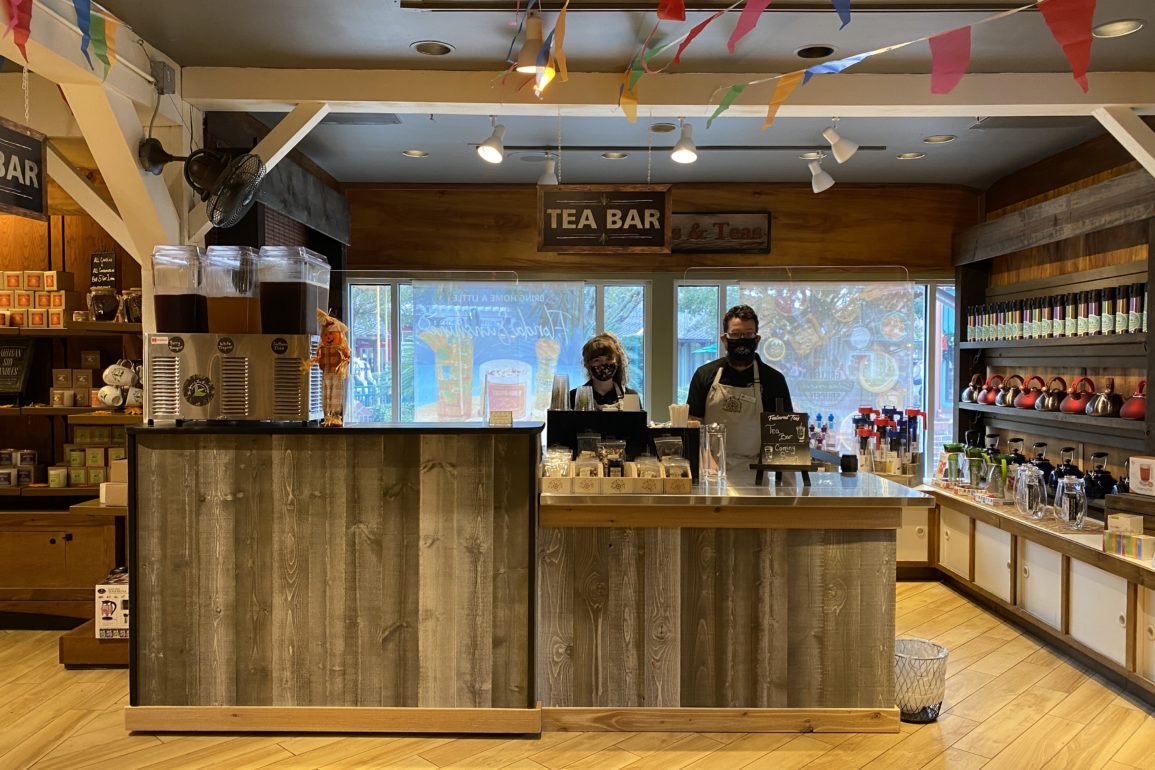 Hello from a rare relaxing day at Disney Springs! We had an exciting early morning checking out the Annual Passholder shopping event for the Haunted Mansion Minnie Mouse: The Main Attraction merchandise at the Magic Kingdom. After spending some time admiring the collection in the proper setting (and making a super fun Insta reel!), we set out for Disney Springs to see what new things we could find there. Let’s get started!

When we go to the parks, you know we like to start with construction updates, and the Springs is no exception. While not strictly construction, we found this major change to the vendor lineup. Lucky Brand has closed its doors permanently.

Construction at on the future location of Everglazed is going well, with new scaffolding now covering the entire front of the building. Concept art was recently released, giving a sneak peek of what the building will look like when it’s finished.

Around the corner at the future location of M&M, construction has moved quickly recently, with metal framing added as well as plywood.

This new addition has been added inside The Spice & Tea Exchange is almost ready to open. A Tea Bar has been added which will serve hot and cold teas to guests.

While the teas are not currently available for purchase, the cold teas are available to sample. We tried the “White Tropical”, an un sweetened white tea, which we thought was fruity and delicious.

In addition to many original loose leaf tea blends available for sale, they also had everything needed to make tea, including tea pots, kettles, and these adorable tea steepers. The manatee was our favorite!

They will also have a Spice Blending Counter soon, where you can have custom spice blends made.

We stopped in at the LEGO Store to see what was new, and found this. Do you feel like something might be missing? That’s because the LEGO statue of “The Child” from The Mandalorian is making a special appearance every Monday for “Mandalorian Mondays”. It’s just one more reason to look forward to Season Two of The Mandalorian!

While we were there, we noticed that the Minifigure Factory was up and running for the first time since the store reopened.

The Factory is open by appointment only at this time.

We found some new merchandise today at the World of Disney, starting with this woman’s cropped oversized ringer t-shirt featuring the “Original Grape Soda” branding from the movie Up. This shirt retails for $36.99.

We also found this fun new mug featuring all the cats from the movie The Aristocats playing music and having a party. After all, everybody wants to be a cat!

It was quite the day for pin collectors as the “What’s New” section at Pin Traders was full to bursting with new pin sets. We found this “I’m Such A…” Princess Open Edition pin set for $24.99.

We found this “80’s Hair” Open Edition pin set featuring Scuttle, a “dinglehopper”, and a can of hairspray for $24.99.

Up next was this amazing “Disney Dance Party” Open Edition pin set featuring Sebastian, Timon, Iago, and Lumiere for $24.99.

Eagle eyed shoppers might recognize this theme from a set of shirts released earlier this year. This “I’m Here For The…” Open Edition pin set also retails for $24.99.

After all that pin excitement, we were ready to head home. We had a great day at Disney Springs, and we hope you enjoyed coming along with us. Have a magical day!