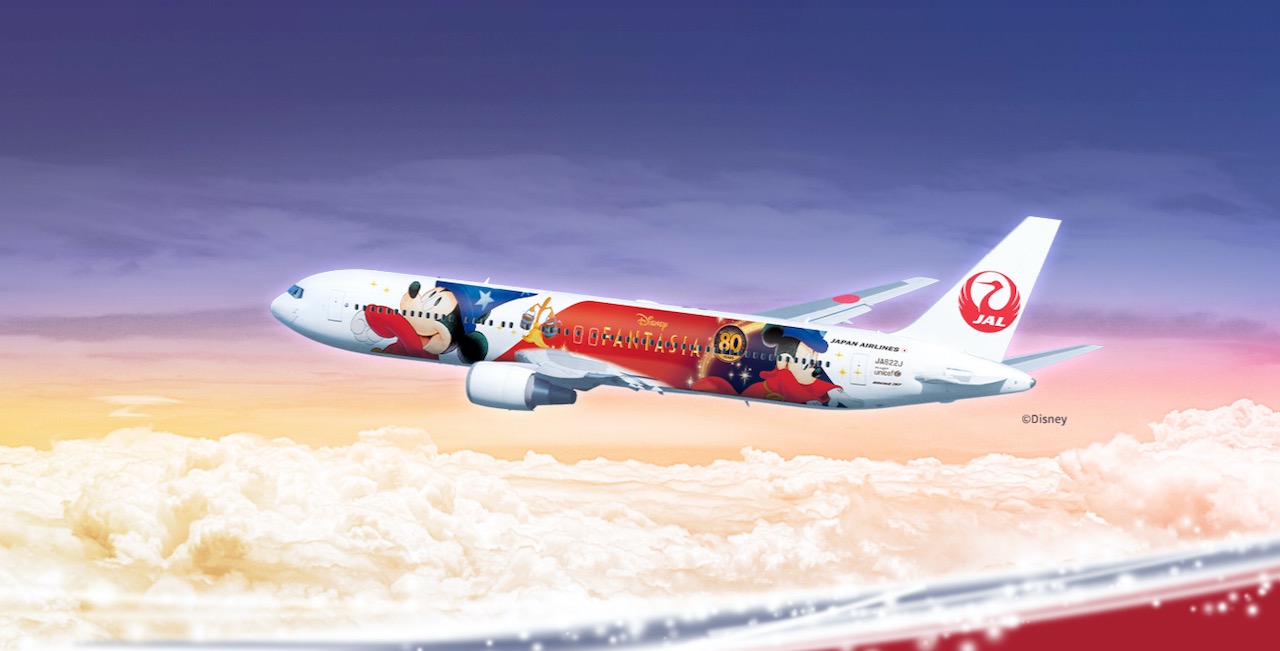 Japan Airlines, also known as JAL, has a long history with Disney, sponsoring Star Jets from opening day 1983-2017 and Mickey’s PhilharMagic since at Tokyo Disneyland, and the Broadway Music Theater (home of Big Band Beat) since opening day in 2001 at Tokyo DisneySea. So it’s no surprise that often, JAL will take on special airline liveries to match with Disney, including for special occasions like Tokyo Disney Resort anniversaries or Mickey Mouse’s 90th birthday just two years ago! Now its latest commemorative livery celebrates the 80th anniversary of Fantasia‘s November 13, 1940 release date!

The sides of the jet feature Mickey Mouse in the legendary “The Sorcerer’s Apprentice” sequence as he makes magic and a bit of mischief! The Fantasia logo as well as one broom appear on each side.

Each and every seat is fitted with a special headrest cover a moment in “The Sorcerer’s Apprentice”.

There’s three different kinds—two with Mickey and one with a broom.

Travellers will also be served their beverages in these limited edition cups that change from flight to flight. As with the headrest covers, these each depict Mickey in various levels of mischief as he attemps to keep the mischief at bay.

The JAL DREAM EXPRESS FANTASIA 80 will fly domestic-only routes in Japan through March 2022. Its base of operations will be Tokyo’s Haneda Airport, from which the DREAM EXPRESS will fly to Osaka-Itami, Fukuoka, Naha, and Sapporo-New Chitose Airports.

If you want to fly aboard the latest iteration of Japan Airlines’ DREAM EXPRESS planes, you will have until March 2022, but better make it a domestic trip within Japan or else you might miss out!