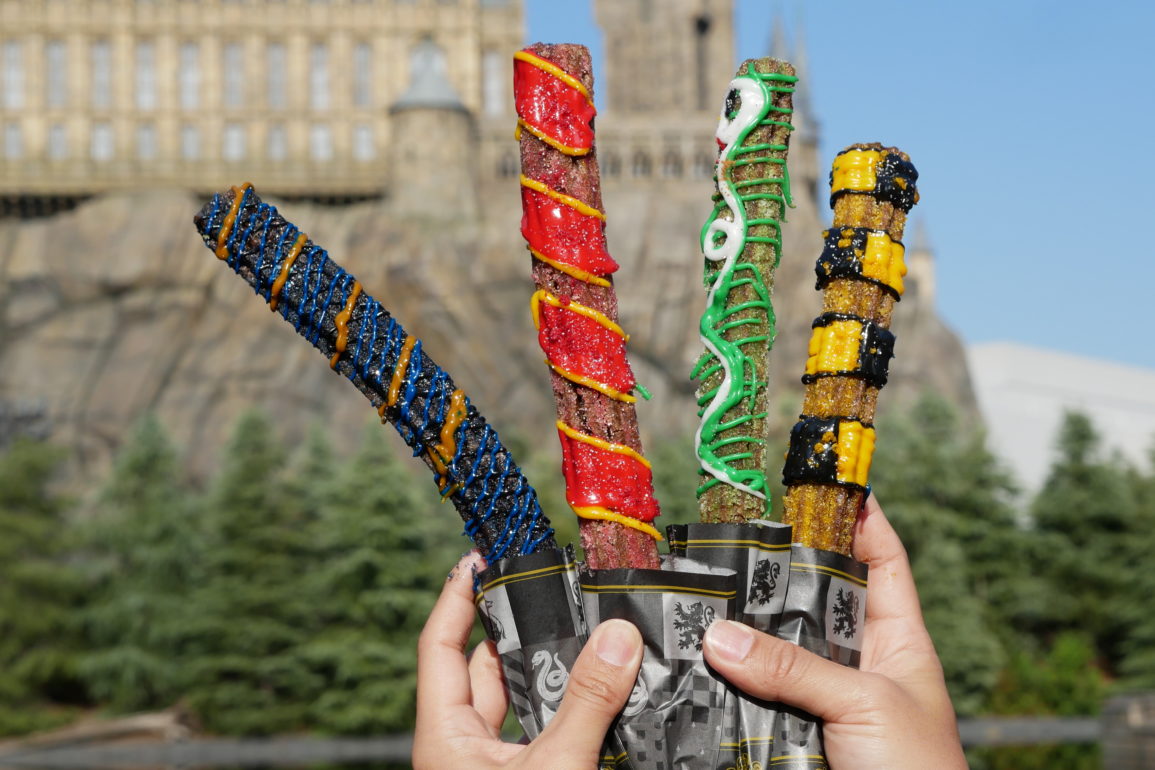 Grab your Quaffle and trusty broomstick, it’s Quidditch season at Universal Studios Japan! Whether you’re the ultimate Harry Potter fan or listen to your crazy friends talk about it, you know every budding witch or wizard attending Hogwarts School of Witchcraft and Wizardry is admitted to one of four houses—Gryffindor, Hufflepuff, Ravenclaw, and Slytherin. And now you can show off your pride for your house this winter with the new Hogwarts House Churritos on sale at The Magic Neep cart in Hogsmeade at Universal Studios Japan!

These Churritos were announced as part of the holiday festivities just a couple of weeks ago, so we knew that we’d need to try all four when they went on sale! Outside the cart every day is this board with signs desinged to look chalked on featuring the two Churritos of the day, in this case Gryffindor and Hufflepuff. Only the Gryffindor Churrito is sold daily while the opposing team changes between the other three houses.

All four Churritos prominently feature icing and sugar to correspond with their house’s colors. I bet you’re wondering how they taste? Well don’t worry, we tried all four of them!

With a raspberry flavor and icing, the Gryffindor Churrito is the only one to be sold daily. Featuring red raspberry sugar and topped with red and gold icing to match the house’s colors, there’s no mistaking this one for anything else!

And it’s probably for the best that this is sold every day, because of the four it was my favorite. The hefty sugar helping atop the chocolate Churrito base and the flavored icing makes this one a definite winner. No matter what time I ordered this, it was always hot and fresh, a welcome change from my previous Churrito experiences at Universal Studios Japan. Definitely don’t sleep on the Gryffindor Churrito!

Each of the four also comes in these grey and black wrappers featuring the four house animal icons and the school seal in gold, front and center.

Drizzled in blue with a few bronze lines, the look definitely captures the spirit of Ravenclaw. The problem comes when you bite in to it. The flavor is so unclear that I actually had to ask a nearby Crew Member what it was, which wasn’t the case for any of the other three. The sweetness was less pronounced, with the base chocolate standing out and the lightly sweet berry flavor only becomes apparently once you hit the half of the Churrito without icing on it. Also beware the blue sugar from the bottom, because it will get everywhere and stain your fingers if you touch it.

With yellow and black patterns to symbolize the badger house, the larger amounts of icing help augment and boost the flavor here like with the Gryffindor Churrito.

Also like the Gryffindor Churrito, this one tends to come out covered in so much sugar that you can’t see the base underneath! Now you might think that honey lemon is a bad flavor for a churro, but it came out surprisingly alright! The sweet and tangy flavors came together in a proper balance that complimented rather than confused. That being said, one of these will probably be enough. It’s not the worst of the four, but you won’t likely be craving another of these.

Featuring a snake-like green and white patter across the top half, this devious Churrito represents the cunning house itself. Top to bottom, this Churrito is covered in muscat grape-flavored sugar.

And like your stereotypical Slytherin, this one is far more pleasing on the eyes than inside. A muscat grape Churrito produces an overly sweet and strangely iflavored sensation, particularly on top of the chocolate churro base. For those who don’t know what muscat is, it’s closest to a white grape flavor with an extremely sweet and overpowering palate. I question why they chose muscat rather than something else green like apples or even melon soda. But seeing as they didn’t, I cannot recommend highly enough that you avoid the Slytherin Churrito.

All four of these are available on alternating days at The Magic Neep cart within The Wizarding World of Harry Potter at Universal Studios Japan for ¥600 ($5.73) each. As mentioned earlier, Gryffindor is available daily but the other three rotate out. There’s no telling how long these will be here or if they’re permanent, so be sure to touch your broomstick down at Universal Studios Japan and show off your House pride on your next visit!