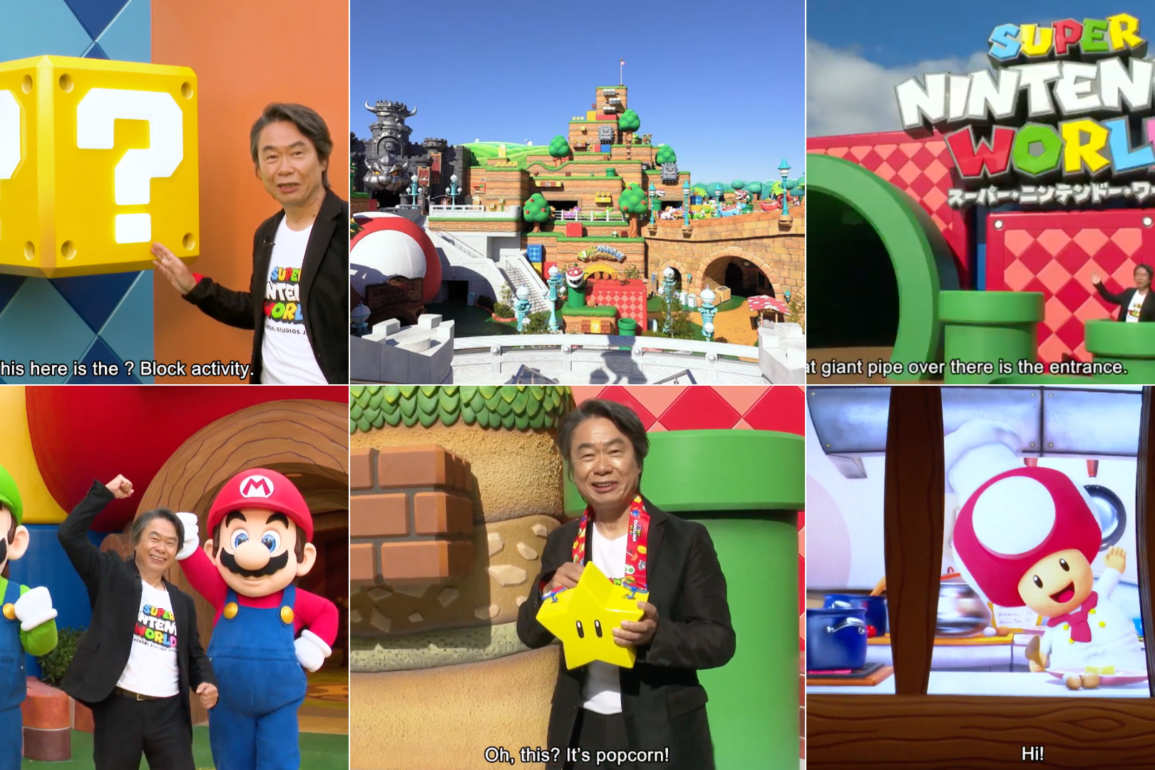 PHOTOS, VIDEO: Adorable Food, Tons of New Details, and Everything Else You Need to Know from Today’s Super Nintendo World Nintendo Direct Livestream

Today, Nintendo shared an exclusive first peek inside the exciting new Super Nintendo World expansion opening February 4th, 2021 at Universal Studios Japan in Osaka. From the new food to special details on interactive elements throughout the land, there’s so much new information that we learned today! You can watch the full livestream below, or keep on reading for a rundown of everything we saw! Super Mario’s creator Shigeru Miyamoto hosted this special tour of the land.

The entrance to the land features a huge pipe, iconic to the series. The pipe’s interior features LED lights on all sides that gives Guests a feeling of transportation into the land. There were so many ideas that it was almost an attraction itself, but it became just a walking tunnel.

When Guests enter the land, they come in through Peach’s Castle lobby. Portraits on the walls are reminiscent of different elements throughout the series, particularly the Super Mario 64 portrait portals. The room plays a reorchestrated version of the Peach’s Castle theme from Super Mario 64, and the game’s iconic sun tiles are even on the ground.

The land’s interior features tons of moving elements and motions. Yoshis, Goombas, shells, Thwomps, Piranha Plants, coins, and much more are moving throughout the surrounding structure of the land and make Guests feel immersed in the real Mushroom Kingdom.

The land’s entrance also features a small Peach’s Castle exterior and a Super Mushroom pattern on the ground.

There are a number of interactive activities throughout Super Nintendo world, starting with something as simple as the iconic ? Blocks.

When in the land, you can wear a Power-Up Band (sold separately) to interact with different elements in the land, and link it with your smartphone via a scannable QR code on the bottom. Elements like ? Blocks will grant Guests coins or other items that can be used via their app.

Interactivity is a major feature of Super Nintendo World, and things as simple as punching ? Blocks can grant Guests coins.

Miyamoto also demonstrated an activity to receive a key coin. As we mentioned last month, Guests who gather three keys with their Power-Up Band can experience a battle with Bowser, Jr. There’s a bit of a knack to these mini-game activities, which adds a sense of challenge for all ages!

Some activities, Miyamoto also chose to bypass in order to preserve some mystery for Guests.

There is popcorn on sale inside the land, one of the buckets is a Star from the game, with a lanyard that features a number of Mario elements along with the land logo. There are two flavors of poporn—caramel peach, and mushroom.

The land’s gift shop is called 1-Up Factory.

A number of Super Nintendo World-exclusive items will be available for Guests to purchase, along with traditional items like character caps.

One of the land’s signature items is Tokotoko Mario, a special toy created by Nintendo for the land. When you push the red shell forward, Mario walks without any need for batteries.

Mario and Luigi will greet Guests and have articulated heads for speaking basic lines.

The restaurant is called Kinopio Cafe, and is housed inside a giant mushroom building. Kinopio is Toad’s name in Japan.

The cafe is run by the Toads, and video screens in the order area and seating feature the Toads hard at work creating food for Guests.

Guests can see all the menu items available on the wall.

New entree items available only at Kinopio Cafe include the Mario Bacon and Mushroom Burger and a Super Mushroom Pizza Bowl.

Other items include a salad and cheese appetizer and a cake with cookies bordering to make it look like a ? Block.

Dining interior area features a mushroom aesthetic, with plenty of seating to accommodate large numbers of Guests at once. The ceiling has lighted versions of Mario items and power-ups.

Super Nintendo World is confirmed to come to Hollywood, Orlando, and Singapore as well. No opening windows announced for any of the three.

Mario Kart: Koopa’s Challenge is located inside Bowser’s castle.  It’s an augmented reality (AR) attraction that Nintendo and Universal collaborated on together to create.

Inside the queue, atop some steep steps is a large, foreboding statue of Bowser himself.

Inside, there’s also a display of familiar trophies from the Mario Kart series, as well as a special Universal trophy for the course Guests will drive on. Next to it is a challenge letter from Bowser.

Guests board actual karts from the series and ride in pairs to experience this immersive attraction. In previous releases, Universal detailed that Guests will be able to interact with the course through throwing virtual objects at other drivers, as well as the fact that the ride will change every time. Guests aren’t even guaranteed to win when they ride!

Super Nintendo World is scheduled to open February 4th, 2021. We will be in Osaka following the opening and covering every single detail, so be sure to stay tuned here to Universal Parks News Today for the latest news on what is likely to be the most exciting theme park expansion of 2021!