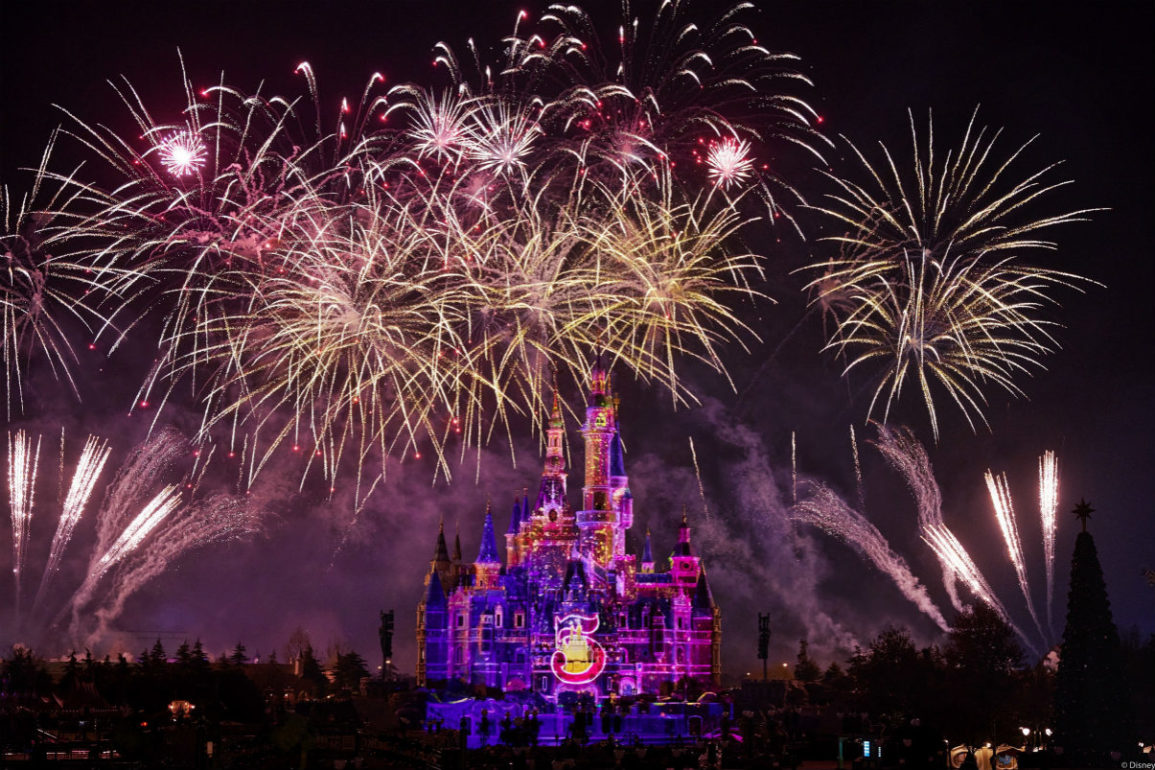 Shanghai Disney Resort welcomed the New Year in grand Disney style, with a celebratory nighttime show including special fireworks, culminating in the surprise reveal of its Fifth Anniversary logo. The debut of the logo, which illuminated the world’s largest Disney castle, marked the start of the resort’s milestone Fifth Anniversary year, and hinted at the many celebrations and surprises in store for guests, as the resort begins to countdown to the Fifth Anniversary of its historic opening in June 2016. Disney guests and fans across the country and around the world are eagerly anticipating the celebrations and magical offerings that famously accompany a major anniversary at Disney resorts worldwide.

“It has been an incredible five years and we are thrilled to be approaching such a significant milestone,” said Joe Schott, President and General Manager, Shanghai Disney Resort. “We have been truly humbled by the warm welcome our guests have given us since our Grand Opening, and we cannot wait to give back to them with a spectacular assortment of magical moments, celebrations and so much more.”

To welcome in 2021, the resort hosted a special New Year’s Eve fireworks show – “Ignite the New Year” – at Shanghai Disneyland’s Enchanted Storybook Castle. The exclusive New Year’s Eve show featured spectacular fireworks, stunning projections, dazzling lights, and the debut of brand-new music. During the spectacular, fireworks lit up Shanghai’s night sky with the shape of a giant “2021.” Mickey Mouse and Minnie Mouse then wished everyone a ‘Happy New Year’ full of surprises, before officially unveiling Shanghai Disney Resort’s Fifth Anniversary logo on the castle – bringing everyone the first surprise of the New Year.

The Fifth Anniversary logo features Shanghai Disneyland’s iconic Enchanted Storybook Castle silhouetted against a brightly colored number five, with added sparkles to bring depth, dimension and a sprinkle of Disney magic to the festivities. As a tradition at Disney parks and resorts, Shanghai Disney Resort’s Fifth Anniversary will immerse guests in an exciting yearlong celebration, with the logo appearing in a variety of forms across the resort, as well as alongside new characters and experiences.

Over the past five years, tens of millions of guests have made magical memories, been on wild adventures, and had their dreams come true at Shanghai Disney Resort. The Fifth Anniversary celebration will introduce guests to more surprises, treats, offerings and experiences than ever before, and guests will find enhancements at every turn, including an entirely new arrival experience that delivers a smoother, friendlier park entry even before the celebration officially starts.

Shanghai Disney Resort has recently been sharing major progress on their upcoming Zootopia-themed land, which will hopefully open before this milestone anniversary.

Previous
TONIGHT: Don’t Miss Our Livestreams from EPCOT & Disney’s Boardwalk to Ring In 2021, Plus Enjoy Classic Fireworks and Disney Music All Night Long!