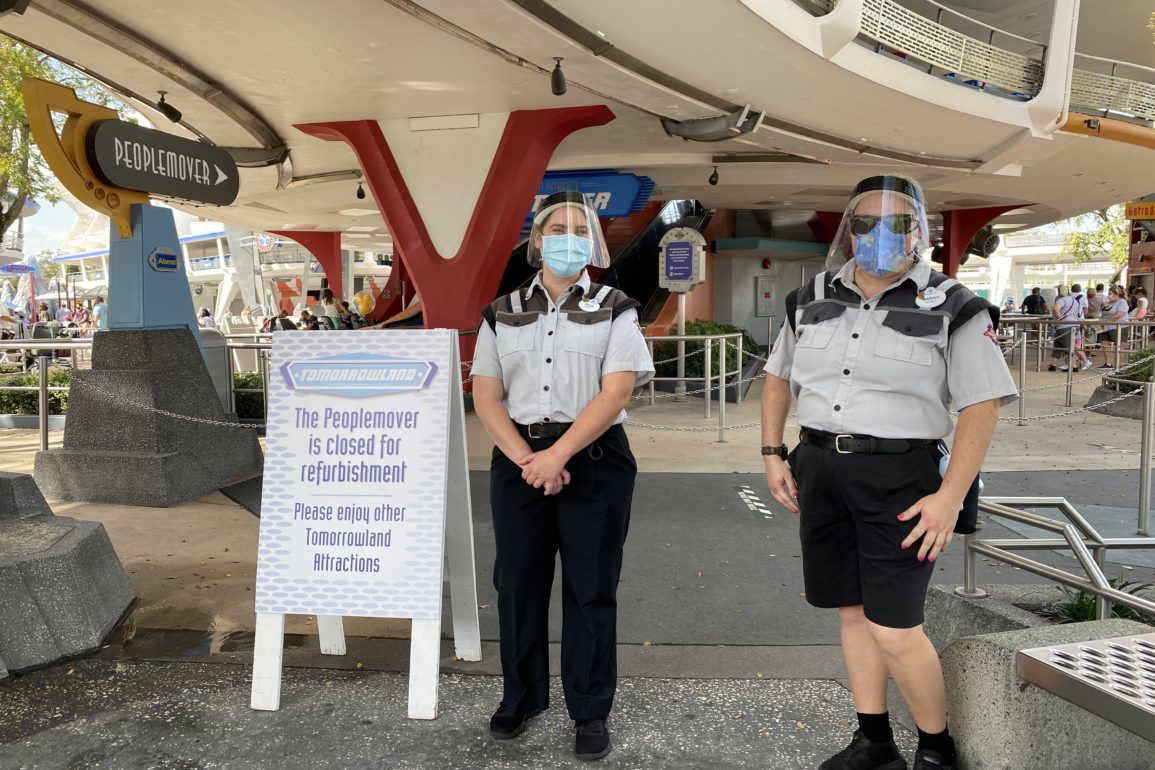 Hello from an absolutely beautiful day here at the Magic Kingdom! With such beautiful, stereotypically Floridian winter weather, we had the perfect day to go check out what might be new at the park. Let’s get started!

While we found new construction walls had been erected around the queue of Peter Pan’s Flight just yesterday, this morning we saw that those walls had been extended further to cover more of the building. For more pictures and information, check out our article here.

The construction boxes covering the feet of these supports in Tomorrowland haven’t changed since their installation.

Work continues on Bonjour! Village Gifts, with the small awning on the side of the building appearing to get a new roof.

We spotted Cast Members testing the Tomorrowland Transit Authority PeopleMover today along with the repairmen we’ve been seeing the past few weeks. We also saw the return of Cast Members to the attraction’s entrance, although they say they don’t know when it will reopen.

When the Liberty Square Riverboat reopened last week, we noticed that it’s whistle was considerably quieter than it was before it’s refurbishment. We asked a Cast Member about it, and we were told that because it’s an actual steam whistle, the weather and humidity effect it, and it was only quiet because it was a cooler, damp day. It’s been several days now, and it’s warmed up considerably, but we still think the whistle is significantly quieter now than it was before it’s refurbishment, as do Cast Members who work on land nearby the Rivers of America.

While the mailboxes were removed during the park’s closure last year for refurbishment, one has reappeared. This one, closest to City Hall in Town Square, is now back in place for letters to be mailed from the Most Magical Place On Earth.

New cupcakes have arrived at The Confectionery, with a “his and hers” option in red icing, perfect for Valentine’s Day. The Minnie cupcakes on the left are red velvet, and the Mickey cupcakes on the right are vanilla.

We found some new merchandise to share with you, starting with this new picture frame. Featuring a metal outline of Cinderella Castle from which your picture will hang, this piece is available at The Emporium for $34.99.

We found several additions to the Valentine’s Day shirts in the MaDe kiosk today. First was this Marvel themed shirt featuring a partial sketch of Iron Man’s helmet and the phrase “We Love You 3000”.

We also found three additional Mickey and Minnie themed Valentine’s Day designs. All shirts are customizable and start at $29.99.

Our favorite find of the day was this Limited Edition pin featuring Pascal, which is the latest in the “Where Fantasy Grows” Terrarium Series. This was just one of several Limited Edition pins we found today, so be sure to check out our article for pictures and details about them all.

We had a great day at the Magic Kingdom, and we hope you enjoyed coming along with us. Have a magical day!