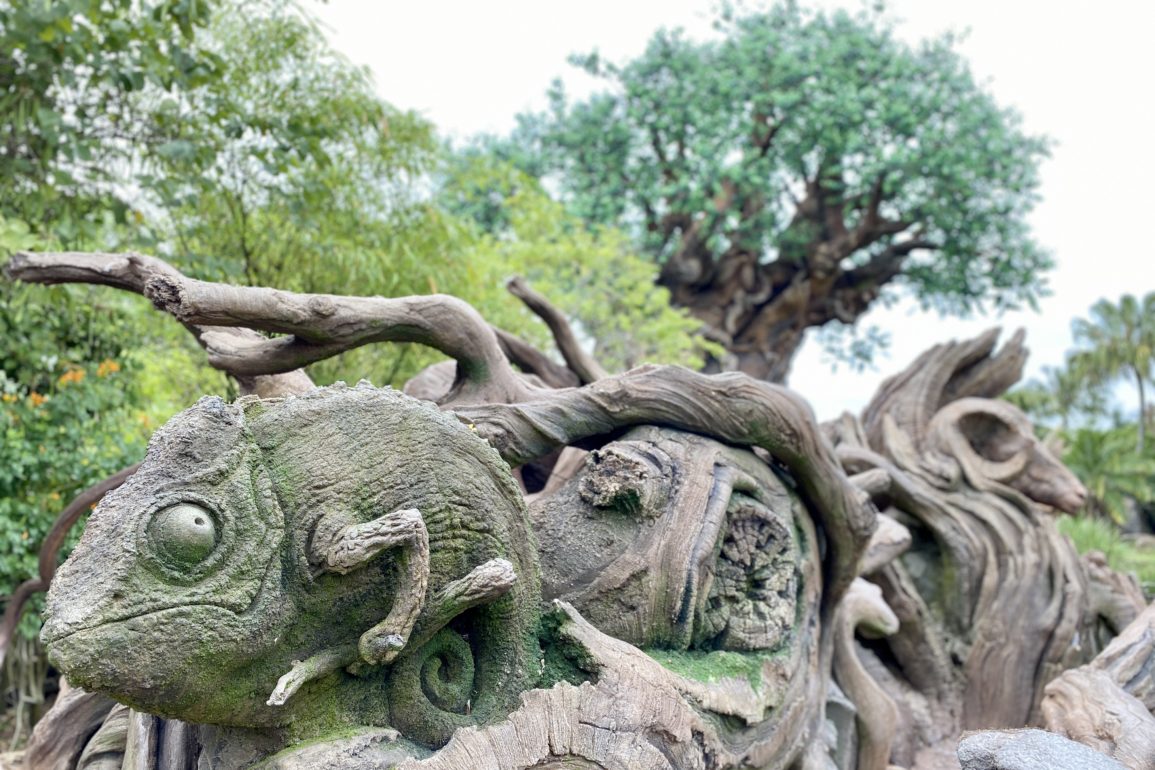 Hello from a cooler and breezy Walt Disney World! The heat has finally taken a break for a few days, and we made good use of the cooler weather by checking out two parks today. We started our day in EPCOT and took a look at the construction projects happening around the park. Let’s get started!

This morning we saw work being done to one of the Harmonious screen barges. It appears that some sort of screening was being added to the arm of the barge. Similar screening can be seen on the massive Harmonious centerpiece ring as well.

A little later in the morning, we saw water features being tested on one of the other barges.

As with most of the parks, EPCOT has its fair share of pavement work going on. Today, we found a fresh patch of concrete in the Canada Pavilion. These stanchions were removed shortly after the park opened.

While the pavement work continues in the France Pavilion, we did notice that the small sections of scrim had been removed from around the base of this iconic tower, revealing a new footing.

Decorative elements have been added above the windows of La Gelateria in the Italy Pavilion. For more pictures and information, check out our article here.

We took a ride on Gran Fiesta Tour in the Mexico Pavilion and found two new things amiss, in addition to the missing animatronics in the final scene. The audio track for this screen was not matched up to the action, making the action happen in silence, and the audio emits to no action.

Next, we found a dancer doll from the town scene had been removed. There is normally a doll wearing a blue poncho in the foreground in between these two, spinning to the music. Today he was missing from the scene.

While we were in the Mexico Pavilion, we found this new Mickey Mexican flag Tervis tumbler.

Next, we checked out Mouse Gear, where we found this rendition of Forky from “Toy Story”. This is a plush keychain retailing for $12.99.

We also found another utility keychain to add to the collection that we found at the Magic Kingdom yesterday. This one featured Minnie Mouse and retails for $12.99 as well.

Before we left the park, we hopped on the Disney Skyliner and visited Disney’s Art of Animation Resort. There, we found that the Big Blue Pool had its refurbishment completed is now open to guests.

We also found this adorable cupcake perfect for Easter and Springtime. Keep an eye on the site for our review!

We had a great time at EPCOT, but we weren’t quite done for the day. Next, we headed to Disney’s Animal Kingdom, where we were able to check out some of the new fun treats.

First, we tried this Expedition Everest Base Camp Macaroon. Not only is this treat adorable, but it’s delicious too! For more pictures and information, including our full review, check out our article here.

Next, we tried the Kiwi Margarita, available for a limited time to celebrate Earth Month. While this drink was not what we expected, we still enjoyed it! For more pictures and information, including our full review, keep an eye on our site.

We had a great time at Disney’s Animal Kingdom, and we had a lovely day at Walt Disney World. We hope you enjoyed coming along with us today. Have a magical day!

Previous
PHOTOS, VIDEO: Check Out the Latest Super Nintendo World Merchandise On Sale at 1-Up Factory