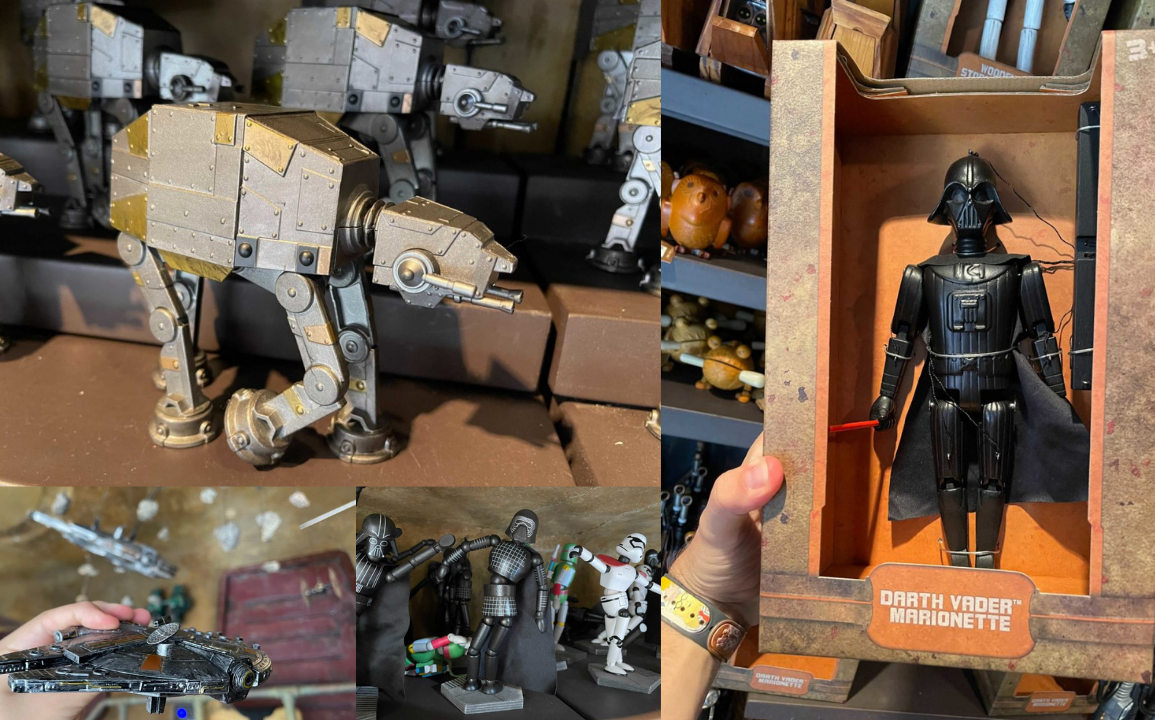 A recent trip to Toydarian Toymakers revealed a new assortment of exclusive goods for Star Wars fans to add to their hauls while shopping at Star Wars: Galaxy’s Edge in Disney’s Hollywood Studios. If you take the time to dig through Zabaka the Toydarian’s collection you can discover some all sorts of handcrafted and artisanal items, including an ominous-looking Darth Vader marionette and some pose-able rag doll figures. You can also snag smaller, metal & resin replicas of some of Zabaka’s toys to add to your Star Wars memorabilia.

A Darth Vader puppet has joined the assortment. The merchandising team finally realized how much we all wanted to own the prop toys made for the shop, so they have created replicas of these items. We’ll have to wait and see if the accompanying Obi-Wan marionette arrives soon as well.

A few, more modern characters have been added to the “rad doll” toy line. Original Trilogy Stormtroopers were available when Galaxy’s Edge opened.

This could be Poe Dameron, but it’s hard to tell.

Darth Vader is overjoyed to be joined by Kylo Ren.

In our eyes, the coolest additions are small replicas of the large, metal spaceship toys that hang from the ceiling or sit on higher shelves in the shop. These are sadly made of resin, but they look convincing at a distance.

The “real” thing hangs high from the store’s ceiling, seen above.

What I most wanted was the cool AT-AT up on the shelf behind the counter, and Disney has provided a version to take home now.

Sadly, it is not articulated like a real toy, just a replica statue.

I appreciate the detail under the feet.

The actual prop sits high on a shelf, see above.

Last, but not least, is a TIE Fighter.

The TIE Fighters do battle with the Millennium Falcon toy in the shop display. Now can we get full size, more detailed replicas, and maybe that Star Destroyer?

There has been a ton of new merchandise landing in Star Wars: Galaxy’s Edge lately, from The Darksaber and Boba Fett gear, to Rey’s Lightsaber and Droid Depot goods, so be sure to catch up on all that is avialble before you depart for Black Spire Outpost.