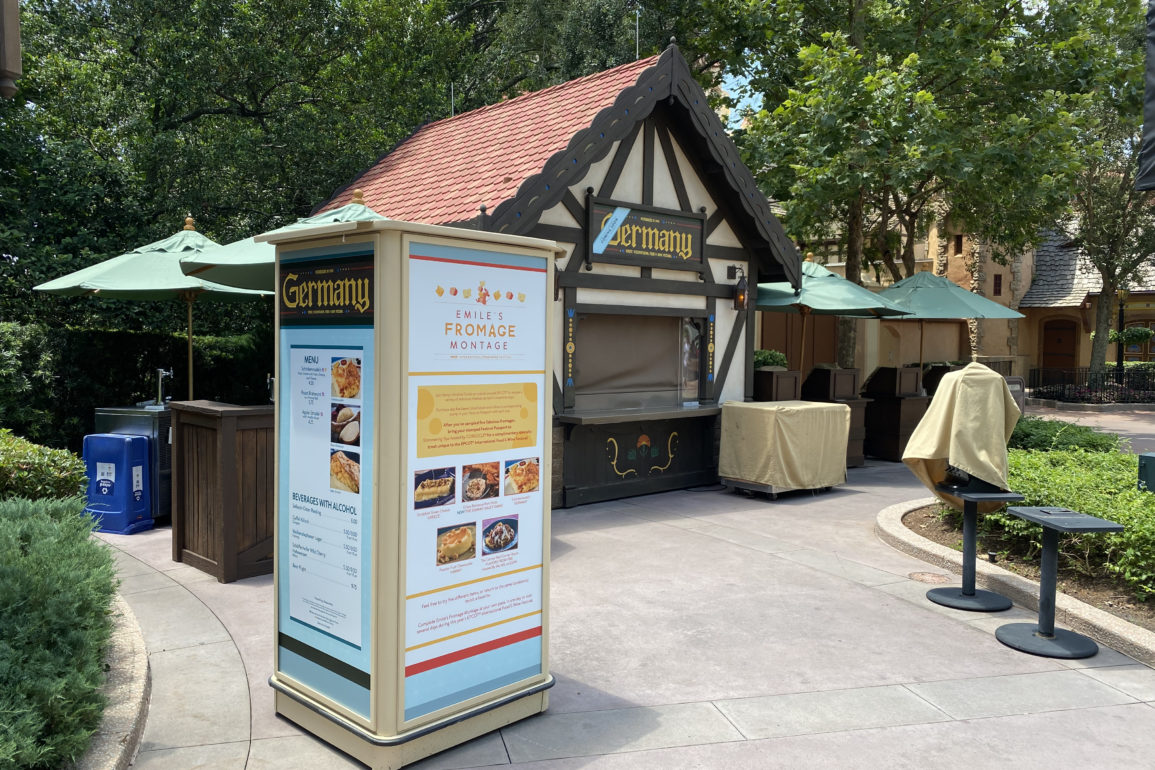 The pavilion flags we noticed missing yesterday have still not been put back where they belong.

Progress on Creations Shop is shaping up with the circular lighting fixtures seemingly completed as seen through the windows overlooking Test Track.

Installation on an automatic sliding door was ongoing, while we also noticed some possible merchandise displayers taking shape inside.

A few hidden Mickeys inside of Mission: SPACE!

A menu board for the Flavors From Fire booth was out while cast members began prep inside.

Over inside The Land Pavilion, the DAS and Rider Switch Distribution point for Soarin’ has been moved, following the move we saw in Frontierland yesterday. The previous alternative access distribution point was at the center pole in the middle of the entrance to the attraction.

Despite the Flower & Garden Festival Butterfly House removal underway, we spotted Pooh chasing those butterflies where he always does!

Elsa was out greeting princes and princesses today in Norway.

We began to see more International Food & Wine Festival signage and cast members setting up the interiors of various booths for the festival opening on July 15th.

The Alps and Germany Booth had their festival menus on display; stay tuned for more as preparations continue.

Germany and Flavors From Fire had Emile’s Fromage Montage on their menu boards as part of the experience.

Spain’s menu in front of the Italy pavilion was also set up.

One of the shops in Italy got a fresh coat of paint.

As we made our way into the U.K. pavilion, we noticed that Peter Pan and Captain Hook’s topiaries were removed.

Tinker Bell, Rabbit, Tigger, and Winnie the Pooh were still up and blooming. Kermit and Miss Piggy that were next to the pavilion were also removed.

Canada also received some Food & Wine Festival preparations, with a variety of apple trees dotting the pavilion with pops of crisp yellow and orange.

A rather spooktacular find at MouseGear, a Madame Leota shirt!

If you are feeling more fashionable, there is also this new pink rhinestone Mickey Hat.

Our last cool find of the day, the Mickey soap dispensers we found at Boutiki made their way over to MouseGear!

Thanks for following along with us on this sunny day we spent at EPCOT!