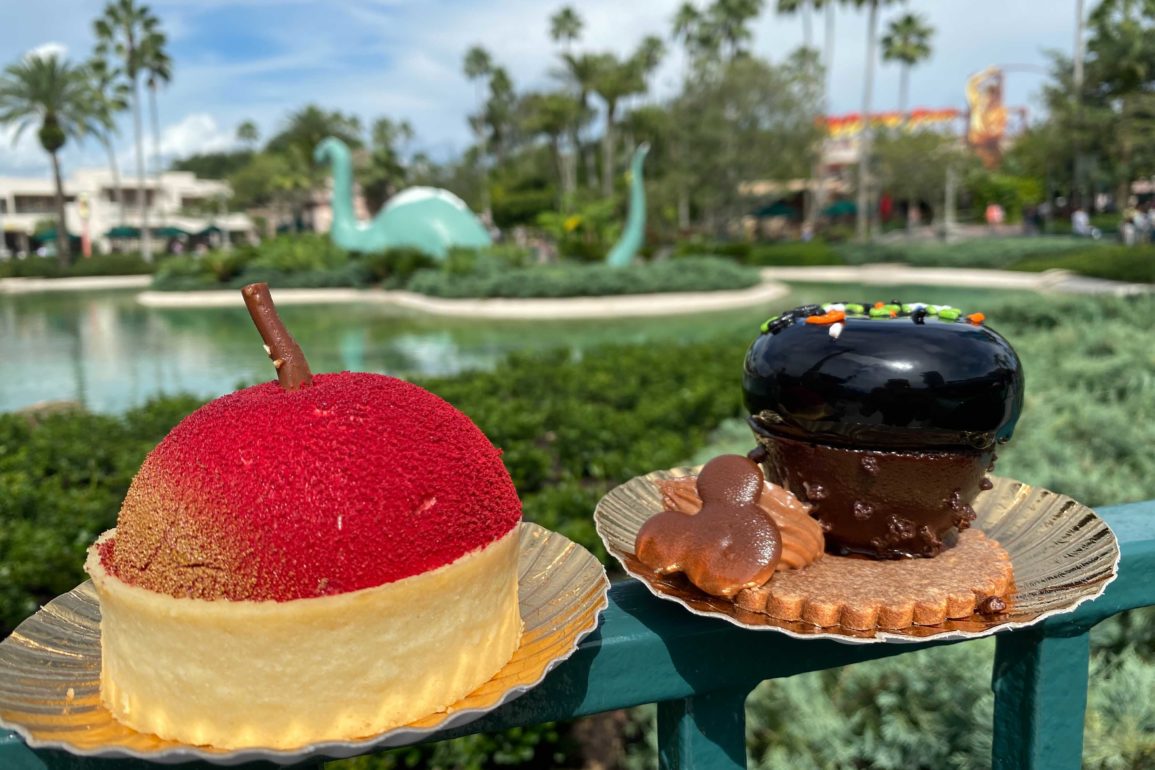 Even though it’s still August, Halloween is already in the air at Disney’s Hollywood Studios.

For chocolate fanatics, there’s a chocolate mousse. And if you’re looking for a more traditional fall flavor, there’s a caramel-apple tart.

This raspberry-dark chocolate mousse comes on top of a chocolate-almond cake, with a layer of hazelnut crunch and a dollop of whipped chocolate-hazelnut cheesecake.

It also comes with a Mickey Mouse-shaped chocolate piece to give it a Disney touch.

And to make sure we all know it’s a Halloween item, it’s finished with black icing and orange, black, white, purple, and green sprinkles.

Once you dig in, you can see there is a lot going on in this mousse. While it’s not listed anywhere, it comes on top of a brownie, which was very dry. The hazelnut crunch is a very small layer between the brownie and mousse. It has the consistency and texture of sugary peanut butter without any sweetness.

The raspberry-chocolate mousse is light, with just a hint of raspberry. The chocolate-almond cookie on the bottom is the same as the pumpkin mousse from The Trolley Car Cafe, which we weren’t fans of. The cheesecake was a very small blob in the corner under the chocolate Mickey and tasted like a basic chocolate cheesecake.

Altogether, there’s just way too much chocolate here, even for a chocolate lover. We wouldn’t get this again.

Perhaps even more terrifyingly, the icing layer on top showed no signs of melting even as the chocolate started to “sweat” in the Florida heat. Have the Disney bakers created a new monster?

This picturesque dessert is made with spiced caramel cheesecake mousse served atop a cinnamon apple tart.

The golden coloring is only applied to one side, leaving the other side a very bright red.

The apple’s “stem” is made of a simple chocolate, similar to the Mickey head in the chocolate mousse.

The tart’s crust was buttery and soft, with just a hint of crunch on the outside where it should be. Thankfully, the apples were also crunchy and not mushy with a hint of spice, but otherwise tasted like a generic apple pie filling.

The spiced caramel cheesecake had a really interesting flavor. It tasted similar to chai tea with a little caramel.

The red “dust” on top has an extremely artificial flavor. It may look nice but can be tough to eat.

It’s not terrible, but its red dust and powdered chai flavor detracted from the quality. Overall, we’d pass on this one.