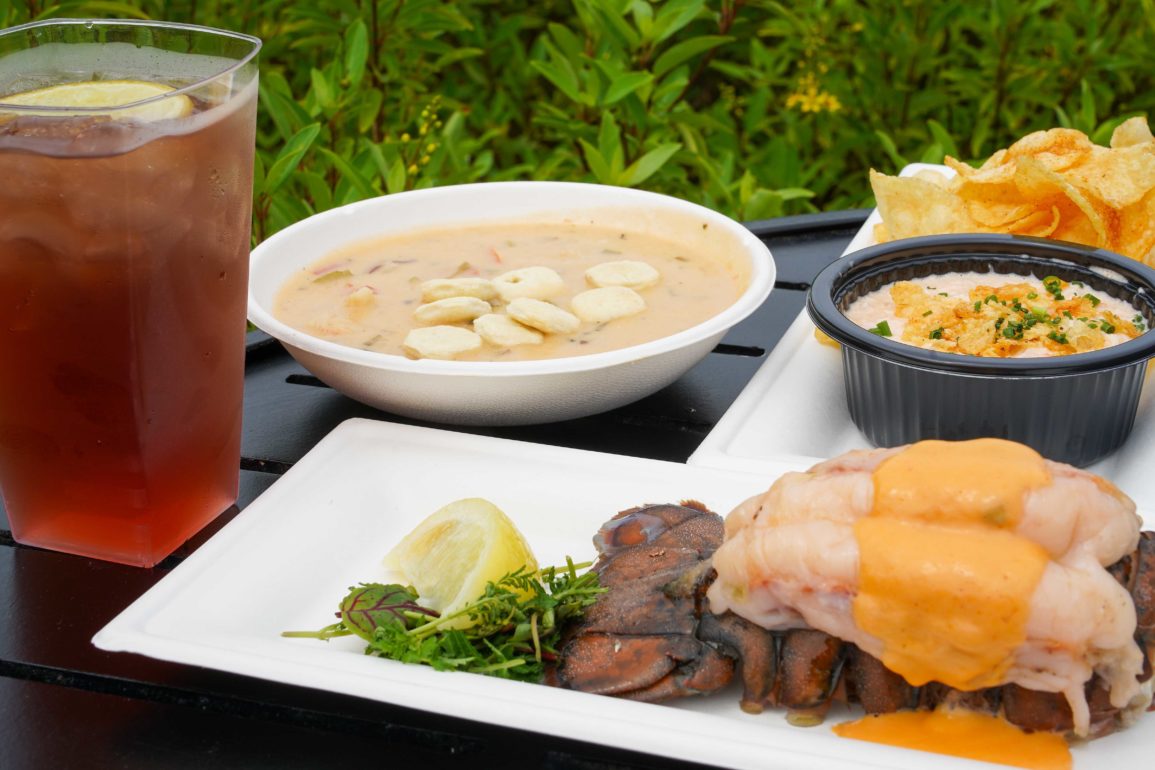 Lobster Landing has made its debut early at the EPCOT International Food & Wine Festival 2021. Originally slated for an October 1 opening, the new booth has opened today alongside several other offerings.

This was an appropriately-sized and well-cooked lobster tail; you’re getting the real deal from Lobster Landing. The meat was tender and easily cut. The flavor was subtle and not fishy, also signs that this is of relatively good quality. The bisque sauce was disappointing; it was thin and lacked flavor. We would have preferred drawn butter like you get at Hops & Barley. That being said, good lobster doesn’t need sauce. This was our favorite dish here.

This was an average dish, in line with our expectations. It wasn’t terrible, but we won’t be going back for it again. The spice was very mild with a subtle flavor. The lobster in the dish is sparse in quantity and the meat is similar to knuckle and claw, so it’s a little tougher. We didn’t see or taste any tail meat. It was a basic bisque, aside from the few pieces of lobster.

The chips are basic kettle-cooked chips with mild Old Bay seasoning. The dip is okay; it has a strong mayonnaise taste and could benefit from some cheese or another layer of flavor or texture. We wouldn’t come back for this, either.

From Steenberg: “This Sparkling Sauvignon Blanc is made to be fun, fruity, and fresh. The nose is full and intense, with aromas of granadilla, summer melons, and a hint of lime. The palate is light and smooth yet with a zippy acidity to lift the tropical flavors of pineapple, pear, and guava. A fresh brightness rounds off a delicious and refreshing sparkling wine, a perfect drink for a hot summer’s day.”

From Sean Minor: “Our Central Coast Chardonnay is a light golden straw hue and displays aromas of pear, apple, tropical citrus, and pineapple with subtle notes of vanilla. On the entry, crisp, vibrant flavors of guava, pear, and green apple integrate well with a touch of minerality, and a medium body mouth feel. These flavors linger to provide a full and lengthy finish.”

The Cape Codder is a basic cranberry and vodka. The cranberry is a little watered down, and we wish the juice was a little sweeter to cut the tartness.

From Coronado Brewing Co.: “What is a boat beer? It’s a canned beer that’s crisp, versatile, and refreshing. It’s the perfect blank slate. Throw a lime in it, make it bloody or spice the rim for a classic twist. It’s a beer that goes where no glass can. Whether you’re on or off the boat, this beer will take you back to days spent finding refuge in the sea.”

Lobster Landing is located by the upcoming Creations Shop next to Mac & Eats, at number 31 on the map below.

Which dish are you going to try first at Lobster Landing? Let us know in the comments below!