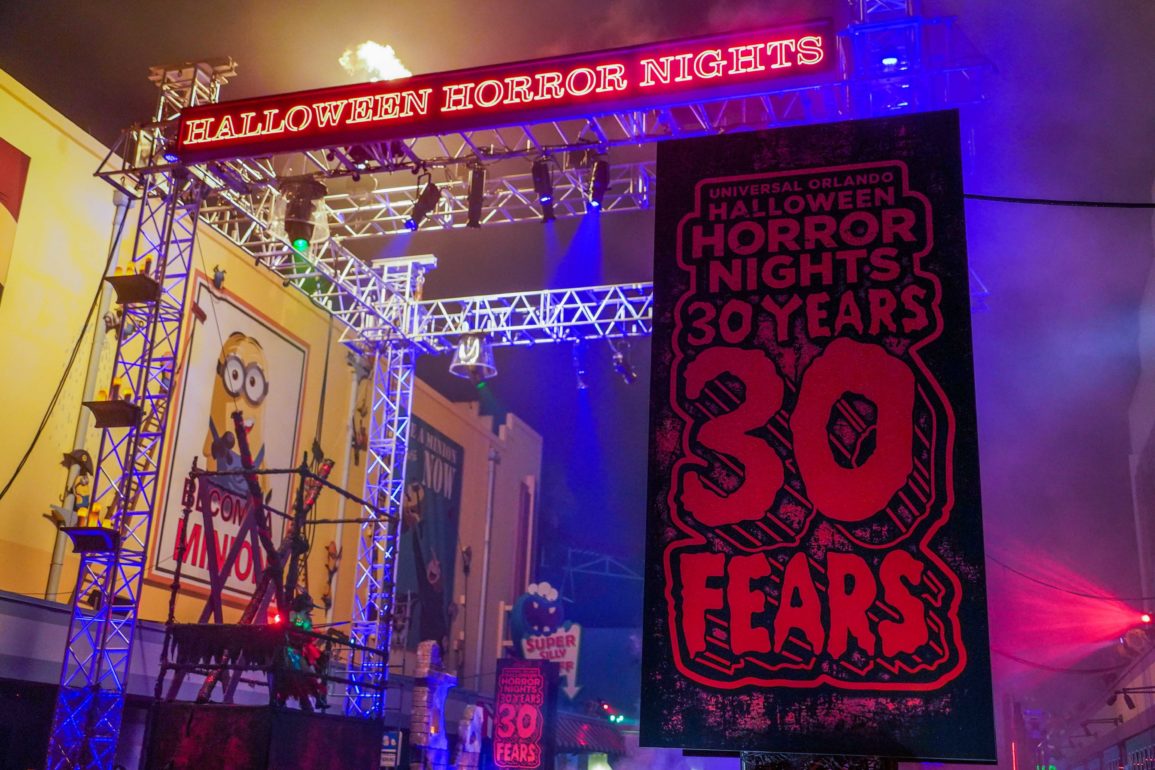 30 Years 30 Fears was designed to be a giant party zone celebrating the 30th anniversary. Long-time fans or readers of our retrospective series may remember that Universal often had a “party zone” of sorts, including one filled with foam. This brings that essence back in a more modernized form.

It even brings the return of the neon Halloween Horror Nights sign.

Characters from the three decades of Halloween Horror Nights history appear here, including the Pumpkin Head pictured above. The Pumpkin Heads are Scareactors that have appeared throughout the years in various houses and zones.

Masquerade guests from 2014’s MASKerade Unstitched scare zone return to the Plaza of the Stars as part of the rotating Scareactors on the small stages.

Bone and Blood, stiltwalkers from HHN 27’s Festival of the Deadliest, also appear. Pictured above and below is Bone.

And pictured below is Blood.

Up on the platform, two more references to Horror Nights’ past can be found. The large Xes are similar to those seen in 2010’s Twenty Years of Fear. The Scareactor atop the platform is a Succubus. The Succubae have made multiple appearances but originally debuted in 2003 in the Port of Evil.

Gordon from 2018’s Twisted Traditions also takes a turn on the stage.

The iconic Halloween Horror Nights fog, fire effects, loud music, and a variety of characters greet you at the entrance to Universal Studios Florida. Dancers can be seen on platforms up above, and different characters take over the two stages. The stilt walkers and other walk-around characters make for more great photo-ops. It serves its purpose and truly gets you hyped.

Watch our video of the 30 Years 30 Fears scare zone below.

Location of the Scare Zone at Halloween Horror Nights 30

The 30 Years 30 Fears scare zone is located in Production Central, as indicated by the orange star on the map below.