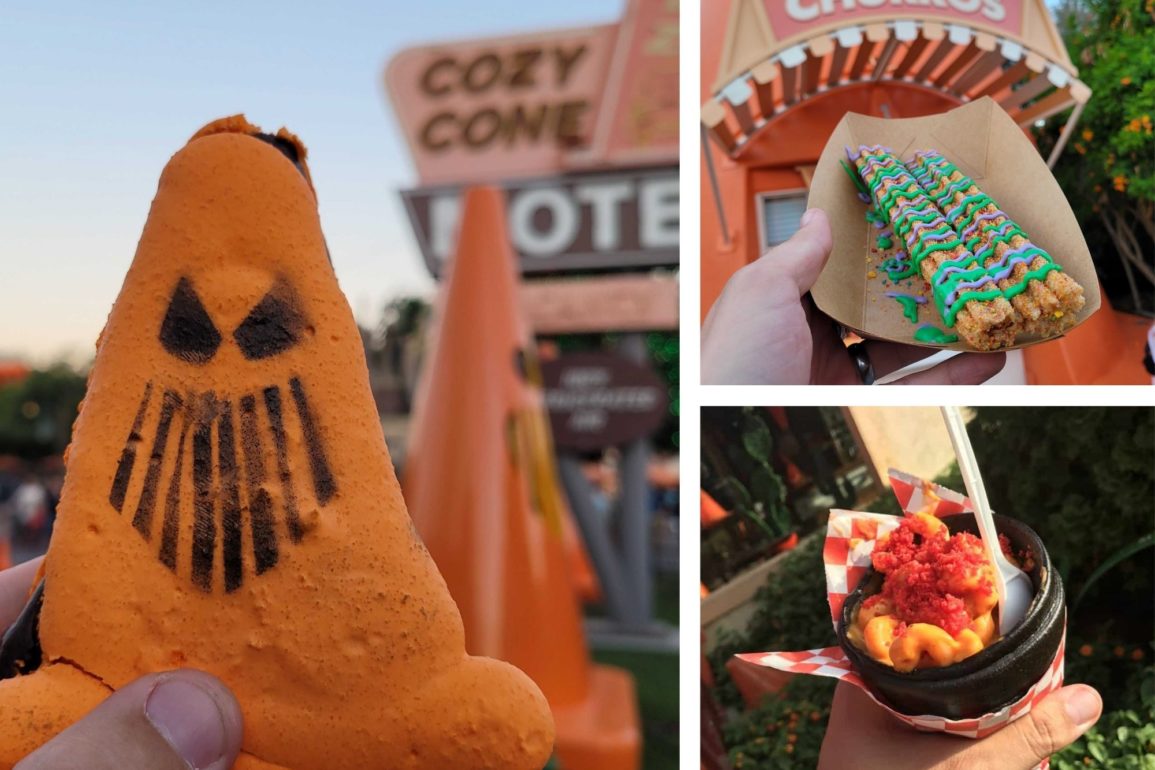 Come get your kicks on Route 66 and cruise into the Cozy Cone Motel for three limited time Halloween treats at Disney California Adventure. The Spicy Mac & Cheese Cone returns alongside the new Fruity Sugar Churro and Cozy Cone Macaron.

Previously known as the Slow Burnin’ Mac & Cheese Cone in 2019, we are thrilled to see this return. It’s fantastic. A spicy version of the solid Disneyland counter service mac and cheese with a lot more flavor from red pepper cheese sauce. The bread cone wasn’t bad either.

When they say fruity cereal sugar, what they mean is ground up Fruity Pebbles, which are sweet on their own. This churro is lacking actual sugar, and the frosting just doesn’t fill the void. It’s sweet, but it kind of makes things less crisp and takes away from that “first bite into a fresh hot churro” feeling. Overall, not terrible, but not a standout.

Oddly enough, these are printed with the face of Cozy Cone number 2 (ice cream cone booth), despite coming from Cone 5. This macaron is very delicate, crumbling under its own weight. The pretzels inside do give some rigidity, but the exterior shell and the chocolate ganache form around your fingers as it melts into your hand. It’s very rich; the chocolate ganache is decadent. There’s not a whole lot of the chocolate, which is what saves it from going overboard. The center is a peanut butter cream lined with salted pretzels. For chocolate peanut butter fans, this is a must. The pretzels bring some saltiness that I didn’t think I wanted until it was there. We’d order this again.

Next
PHOTOS, VIDEO: Tour the New Magic Key Lounge Inside the Starcade at Disneyland