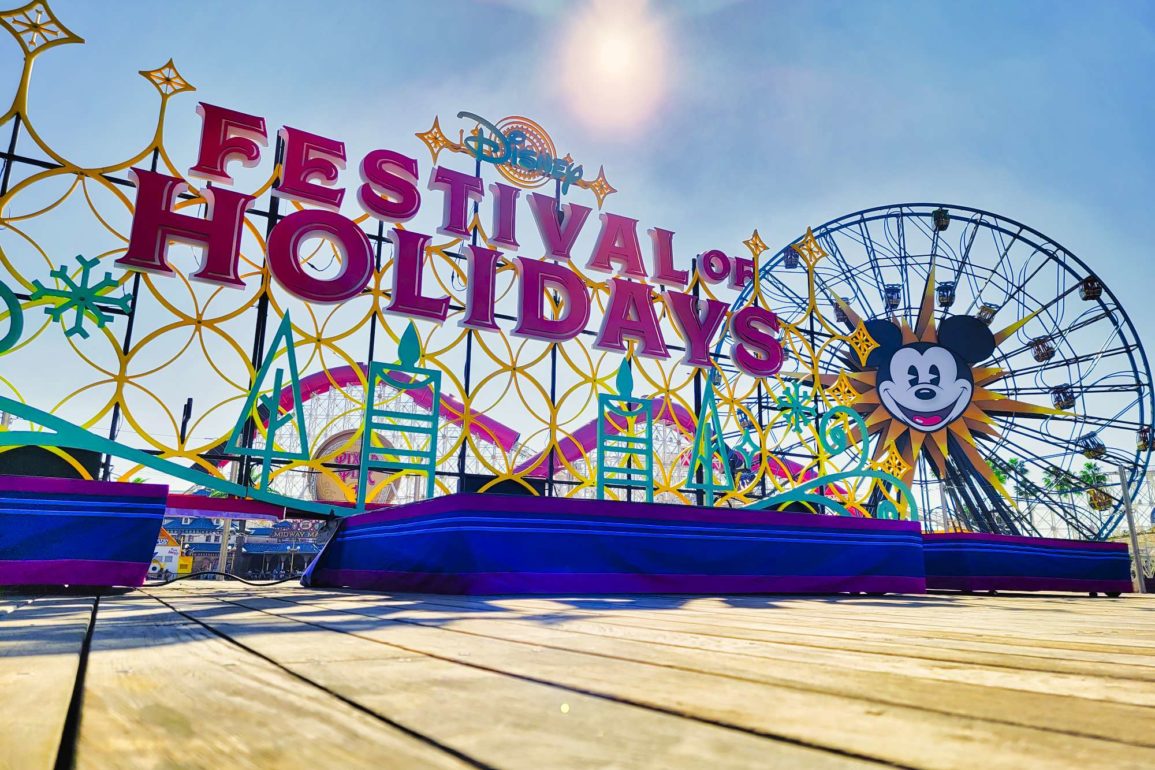 Hey there, hi there, ho there! We’re back for another beautiful day at Disneyland to walk off all the Halloween candy we just had. So join us as we leave the goblins and ghoulies of last Halloween and move headlong into Christmas all over the parks in this particularly large photo report.

We found a lot of NEW at the parks today as they transition between themes. These Holiday banners on the tram walkway (soon to be tram driveway again in 2022) are all about the celebration to come.

Backstage but seen through the scrim, the Mickey pumpkin that was just removed sits next to the Christmas tree that’s about to be installed.

At the site of the former ESPN Zone, a new Disney+ ad showcases The Book of Boba Fett among other new offerings from the service.

Over in World of Disney, we found lots of new merchandise. This Avengers sweatshirt is longsleeved with a short sleeved top over it.

The nuiMOs Rapunzel has made her way to Downtown Disney and is ready to dress up in her best outfit.

There are also a couple of new outfits inspired by “The Mandalorian.”

These Spider-Man pajamas for kids are fuzzy and warm, and come with a matching pillow to snuggle up with.

This awesome new bubble wand features Mickey Mouse through the years in film cells, as seen below. It lights up and blows bubbles to delight and amaze both kids and adults.

The majority of the new merchandise today is from the new holidays collection. Major decorations have taken over most of the displays in the store.

Lots of the merchandise we’ve seen already are from the Walt’s Holiday Lodge collection, and this is the particular lodge in question.

We found lots of new Holiday apparel, housewares and more at both parks and in the stores of Downtown Disney. Take a look at a selection of them here, and click the link to see everything with prices.

Note his holiday sweater has a Mando helmet snowflake and a mudhorn insignia embroidered on.

And down at the Star Wars Trading Post, there’s a whole new collection of First Order merchandise for kids and adults.

Inside Disneyland, the pumpkins are almost entirely gone and the garlands are moving in. Here on the train station, they have already sprouted up here and there.

A few straggler pumpkins sit in the windows above the new holiday display inside the window of the Emporium. Let’s get a closer look at that.

Inside the Emporium, we found the much-anticipated Wishables collection Advent calendar.

At the 20th Century Music Company, there’s a new mystery pin set of gingerbread houses from some notable Disney icons.

There is also a collection of pins celebrating the 20th anniversary of “Monsters, Inc.”

This super cute coat is from the “Alice in Wonderland” 70th anniversary collection featuring the art of Mary Blair. The lining on this jacket is really a statement piece of its own.

The castle is fully covered in icicle lights now, just waiting for the right moment to illuminate.

“it’s a small world” has received its Lightning Lane entrance sign while it is down for the holiday overlay installation.

And up in Toontown, Roger Rabbit’s Car Toon Spin has also received its Lightning Lane sign.

They really spared no expense with this one.

The attraction is all decked out for the holidays and this Santa Roger wreath is just perfect for the season.

Elsewhere in Toontown, the decorations are covering mantles and windowsills all over town.

Mickey has decorated for the season.

Daisy’s Diner hasn’t been open since the park shuttered in March 2020, but it still gets a nice garland.

Behind all the holly jolly décor is the massive building for the upcoming Mickey and Minnie’s Runaway Railway.

Critter Country is getting into the holiday spirit as well.

In Pooh Corner, Rabbit has decorated a tree with all of his favorites.

And, of course, Pooh has a tree as well.

Down in New Orleans Square, it was a beautiful day as the marine layer started to burn off.

More and more holiday decorations are popping up.

The new mystery venue is being decorated inside behind veiled windows, but the upper windows are starting to show the signs of a voodoo workshop.

Big Thunder Mountain Railroad has opened from its refurbishment early, soft opening for guests this evening. We will have to catch it when we head to the park next time.

On Batuu, we found some new supplies at the Resistance outpost on Savi’s Path.

DCA is slower to jump to Christmas than Disneyland is, but there are some signs of the approaching holiday. These windows on Buena Vista Street are installed but the mechanics are not turned on yet.

There was some really cute new Marvel merchandise, marking the first Christmas that Avengers Campus has seen.

This is what we imagine Cap would lounge in between saving the Earth and training.

Another Christmas window on Buena Vista Street, this time at Trolley Treats. The trolley isn’t moving along the tracks yet, but hopefully soon.

Inside Trolley Treats, we found the classic gingerbread cookie and a Santa Mickey cookie already available in the bakery case.

At Julius Katz and Sons, ornament decoration is available for that personalized holiday must-have.

Paradise Bay is still drained for maintenance of the World of Color equipment.

But the Festival of Holidays is on the way, and that’s what we’re really interested in. This food festival offers up some of the tastiest bites of the year and we can’t wait.

This one was in the process of being installed near Paradise Park and had no sign affixed.

We stopped in to Carthay Circle Lounge for a last spooky treat that is both a nice send-off for Halloween and just a good Fall-flavored drink. The Poison Apple-tini is available for a limited time, and it comes with a yellow poison apple glow cube.

Back to Christmas stuff. Radiator Springs has put up some posters for favorite holiday movies from the Cars universe.

Fillmore’s Taste-In is surrounded by a psychedelic scrim. Hopefully this is for the repainting that it so desperately needs.

For lunch, we mobile ordered the Impossible Spoonful from Pym Test Kitchen and received this cool button, available now through Nov 6.

Finally, we took a stroll down the meandering trails of the Grizzly Peak Recreation Area and found that the local wildlife are prepared for the winter weather. These bears are all bundled up in their holiday sweaters, despite the relatively warm Southern California temperatures.

Thanks for joining us today. We’re glad you rode along. Check back with WDWNT for more from Disneyland. We’ll see ya real soon!

Next
Disney Very Merriest After Hours Sold Out November 16 and 18, December 21 at Magic Kingdom