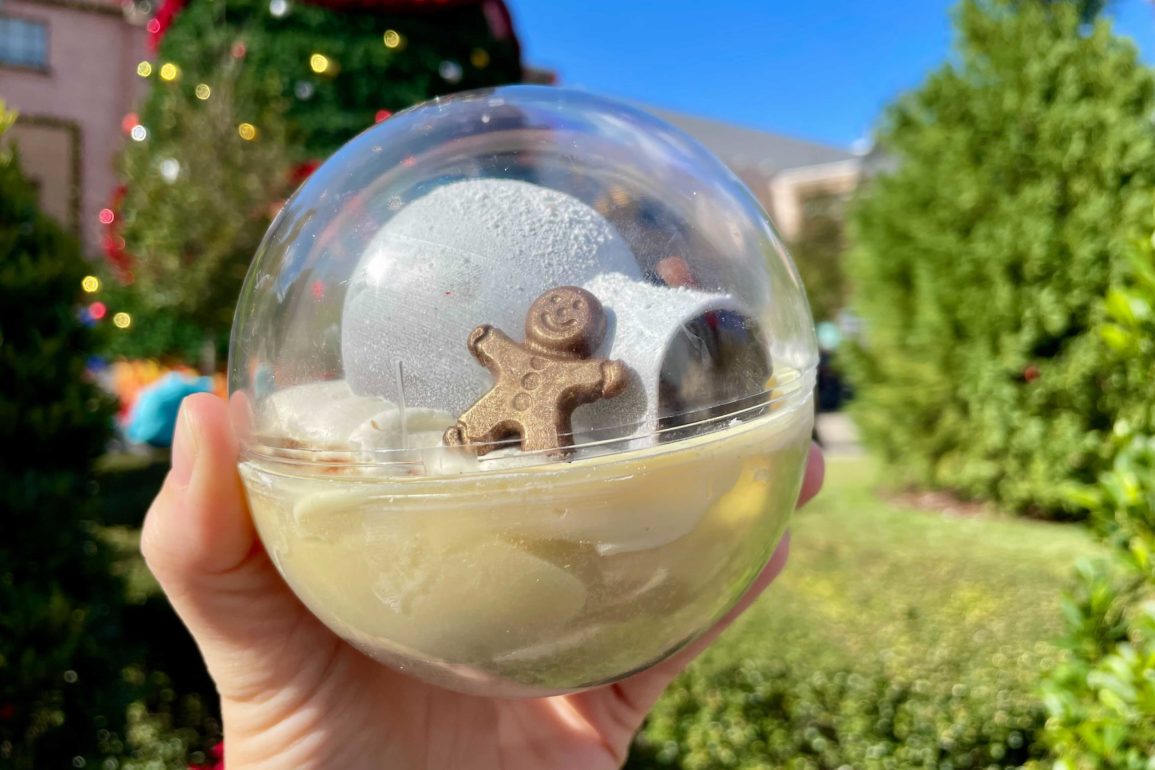 Sweet treats are everywhere now that the holidays have arrived here at Universal Orlando Resort. The Holiday Tribute Store at Universal Studios Florida has an impressive case of snacks, but the adorable snow globe cakes caught our eye. They come in vanilla, chocolate, or red velvet flavors with different fun scenes. We liked the winter wonderland scene in the vanilla snow globe, so we decided to give that one a try first.

The concept is good, but the execution is poor. The plastic globe on ours wouldn’t stay together, so the Team Member used a few pieces of tape to hold it in place.

We risked it all and removed the tape for photos.

Outside, we removed the top portion of the failed globe to admire the chocolate igloo and gingerbread men. It’s absolutely adorable.

There’s a layer of white chocolate on the bottom of the globe, making this cake difficult to eat. It’s hard to break the white chocolate shell, so we just ended up digging out the actual vanilla cake and frosting.

The cake had a good flavor but was extremely dry. It was disappointing that the cake was dried out, but the frosting helped cover it up. The vanilla buttercream frosting here is fantastic, so you could really put it on anything, and it would be edible. Thankfully, the frosting saved the cake.

Each chocolate piece was delicious, so we enjoyed smashing into the igloo and devouring the chocolate shell.

Overall, this cake is a cute idea, but it really fails to impress when it comes to taste. We would suggest trying one of the Christmas tree brownies or Earl’s cake jars rather than this snow globe cake. Or take a trip to Battery Park for one of their sweet pressed sandwiches or cookies and milk instead!

Previous
Guest Emails Piling Up, No End to Multi-Hour Phone Waits In Sight for Guests of Walt Disney World