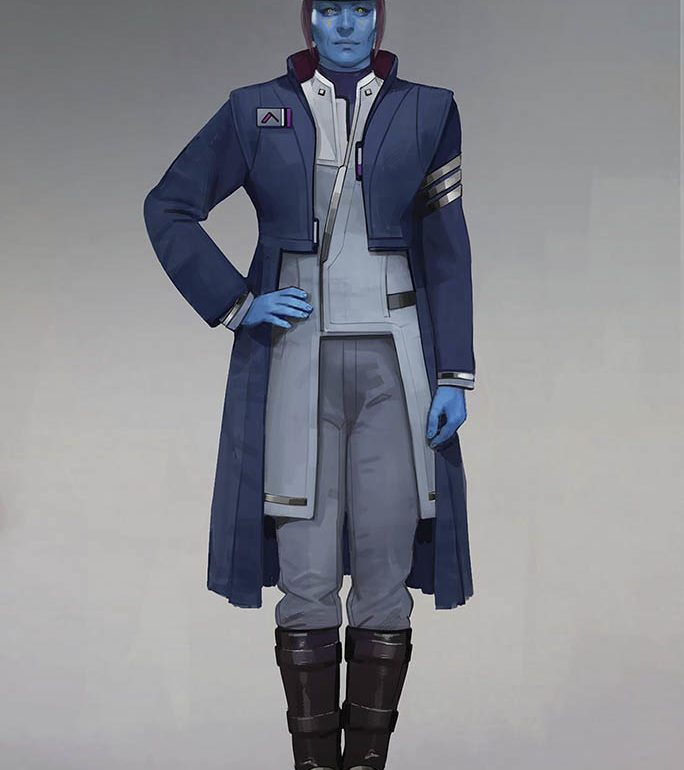 With Star Wars: Galactic Starcruiser opening early next year at Walt Disney World, StarWars.com has revealed a glimpse at some of the new characters guests will encounter on the one-of-a-kind experience.

As a Pantoran, Keevan’s striking blue skin sets her apart at a glance. With kind eyes and an iron will, Keevan is a strong and decisive leader who genuinely loves the Halcyon. In fact, she started as a quartermaster on the ship she now commands. The Halcyon has long been her home, and when the First Order comes calling, she will do whatever it takes to protect her passengers, fight for the moral good, and ensure everyone has an unforgettable time.

As the go-to crew member for maximum fun aboard the Halcyon, Mok does her best to keep activities running smoothly from muster to destination. As the captain’s right hand, she’s in charge of onboard entertainment, ensuring each voyage is an adventure, and she takes pride in bringing joy to every passenger.

Mok’s astromech is also her assistant cruise director, keeping activities running efficiently as only a droid can. And newcomers will quickly find that he’s among the first members of the ship’s crew to reveal a more nuanced story. It seems Mok’s devoted droid companion is hiding a secret.

A droid you may see appear on holoscreens, D3-O9’s primary function is running ship logistics, so you can bet that she knows everyone and everything happening onboard during any given voyage. Built centuries ago by Chandrila Star Line’s founder, D3 has seen the ship — and the entire galaxy — evolve, giving her a unique front-row seat to the vast history of the galaxy. She’s not shy about sharing her wealth of knowledge.

If you happen to wander into Oga’s Cantina, the local watering hole at Black Spire Outpost inside Star Wars: Galaxy’s Edge, and you know how to read Aurebesh, a help wanted sign posted on the wall there might catch your eye. There’s long been a starcruiser in need of a mechanic. But now it seems the Halcyon has found someone for the job.

More of a stowaway than a real mechanic, Sammie hails from Han Solo’s home world of Corellia where he learned the basics of working a hydrospanner. What he lacks in skill he makes up for in charm and enthusiasm, convincing passengers and other crewmates to help when the Chandrila Star Line’s jewel needs a tune up. Plus, he speaks Shyriiwook, which could come in handy if a Wookiee happens to find his way onboard.

The struggles of the galaxy cannot be totally avoided even on a pleasure cruise. When there are stormtroopers to be found pacing the Halcyon’s halls, you can bet First Order Lt. Croy is near. His suspicions stoked by a pattern of strange activity — everywhere the Halcyon docks, the First Order spies a spark of resistance — Croy will stop at nothing to complete his investigation and hold Keevan and everyone else in his sights responsible for the civil disobedience. Ambitious and intimidating, Croy’s special assignment makes him a person of interest whether you’re a rebel sympathizer, a rigid proponent of First Order rule, or a simple traveler making their way in a galaxy at war.