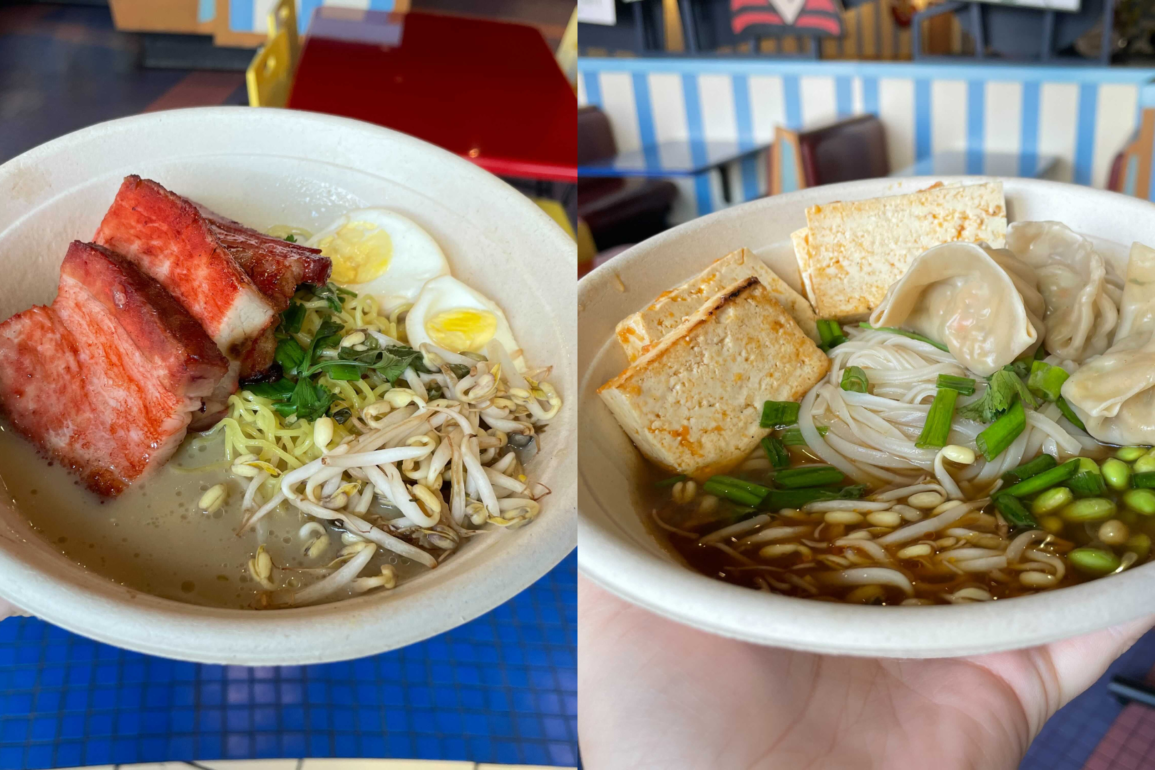 Ramen fans rejoice! A new menu has debuted over at Comic Strip Cafe in Toon Lagoon and there’s a variety of unique offerings, including ramen. The menu has gotten a complete overhaul to include multiple ramen, rice bowls, dumplings, arepas, and more.

Take a look at this menu. It sounds pretty impressive, so we decided to stop in and try some ramen.

These large bowls of ramen come with your choice of Char Siu Pork Belly, Beef Bulgogi, or Edamame Dumplings. We opted for the pork belly. The noodles are served in a tonkotsu broth with tare egg, bean sprouts, scallions, and cilantro.

The noodles were traditional and exactly what you would expect, served in a rich, slightly salty broth. The pork belly was just too chewy and fatty for my personal taste, but the portion size is nice. The eggs were good, but more on the hard boiled side, so I’m not sure these would really be classified as tare eggs. The dish didn’t impress us overall, but we would probably give the ramen another try with the edamame dumplings or beef bulgogi.

The tofu ramen is served with vegan noodles in a miso broth, edamame dumplings, bean sprouts, scallions, and cilantro.

Universal Orlando has really been knocking it out of the park lately with their vegan offerings. After trying so many new dishes lately, including the Herbivore at Burger Digs, we’ve really been leaning towards ordering the plant-based meals when in the parks. We enjoyed this tofu ramen much more than the pork belly.

The tofu was cold and had some sort of added seasoning on it. Even though it was good, the edamame dumplings and noodles were the real stars here. We could eat these edamame and dumplings all day long. They’re amazing. The miso broth and vegan noodles are both very different from the other bowl. The rich flavor and chewy texture of the noodles were excellent. We actually liked these noodles best between the two bowls.

For an extra $3, you can make these dishes a combo with an egg roll or order one as a side for $2.99. Either way, this is very overpriced considering the egg roll we received was extremely dry and almost inedible, even with a heavy coating of duck sauce.

You might get lucky if you order one, but from our experience, we’re going to suggest you skip the combo.

In addition to these items, you can also find a variety of arepas, Asian dishes, and cheeseburgers. It’s nice to see this menu updated with such a wide selection of unique quick service choices. There’s a little something for everyone on this menu. If you’re looking to try something different at Islands of Adventure, stop by Comic Strip Cafe in Toon Lagoon and check out this new menu.

Next
VIDEO: Fans Recreate ‘Happily Ever After’ with Christmas Lights, Projections, and Flying Tinker Bell on New Jersey Home