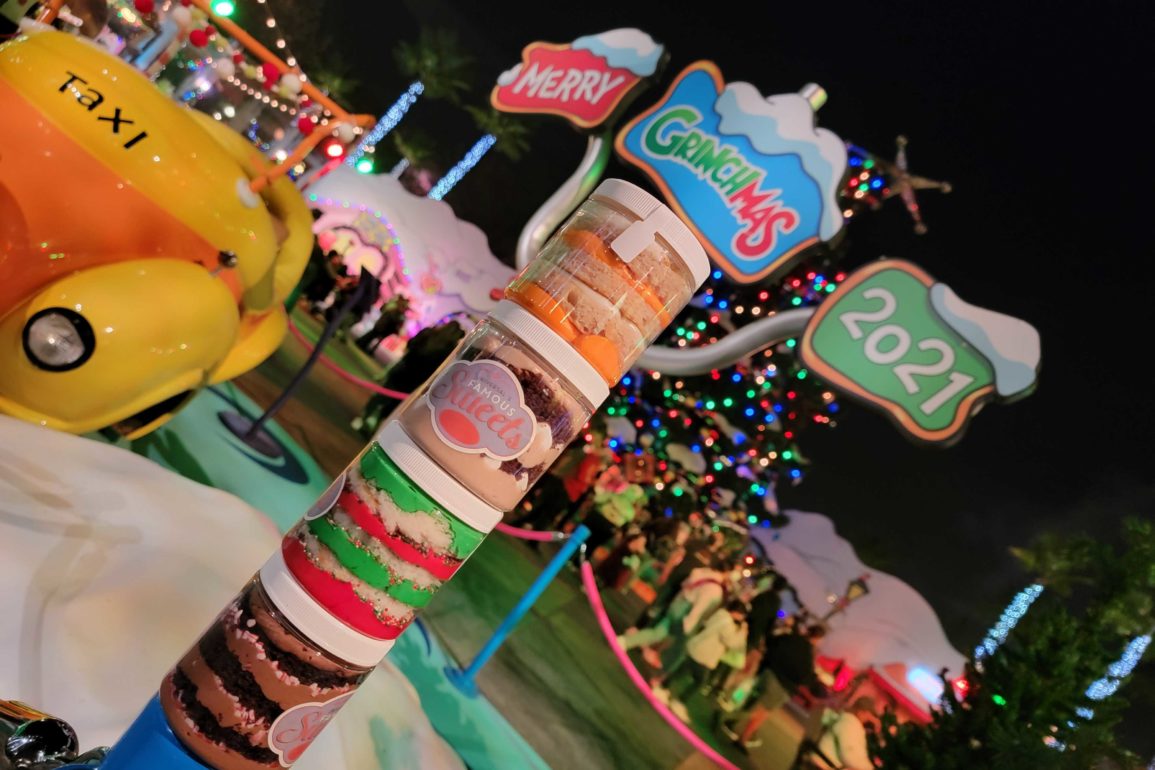 These cake jars are available at multiple locations but we picked them up at Studio Cafe. There are four options: vanilla, pumpkin spice, hot cocoa, and chocolate peppermint.

All of these cakes are super sweet, almost overpoweringly so. They have rich, dense frosting. And though the jars seem small, there is plenty of cake in each for one or two people.

This vanilla cake has a good flavor — like a sugar cookie. It’s definitely the most photogenic of the bunch with the layers of red and green frosting and the white cake slices in between.

The sprinkles give it a nice crunch, bringing a fun texture to the creamy treat dominated by the frosting. The cake slices, having not been refrigerated, were rather hard and dried out a bit. They weren’t stale, just not as fresh as you would expect. We didn’t have this problem with the other cakes though, so maybe we just happened to get an older vanilla cake. It’s so cute though that we would go for another jar just for more pictures.

The Pumpkin Spice one honestly tasted more like carrot cake. The spice came from the cake layers, punctuated by the same heavy frosting as the rest.

There is a subtle flavor of pumpkin. It’s predominantly sweet.

This one wasn’t anything spectacular but it wasn’t too bad either. We aren’t sure if we would get it again since some of the others do look and taste better.

The Hot Cocoa was the best of the bunch. It has chocolate cake slices and light chocolate cream frosting with mini marshmallows.

The marshmallows are in no way mixed in, so you get a real strong marshmallow flavor alongside the chocolate.

This is very good and probably the only one we would buy again based on taste alone.

The Chocolate Peppermint is the denser cousin of the hot cocoa cake jar. With a darker chocolate frosting, it’s a hearty dessert.

In all, it’s a heavier dessert than the others and, like the pumpkin spice cake jar, we probably wouldn’t get it again.

Overall, we definitely recommend the vanilla cake jar most for appearance and the hot cocoa cake jar most for taste. But no matter which one you choose, you’ll get a delicious holiday treat that will look perfect on your social feed.