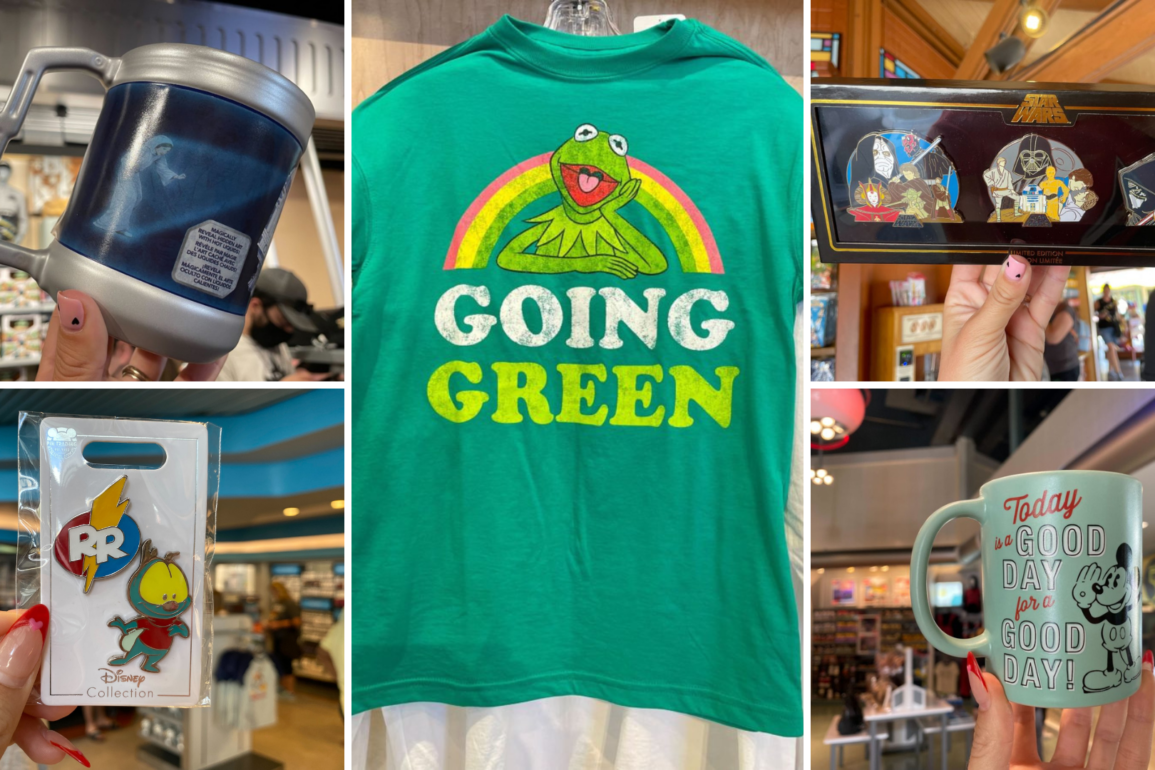 Welcome to the merchandise roundup for February 25, 2022! Each new day brings new merchandise to Walt Disney World, and we know you don’t want to miss a thing, so we gather new releases here. Today we visited Magic Kingdom, Disney’s Hollywood Studios, Disney Springs, and EPCOT; let’s look at our discoveries.

First up, we have this limited edition watch set inspired by both of the MCU’s Captain Americas: Steve Rogers and Sam Wilson.

It includes the watch and two pins.

This is available in Uptown Jewelers at Magic Kingdom.

There is one Sam Wilson pin and one Steve Rogers pin.

The watch features Captain America logos, including the shield.

This is a limited edition of 1,941, a reference to the year Captain America debuted.

This Luxe Logo mug was released on shopDisney but has only now made it to Magic Kingdom.

It’s black with a gold bottom and the 50th anniversary Cinderella Castle logo in gold on one side.

The Starbucks logo is printed on the inside.

Also in this Emporium was this serving tray, part of a new Mickey Mouse-inspired kitchenwares set.

It is patterned with embossed Mickey heads and arrow shapes.

This set of four glasses features circles around the sides along with Mickey silhouettes. We found this also at the Emporium.

Mickey and Minnie (below) were both in the Emporium.

We found this mug in both Star Traders at Magic Kingdom and Celebrity 5 & 10 at Disney’s Hollywood Studios.

It’s a light green color and says “Today is a good day for a good day!” in red and white lettering.

Mickey is pictured to the side of the letters.

This mug was also in Star Traders.

It says “Happily ever after” in script on the inside.

The outside is covered in different castles and buildings from Disney Princess films, such as Rapunzel’s tower and Prince Eric’s castle.

The handle is purple.

We found another Mickey Mouse mug at World of Disney in Disney Springs.

It’s white with silhouettes of Mickey in his different outfits over the years surrounding his face.

It has a black handle.

This baseball cap was also in World of Disney.

It’s a blue and white tie-dye with “Change your world” embroidered on the front. Mickey’s face replaces the “o” in “world.”

This mug and spoon set is inspired by the Beast from “Beauty and the Beast.”

The mug resembles his pouting face.

The spoon inside is yellow with two birds on the handle.

The beast’s blue ribbon is on the back of the mug, beneath the handle.

The final new item we found in World of Disney is this candle inspired by Marie from “The Aristocats.”

The outside of the candle holder is light pink in a quilted design, with “M” on some of the embossed dots.

Marie is outlined on top with her pink bow.

The candle has a French vanilla scent.

At Marketplace Co-Op. in Disney Springs we found this Cinderella Castle-shaped tray.

It has the castle pictured on the inside.

It is in the kitchenwares section of Marketplace Co-Op.

This three-pin set has a limited edition size of 3,000.

Each pin represents one of the “Star Wars” trilogies. The first has Darth Maul, Anakin, Obi-Wan Kenobi, Yoda, Queen Amidala, and Emperor Palpatine for the prequels.

The second pin has Luke Skywalker, R2-D2, C-3PO, Han and Leia, and Darth Vader for the original trilogy.

The third pin has BB-8, Rey, Finn, Poe, and Kylo Ren for the sequels.

We found this “Star Wars” pin set and the one below at Pin Traders in Disney Springs.

This set has one pin for each film in the prequel trilogy: “The Phantom Menace,” “Attack of the Clones,” and “Revenge of the Sith.”

The pins have the movie titles, episode numbers, and release years on them.

In Days of Christmas at Disney Springs, we found some Walt’s Holiday Lodge merchandise that didn’t make it to Walt Disney World in time for the holidays.

This one has Mickey hanging with a snowman.

Goofy has had a skiing mishap on this plate.

And Donald throws snowballs with Chip and Dale on this plate.

It says “Christmas is Happier Together” around the image.

There was also a set of a cookie plate and milk jug for Santa.

The design on the two items feature treats inspired by Mickey and his friends.

This green shirt has arrived in time for St. Patrick’s Day next month.

It features Kermit in front of a rainbow and says “going green.”

This was in DisneyStyle at Disney Springs.

In Disney’s Hollywood Studios, we found this mug at Keystone Clothiers.

It is green with a brown base and features Grogu, a.k.a. Baby Yoda. One side says “Just keep sippin.'”

The other side says “Stronger than you think!”

This mug was in Tatooine Traders at Disney’s Hollywood Studios.

It features the famous scene where R2-D2 projects a hologram of Princess Leia.

The sticker on the side says “magically reveal hidden art with hot liquids!”

We could see faint outlines of the hidden art, which seems to be of several “Star Wars” characters.

The “Star Wars” and Rebel Alliance logos are on the other side of the mug.

This art set comes in a bag that says “Dreaming of sunshine” with images of Minnie, a hill, and a Mickey sun.

The bag zips open and lays flat to showcase the art supplies. It also has a handle on top.

This art set and the candle below were in Creations Shop at EPCOT.

The holder for this candle resembles a castle tower, with a golden lid.

It has stonework, archways, and columns.

It has a flowery “castle garden” scent.

This two-pin set was in Pin Traders at EPCOT.

One pin is the Rescue Rangers logo, while the other is Zipper.

Which item from today’s roundup was your favorite? Let us know in the comments.

Previous
‘Spider-Man: No Way Home’ Behind the Scenes Content Previewed Ahead of Digital & Blu-Ray Release