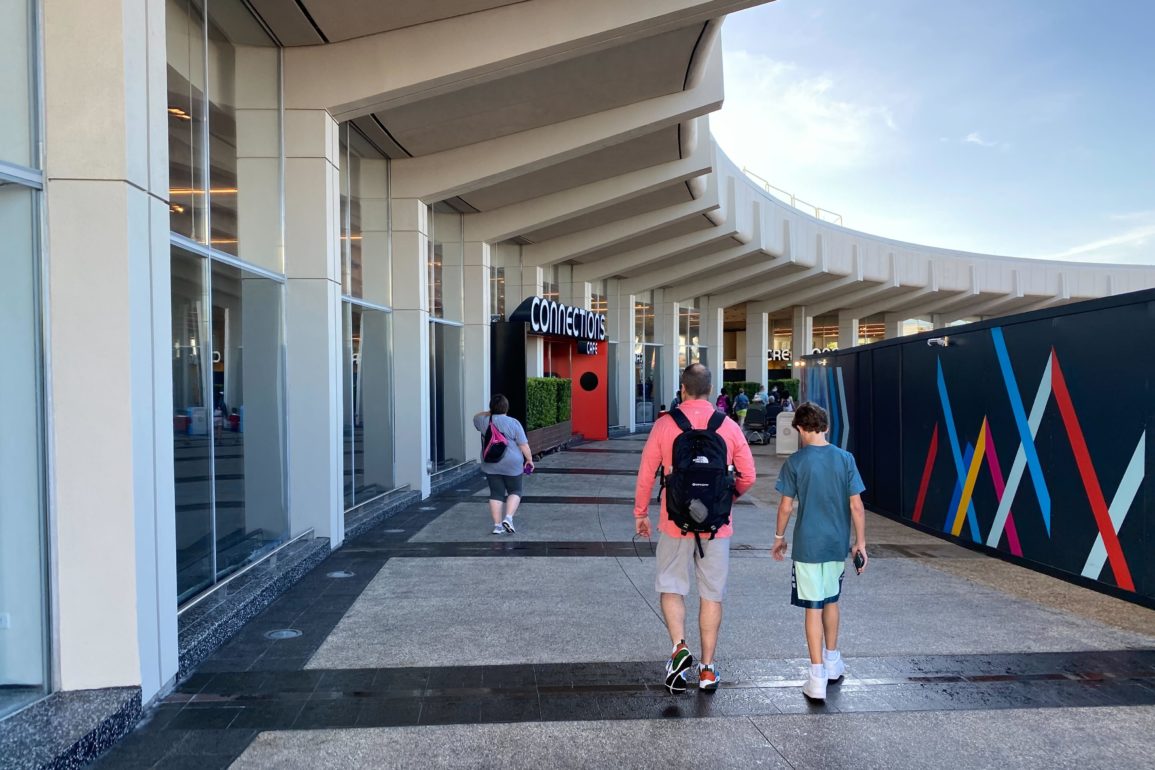 One of the walkways past Spaceship Earth at EPCOT has reopened after years of being blocked off due to construction.

We saw guests on the east walkway when we rode the Monorail this morning.

This walkway is to the left after passing under Spaceship Earth.

The reopened path is lined with green scrim.

The walkway to Guest Relations is blocked by planters.

The pavement has been replaced since guests last walked on it.

Guests walk past the scaffolding and scrim tower next to Guest Relations.

A map was mounted on one of the construction walls outside Guest Relations.

We can see into areas of Connections Café and Eatery that were previously out of view.

An entrance archway is over these doors.

The roof overhang and columns were repainted in the past few months.

Neon lights are visible inside.

The west exit from Project Tomorrow has reopened.

The sign for Innoventions has been removed from the exit.

The Innoventions sign remains, covered up, at the other Project Tomorrow exit, which has remained open.

Like the other construction walls in the park, the walls around the reopened walkway direct guests to different attractions and the park exit.

The lefthand walls end as we reach another Connections Café and Eatery entrance.

The windows are partially blocked from the inside.

We noticed a few days ago that some of the construction walls point to Guardians of the Galaxy: Cosmic Rewind.

The name of the new attraction is covered up until it opens.

We got a good look at this new Connections Café archway and sign.

Planters block the doors beneath the sign. Connections Café will be this park’s Starbucks location.

The archways are black on the outside and red on the inside.

The letters are white with a grey outline.

There are some holes visible between the letters.

Planters and construction walls still block half of the breezeway between Connections and Creations Shop.

There are lights on the ground surrounding Connections.

An opening date has not been announced for Connections Café and Eatery, but it does look close to completion. It’s possible it will open on Memorial Day weekend, at the same time as Guardians of the Galaxy: Cosmic Rewind.