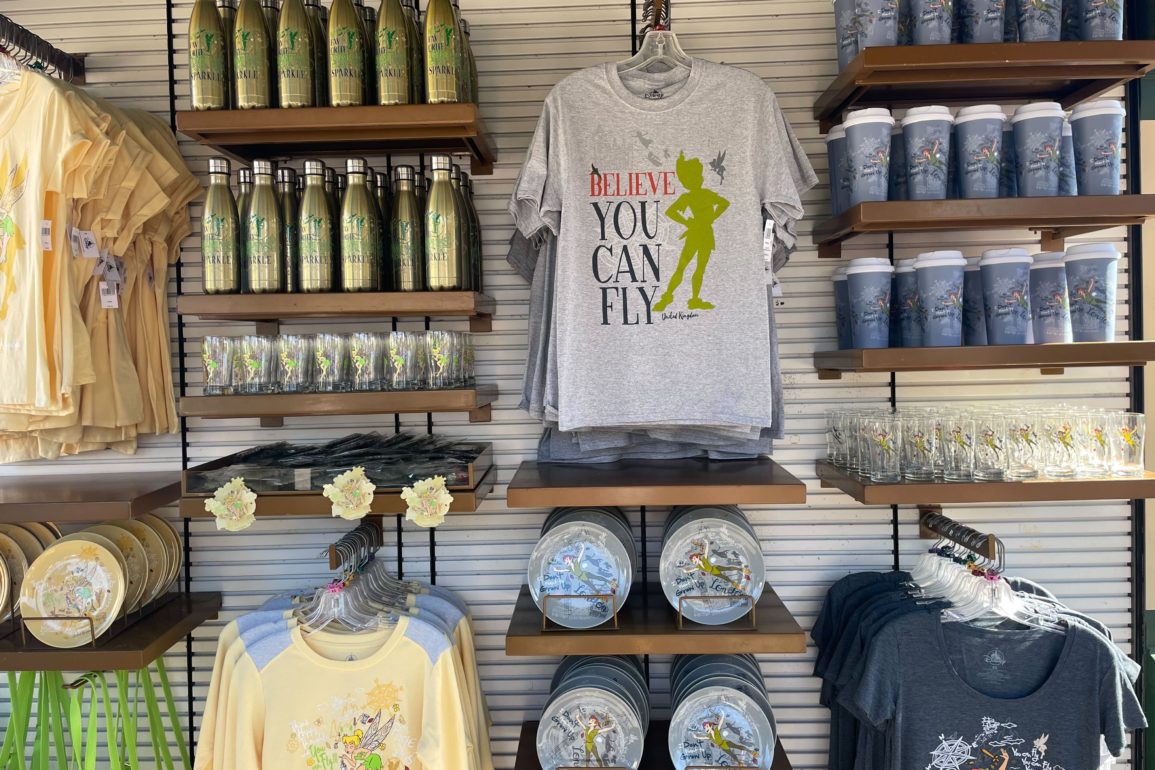 The 2022 EPCOT International Flower & Garden Festival has begun and with it comes tons of topiaries, new food offerings and, of course, merchandise. Check out this whole collection of Peter Pan merchandise that we found at the Festival Market Booth just outside of the Canada Pavilion.

This cap is a couple different shades of gray, with Peter Pan, embroidered on the front, flying over London.

Peter Pan is flying through a gray London sky that also has a pattern of words that say, “You can fly,” “I don’t want to grow up,” and “London.”

On the inside of the cap, it says “Believe you can fly” in red and blue lettering on the visor. There are also outlines of Peter Pan in green and Tinker Bell in gray.

The hat is adjustable with a velcro strap in the back.

There is this white Tinker Bell cropped tee.

On the front, there is a pattern that features Tinker Bell in the center, surrounded by phrases like “Think happy thoughts” and “You can fly!”

This Peter Pan t-shirt is gray with “Believe You Can Fly” in large red and blue lettering on the front.

Next to the lettering are outlines of Peter Pan and Tinker Bell. It says “United Kingdom” in cursive lettering under Peter.

On the front, it says “My favorite color is sparkle” in large neon green, black, and white lettering. An outline of Tink is next to the lettering, with a sparkling line of pixie dust.

This Peter Pan blouse is a darker hue of gray.

On the front, Peter Pan is flying over a London sky. He is surrounded by some of his classic phrases and icons of United Kingdom.

This raglan t-shirt is white with gray sleeves and a gray collar.

It has the same Peter Pan pattern on the front as the blouse.

This yellow blouse features a large image of Tink blowing pixie dust onto outlines of Peter, Wendy, John, and Michael. “Tink” is in large golden lettering with “United Kingdom” at the bottom in white lettering.

This crewneck is also yellow with the same Tinker Bell pattern on the front as the white cropped tee.

The shoulders have gray patches.

This matching Tinker Bell purse is adorable. It is beige with green lining. It has an image of Tink blowing pixie dust, surrounded by “Think happy thoughts,” “You can fly!!!,” flowers, leaves, and butterflies.

It zips at the top and has a long green strap.

This yellow magnet is an outline of the same Tinker Bell design featured on some of the blouses.

This blue magnet is also an outline of the Peter Pan design on some of the t-shirts.

This yellow plate has the Tinker Bell design.

And this gray plate has the Peter Pan design.

This gray water bottle sparkles in the sun, as if adorned with pixie dust.

The design on the front says “My favorite color is sparkle” in green, which matches one of the blouses.

It says “United Kingdom” on the other side in gray lettering.

There is also a clear Tinker Bell glass.

It also says “United Kingdom” on the other side in red lettering.

There is also a travel tumbler featuring the Peter Pan design.

It is a light blue color with an off-white lid.

Which of these items will you be picking up? Let us know in the comments!