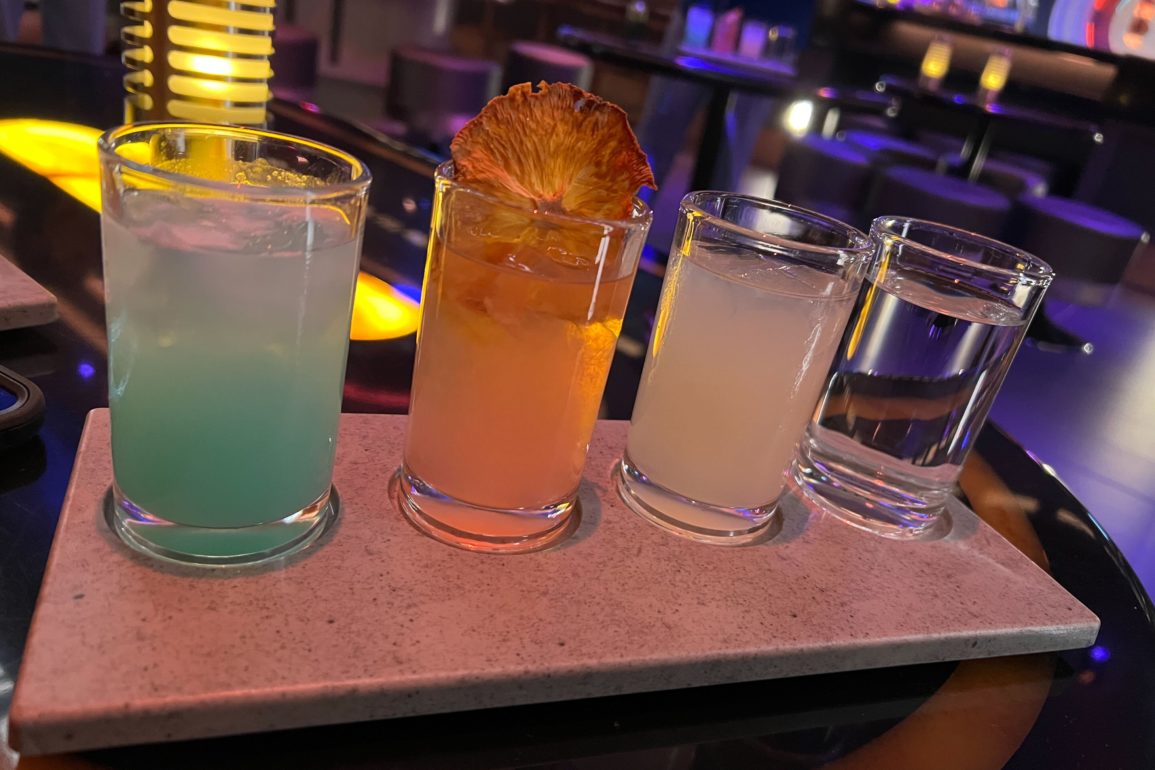 Star Wars: Galactic Starcruiser passengers can participate in a drink tasting called Cantina Chronicles on the second day of their voyage. Hosted in the Sublight Lounge on Deck 6, the Halcyon bartender will spin tales of cosmic origins and give detailed backstories for the drinks and their ingredients. This review will contain spoilers, but they are not plot-related.

Cantina Chronicles takes place at 12:30 p.m. on the second day (though schedules are subject to change; be sure to check your itinerary). It may overlap with your Batuu excursion.

All drinks served for the Cantina Chronicles are non-alcoholic.

During our first cruise, the actual bar was full thirty minutes ahead of the activity’s start time, but guests could still participate at tables.

On our second cruise, they changed the setup to better accommodate guests at tables.

Our drinks were presented in tall glasses on our first cruise.

They were in smaller glasses filled closer to the brim on our second cruise. The fourth glass is water.

Most people thought this was bad, but some liked it a bit. It has a sour limeade base. We found the yuzu taste to be a bit odd for our palates. For those unfamiliar, yuzu tastes something like a combination between grapefruit and mandarin orange with a difficult to describe herb quality. The “antidote” was green food coloring dropped into the drink.

Like the Jogan, Muja is a fruit that prospers on many planets throughout the galaxy. It is used for juice and in baking. Here it is used in a truth-telling beverage. The legend goes that if you’re lying, the drink will be sickly sweet and keep you from speaking. If you’re telling the truth, it will be bittersweet.

This was terrible; nobody in our group liked it. It was like a watermelon lemonade but with some bad flavoring — possibly the herbal garden blend.

Blue milk, a.k.a. Bantha milk, is a staple of Outer Rim dairy products. This citrus fizz version was created by a Chandrila Star Line researcher who encountered a tribe of Tuskens on Tatooine.

This was basically just lemonade. It was the only one of the three that we liked and was actually drinkable.

Overall, the drinks weren’t great, but this is included in your stay, and the storytelling and environment are neat. There’s also nothing else happening on the ship at this time, so if you’re back from Batuu with nothing to do, this is a fun, family-friendly activity.

You can watch the Cantina Chronicles with more information about each drink below.

Unavailable EPCOT Park Passes May Indicate Annual Passholder Preview Days for Guardians of the Galax...April 7, 2022
Burgers, Pizza, Milkshakes, and Waffles! FIRST LOOK at Connections Café and Eatery Menu for EPCOTMarch 30, 2022
Small Trees Planted Outside Pirates of the Caribbean in DisneylandMay 2, 2022