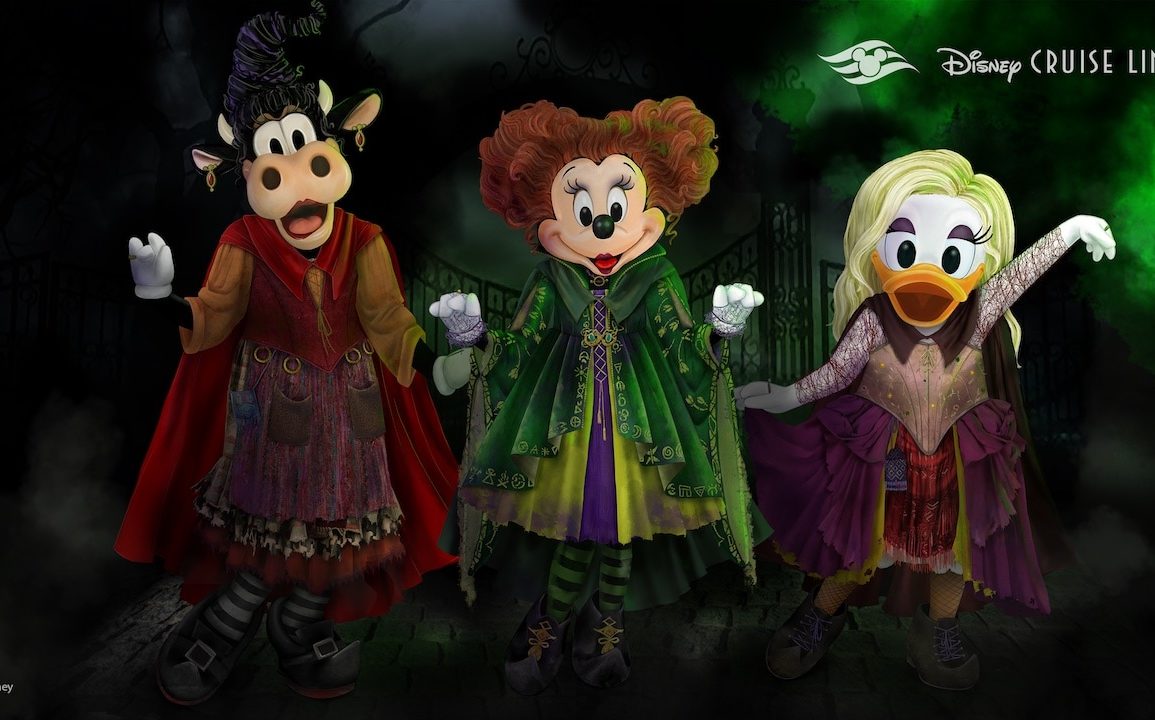 A special character meet and greet inspired by the Sanderson sisters and other new experiences will debut on Disney Cruise Line’s Halloween on the High Seas sailings this year.

Halloween on the High Seas will debut an all-new character meet and greet exclusively for Disney Cruise Line guests. While all characters on the ships will adorn Halloween costumes, Minnie Mouse, Daisy Duck, and Clarabelle Cow will debut a never-before-seen look as they dress up as the iconic Sanderson sisters from “Hocus Pocus.”

During its inaugural season of Halloween cruises this fall, the Disney Wish will introduce a unique twist on a Halloween on the High Seas hallmark.

The centerpiece of every ship during Halloween sailings is the signature magical Pumpkin Tree towering over the atrium lobby, each with Jack-O-Lanterns and flickering lights. Aboard the Disney Wish, guests will witness the debut of an all-new tree in the “Cinderella”-inspired Grand Hall.

This tree, named Boo, features lighter bark, graceful branches, and a mystical face. The legend behind it states it grew beautiful gourds with the help of a wishing star. The best pumpkin of them all was destined to grant a very special wish and that moment came when a carriage was needed to send a fair maiden to a royal soiree — that perfect pumpkin became the coach that carried Cinderella to the ball.

Other frighteningly fun experiences aboard Halloween on the High Seas sailings include Mickey’s Mouse-querade Party, a fun-filled costume party for families and Disney characters; villainous takeovers in the adult-exclusive venues; Halloween-themed movies on Funnel Vision; and even a ghostly take on ship announcements.

Halloween on the High Seas voyages will be offered aboard select sailings in September and October. Departing from ports in Miami and Port Canaveral, Florida, San Diego, and New York City, each cruise will take families to fascinating destinations including the Bahamas, Caribbean, Bermuda, Canada, and Mexico. All sailings from Port Canaveral and Miami will include a stop at Castaway Cay, Disney’s private island.