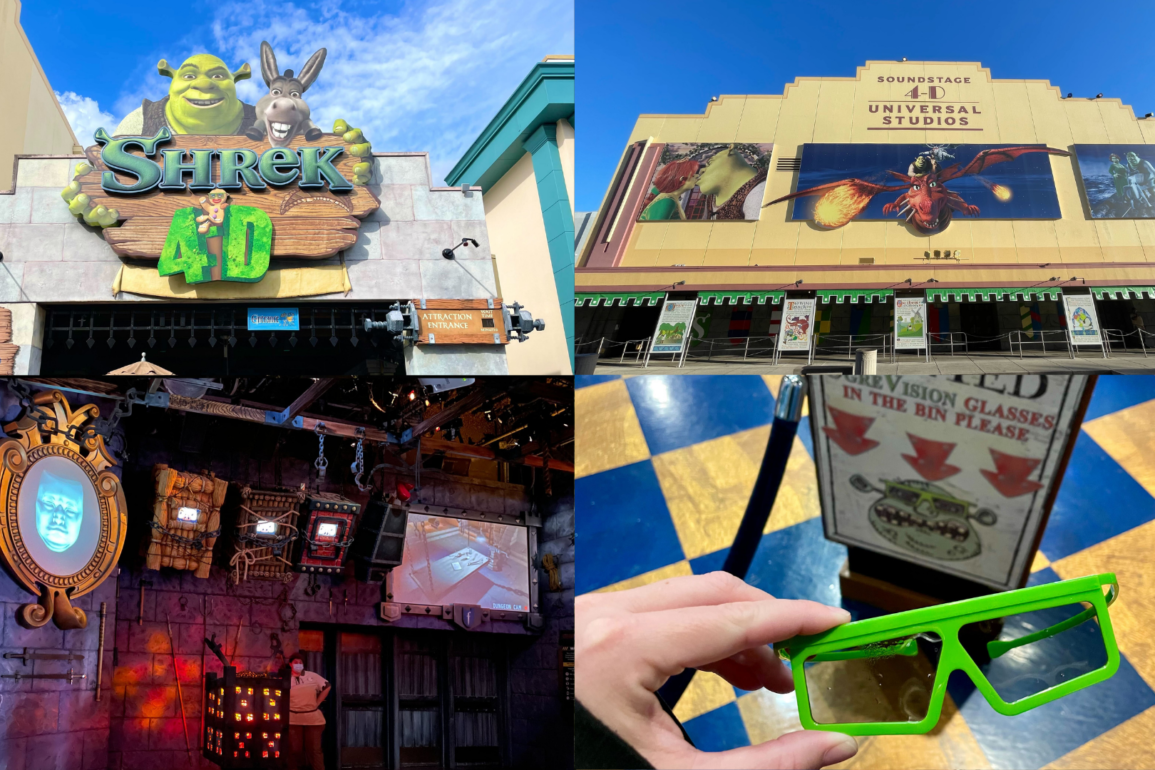 It’s All Ogre Now: A Look Back at the Retired Shrek 4-D Attraction at Universal Studios Florida

After a nearly 20 year run, Shrek 4-D was permanently closed at Universal Studios Florida on January 10, 2022. Since the closure, all the signage has been removed from the exterior, construction walls have gone up hinting at a possible Minions-themed attraction, and props have been sold off at the Williams of Hollywood Prop Shop. It’s all ogre now, but we wanted to take a look back at all the details of this classic attraction. Let’s take a trip down memory lane and check out how the attraction looked in its prime.

Shrek 4-D was one of the very first attractions that guests would encounter when entering Universal Studios Florida. Shrek, Donkey, and Gingy could be seen on the giant Shrek 4-D sign, which resembled an outhouse door. A small banner below informed guests that the attraction would be “presented in Ogre Vision.”

Gingy with a candy cane could be seen on the Universal Express entrance sign.

An iron gate over the entrance had small Fs for Farquaad.

Soundstage 4-D also had large posters with scenes from the attraction.

Three scenes were displayed on the building, including a kiss between Shrek and Fiona.

From the outside of the queue line, several boards told the story of Shrek.

Because the film for Shrek 4-D takes place after the first film, these storybook pages gave guests a little background in case they weren’t familiar with the story.

Even the stroller parking signs were themed. Don’t forget you parked in Lancelot 17!

The attraction would have guests exit out into Shrek’s Ye Olde Souvenir Shoppe, located on the other side of the building.

Donkey, Gingy, and the 3 little pigs helped point guests in the direction of Shrek-themed souvenirs.

The Duloc Community Bulletin Board and an advertisement for “Great Moments with Mr. Farquaad” were located on the side of the building.

Shields and wanted posters were also on the walls along the side of the building.

The entrances for the gift shop were located right across from the Shrek and Donkey meet and greet area.

Let’s take a look through the queue.

Green “S” banners and more shields could be found throughout the queue. Wooden signs for “humans” and “fairy tale creatures” were also hanging over the entrance.

There were several screens throughout the queue with a short pre-show for guests to watch while they waited in line.

Hath a dragon parched thy palate? Fetch a pail of water. It doth slay a dragon’s thirst!

You could also find The Medieval Times on pillars in the queue.

The extended queue was often used on busy days.

Who doesn’t love a good, themed trash can, right?

There was also a large green shield with the Shrek “S” in the queue.

Another look at The Medieval Times.

One of our favorite details from the queue was the handprints in cement for a few of the characters.

A closer look at the Duloc Community Board reveals some very funny themed notes.

There were some amazing posters displayed just before you entered the pre-show for the attraction. “Dulocland” always sounded like a good time.

As you entered the dungeon to prepare for your torture, you would grab a pair of green Ogre Vision glasses.

A Team Member would spiel along with the pre-show. The three little pigs, Pinocchio, and Magic Mirror could be seen hanging at the front of the dungeon.

Gingy was visible on dungeon cam, and later the ghost of Lord Farquaad would make an appearance.

Shackles, stocks, axes, and other torture devices could be seen on every wall and even on the ceiling.

Duloc Express was always worth it.

It’s the little details that made the experience.

We’re going to miss the floggings.

After the pre-show, guests would move into the theater for the film.

There was some stationary seating, but almost all the seats moved to give guests the full 4-D experience.

At the end of the film, a fairy is flung across the room and crashes into a speaker over the exit.

Guests would drop their Ogre Vision glasses into the bins as they exited the attraction into Shrek’s Ye Olde Gift Shoppe.

The interior of Ye Old Gift Shoppe is extremely themed.

There are so many little details here that are often overlooked; we had to make sure to take time to document the entire store from floor to ceiling, too.

When we say floor to ceiling, we mean it.

Every detail fit perfectly with the theme.

Characters could be found along the top of the merchandise displays. There was even a model where the planets revolved around the Earth.

You’ll notice the Magic Mirror is hanging behind the Guest Cheque Out for the Honeymoon Hotel.

Like any good hotel, there were maps to local attractions.

Pennants could be seen over the exit. They were very clever.

There are a lot of themed signs on the walls and doors.

Child Swap was located in the gift shop by the exit.

You can check out our full queue tour and preshow video above, as well as a final farewell to Shrek’s Ye Olde Souvenir Shoppe below.

And they lived happily ever after. Shrek 4-D may be gone, but it will never be forgotten. We hope you enjoyed this final farewell to Shrek 4-D. Make sure you follow Universal Parks News Today for all the latest updates from Universal parks around the globe and leave us a comment and let us know if you’ll miss Shrek 4-D or if you’re looking forward to a brand new attraction taking over this location.