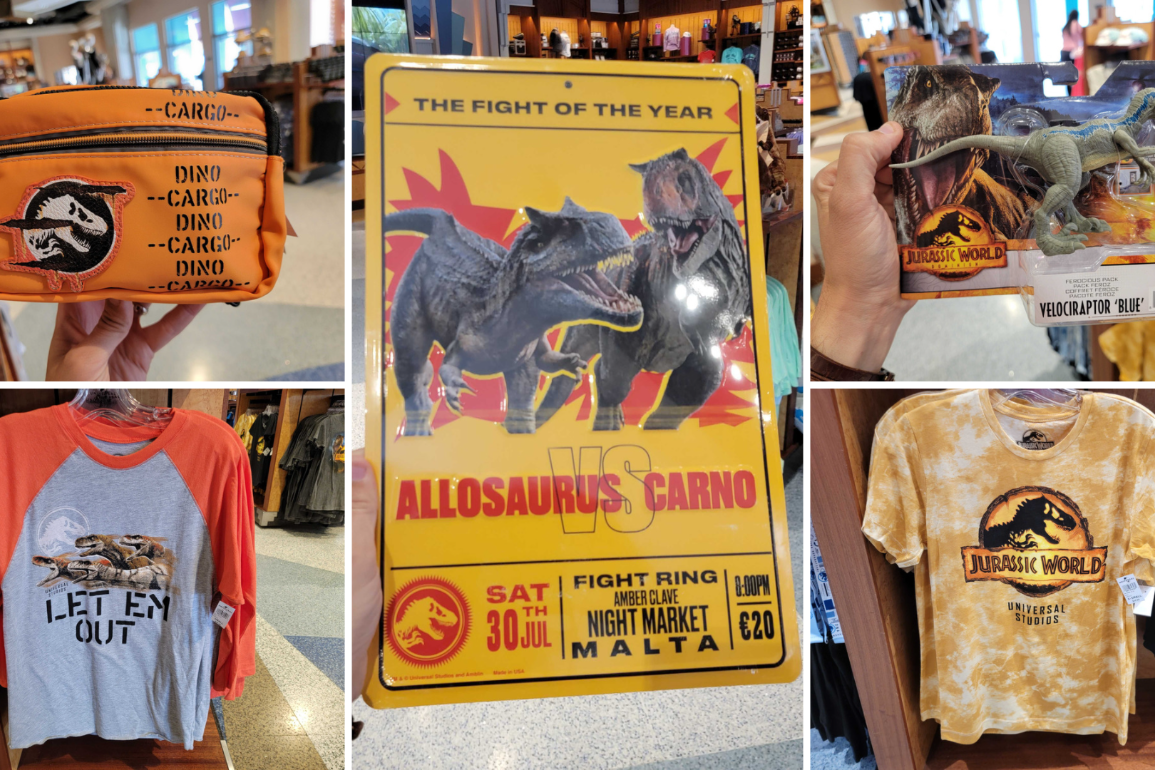 A herd of new “Jurassic World Dominion” merchandise has arrived at Universal Studios Hollywood ahead of the movie’s summer release. These items were in the Upper Lot Studio Store.

This tee is also black with the orange logo and “Universal Studios” beneath it.

This shirt is yellow and white tie-dye, with an orange version of the Jurassic World logo on the front. “Universal Studios” is printed in black below the logo.

This toy set includes a truck and a Velociraptor.

The truck has a claw at the front for capturing dinos.

The Dsungaripterus is a yellow and black feathery pterosaur.

It’s back opens up to show DNA.

The Migaraia is a stegosaurid dinosaur, with large tusks sticking out of its back.

Of course, we all know Blue, one of the Velociraptors introduced in the first “Jurassic World” film.

The Moros intrepidus is related to the T. rex. This one is green and orange.

The packaging for this toy resembles a truck.

It includes a special edition blue and green Allosaurus toy.

This toy has the same packaging, with a special edition red Carnotaurus inside.

This set includes figures of Owen, the Velociraptor Blue, and a fox.

This tee features a T. rex running from a helicopter. The orange logo on the front says “Jurassic World Dominion.”

This badge is grey with an orange stripe on the bottom. The “Jurassic World” logo is at the center, and “Universal Studios” is on the stripe.

On the other side is a transparent slot for an ID.

The clip features the “Jurassic World” logo in orange.

This sweatshirt is black with the T. rex “Jurassic World” logo on the front.

A poster image on the back features a T. rex roaring.

This black tee has two dinosaur footprints in rock on the front. The orange Jurassic World logo sits between the prints.

This zip-up hoodie is black. The “Jurassic World” logo is on the left breast.

It also features a T. rex on the back roaring in a forest.

Biosyn Genetics is a company featured in the original “Jurassic Park” novels. It will finally debut on screen in “Jurassic World Dominion.” This set includes a bumper strip and circular auto decal.

The bumper sticker is blue and reads, “The future of genetic power is you.” The circle decal has the T. rex logo made out of green pixels.

The lanyard is white with the Biosyn and Universal Studios logos.

This set includes two magnets. One is black and features the Biosyn logo made out of green-blue pixels.

The second magnet is a chart of dinosaur sizes, with the Biosyn logo in the corner.

The badge reel is white with the Biosyn logo on a blue circle.

A pixelated “Jurassic World” logo is on the other side.

This magnet clip is silver with a blue center featuring the Biosyn logo.

This youth tee is grey with black edges. Three photos of dinos are on the front, with a sticker that says “live dinosaur” and “handle with care.”

This sign resembles a yellow poster advertising “the fight of the year.” It features an Allosaurus and Carnotaurus going head to head, scheduled for Saturday, July 30th.

This tee is heather grey, with red sleeves. It reads “Let ’em out” in black letters beneath an image of running dinosaurs.

This bag can be converted from a crossbody to a belt bag. It’s orange, with “dino cargo” stamped several times across the front. It features a faux rusted T. rex logo as a patch.

The strap is black.

The “Jurassic World” logo and “Universal Studios” are in silver on the back.

There are multiple zip pockets. The interior lining is black with the T. rex logo and “live dinosaur” in orange.

This tee is white with a black neckline and sleeve edges. A “Dinosaur Fight Ring” logo is on the left breast.

One sleeve has a logo for “Amber Clave Night Market.”

The back has the poster design for the Allosaurus vs. Carno fight.

This cardholder also features the Allosaurus vs. Carno poster on one side. The other side is solid black, with red stitching and the “Jurassic World” logo. Three claw marks tear through the logo, with orange streaks resembling rust.

This grey tank top has the faux rusted T. rex logo on the front and center.