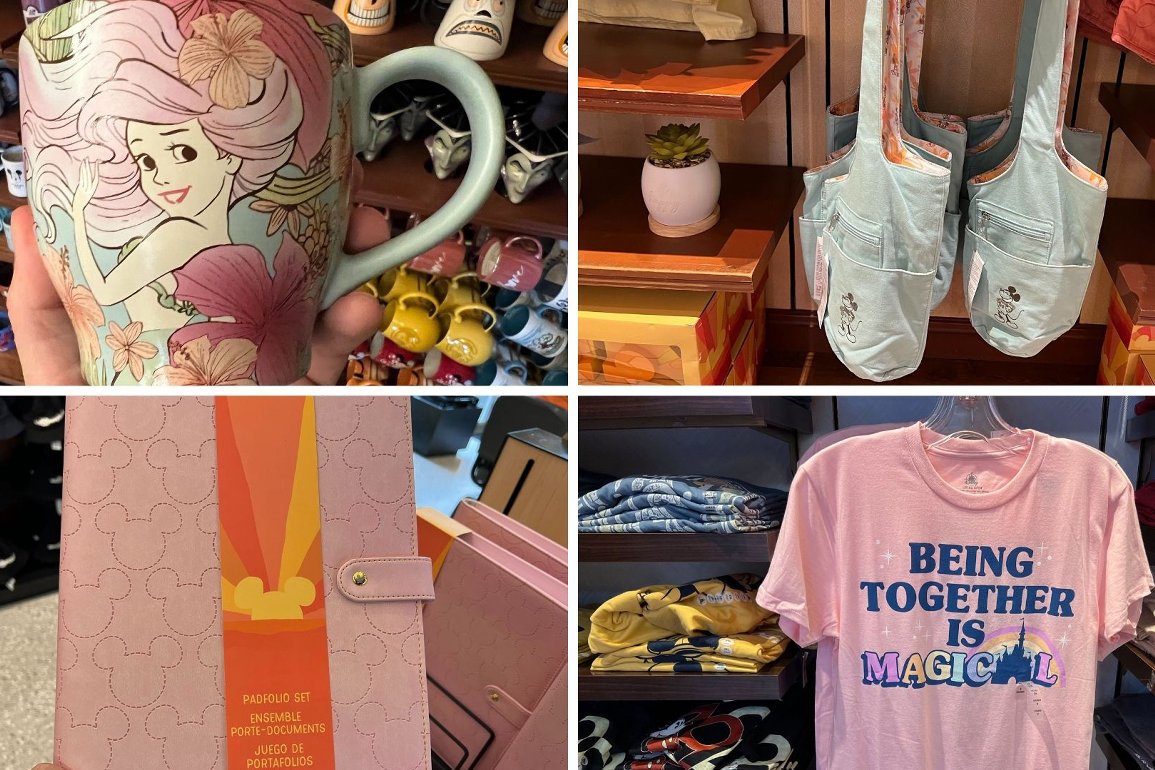 Welcome to the merchandise roundup for April 4, 2022! Each new day brings new merchandise to Walt Disney World, and we know you don’t want to miss a thing, so we gather new releases here. Today we visited Disney’s Polynesian Village Resort, Disney Springs, Magic Kingdom, and EPCOT; let’s look at our discoveries.

We found a couple of new t-shirts at BouTiki at Disney’s Polynesian Village Resort.

An sketch image of Horace with an embroidery of his name is on the left breast.

On the back of the shirt, there are more sketch images of Horace in varying positions.

The t-shirt is an “Incredibles” t-shirt featuring Mr. Incredible.

The shirt is red with “Dad Bod” in capital letters above Mr. Incredible.

This shirt would be perfect for an early Father’s Day gift.

Over at Disney Springs, we found these new sweat shirts in World of Disney.

The shorts are a dark gray color and made of a sweat pant material.

The design of these shorts are similar to the Horace t-shirt above.

The shorts feature a sketch image of Mickey with an embroidery of “Mickey Mouse” above him.

The shorts also have pockets and can be tied with a drawstring.

Over at the Emporium in Magic Kingdom, we found a couple of new princess mugs.

This one is “The Little Mermaid” themed featuring Ariel swimming among flowers in the ocean.

It says “Dreaming of another world” on the inside of the mug.

There is also a similar “Sleeping Beauty” mug featuring Aurora appropriately among a background of roses.

It says “Sweet as a Rose” on the inside of the mug.

We also found this shoulder bag in the Emporium. We first spotted it over at Disneyland.

The bag is a pastel blue color. An embroidery of a smiling Mickey Mouse is on the front pocket. There is also an additional zipper pocket above it.

The bag has a long blue strap.

The lining on the inside is the same Minnie Mouse floral pattern we’ve seen on the Minnie Mouse pad and stationery recently released.

Over at Mickey’s of Hollywood in Disney’s Hollywood Studios, we found a couple more new t-shirts.

This shirt is a blue/gray color featuring Mickey Mouse. Underneath him it says “To the castle and back” with a small red silhouette of Cinderella Castle.

This shirt is light pink and says “Being together is magical” with the “A” in magical replaced with a silhouette of Cinderella Castle. A rainbow is also in the background.

This t-shirt is white with Minnie Mouse in the center. Underneath her it says “I love you” with a red silhouette of Cinderella Castle.

And this light blue t-shirt features a sketch of Roxanne from “A Goofy Movie.”

We found these t-shirts in Mickey’s of Hollywood at Disney’s Hollywood Studios.

And over at EPCOT, we found this new padfolio set.

This padfolio is light pink with a pattern of Mickey Mouse heads all across it.

It has a button enclosure.

On the inside is a memo pad, three golden pens, and pockets with Mickey Mouse and “Be Happy” on them.

We found this in Creations Shop.

Will you be picking up any of these new items? Let us know in the comments below!