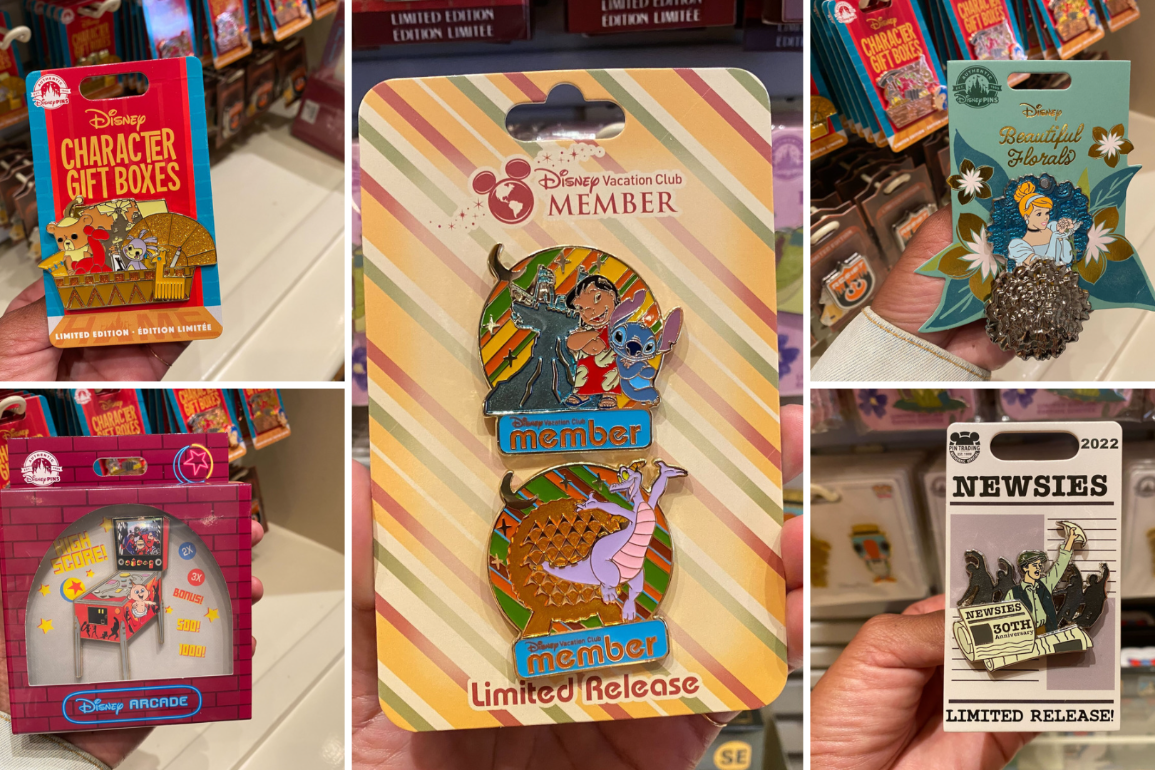 Several new pins arrived at Disneyland Resort this week, including another limited release Disney Vacation Club pin set, as well as a 30th anniversary “Newsies” pin, the next “Beautiful Florals” pin, and a jumbo “The Incredibles” arcade pin.

This set includes two pins, inspired by Walt Disney World rather than Disneyland. One features Mount Mayday at Disney’s Typhoon Lagoon water park and the other features Spaceship Earth at EPCOT.

This pin celebrates the 30th anniversary of cult classic “Newsies.”

The backing card resembles a newspaper, with “Newsies” along the top and “Limited release!” along the bottom.

The pin features one newsboy holding up a paper, with the silhouettes of others in the background. In front of him are two rolled-up papers, one reading “Newsies 30th Anniversary” on the front.

This Character Gift Boxes pin is clearly for Kuzco from “The Emperor’s New Groove.”

The next princess in the “Beautiful Florals” series is Cinderella. The front of her pin is a silver carnation.

It twists aside to reveal Cinderella holding a pink carnation.

This jumbo pin is shaped like a classic pinball arcade machine.

The game features the Incredibles family, and baby Jack-Jack is phasing through the side of the machine.

The box has a red brick pattern with neon accents, like a retro arcade.

One of these boxes contains a randomly selected pin from the collection.

Each pin is shaped like a puzzle piece and features a different character from “The Emperor’s New Groove.” If you get all ten pins, they connect like a regular puzzle.

All of these were in 20th Century Music Co. Which pins are you adding to your collection? Let us know in the comments.