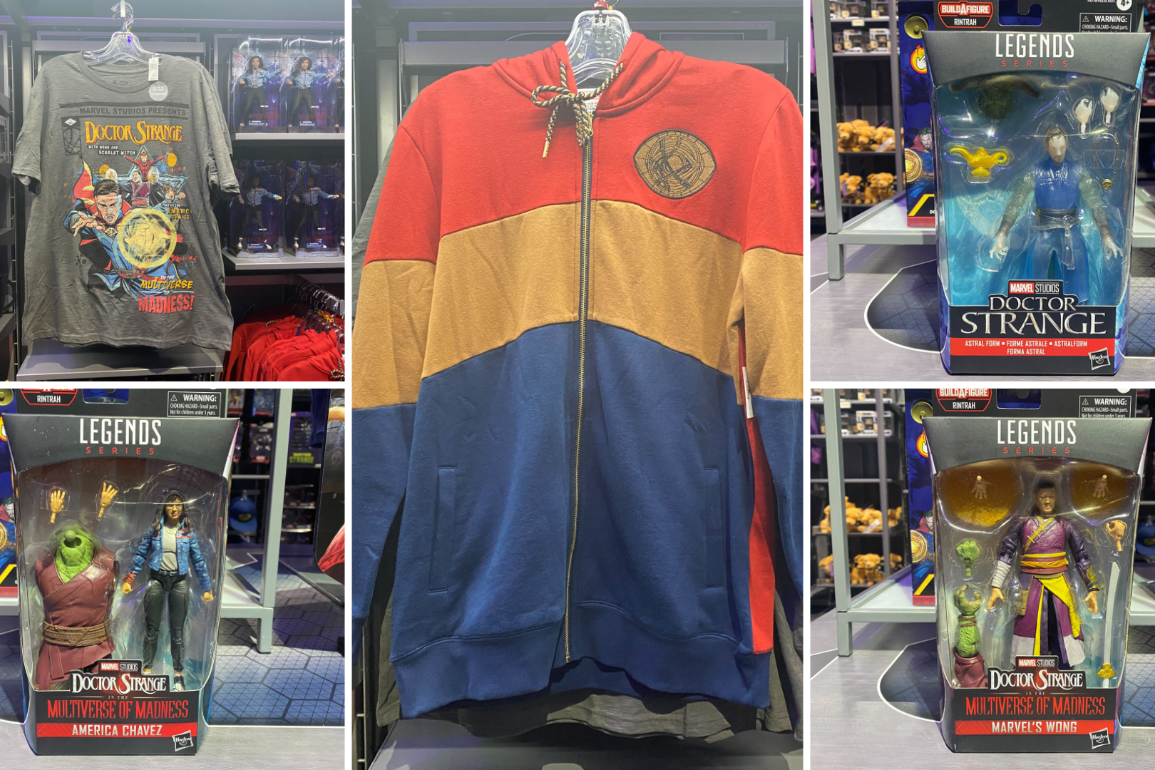 Ahead of the release of “Doctor Strange in the Multiverse of Madness,” new apparel and toy figurines have arrived at Disneyland Resort. We found all of these items in the Avengers Super Store at Disney California Adventure.

This tee is grey with a comic cover-inspired design featuring the characters of “Doctor Strange in the Multiverse of Madness.”

Strange is at the front, with Wong, Scarlet Witch, and America Chavez behind him.

This hoodie is red, yellow, and blue — the colors of Doctor Strange’s costume.

The seal of Vishanti is embroidered on the left breast.

It zips up and has a gold and blue drawstring on the hood.

There are two pockets.

The back is solid red instead of striped, to resemble Strange’s cape.

This figurine is classic Doctor Strange, with several different removable and posable hands.

The collection includes seven figurines, including two comics characters. Six of the seven also have pieces to assemble Rintrah, a green minotaur-like creature.

Master Mordo is in a green outfit and also includes several different hands.

He also has a crossbow and comes with Rintrah’s arm.

Wong has multiple hands and a sword.

His set includes Rintrah’s other arm.

Her set also includes a pair of extra hands.

This is Strange’s astral form.

Unlike the other figures, it is transparent and ghostly. It includes an extra pair of hands, the Eye of Agamotto, a lamp, and Rintrah’s head.

D’Spayre is a demonic villain from the Marvel Comics.

He comes with Rintrah’s leg.

D’Spayre has fought several Marvel superheroes in the comics, including Dr. Strange.

A version of D’Spayre appeared in the MCU’s “Cloak & Dagger” series.

Another comic character is Sleepwalker, who has occasionally appeared with Doctor Strange.

He comes with Rintrah’s other leg.

Sleepwalker has not made any MCU appearances.