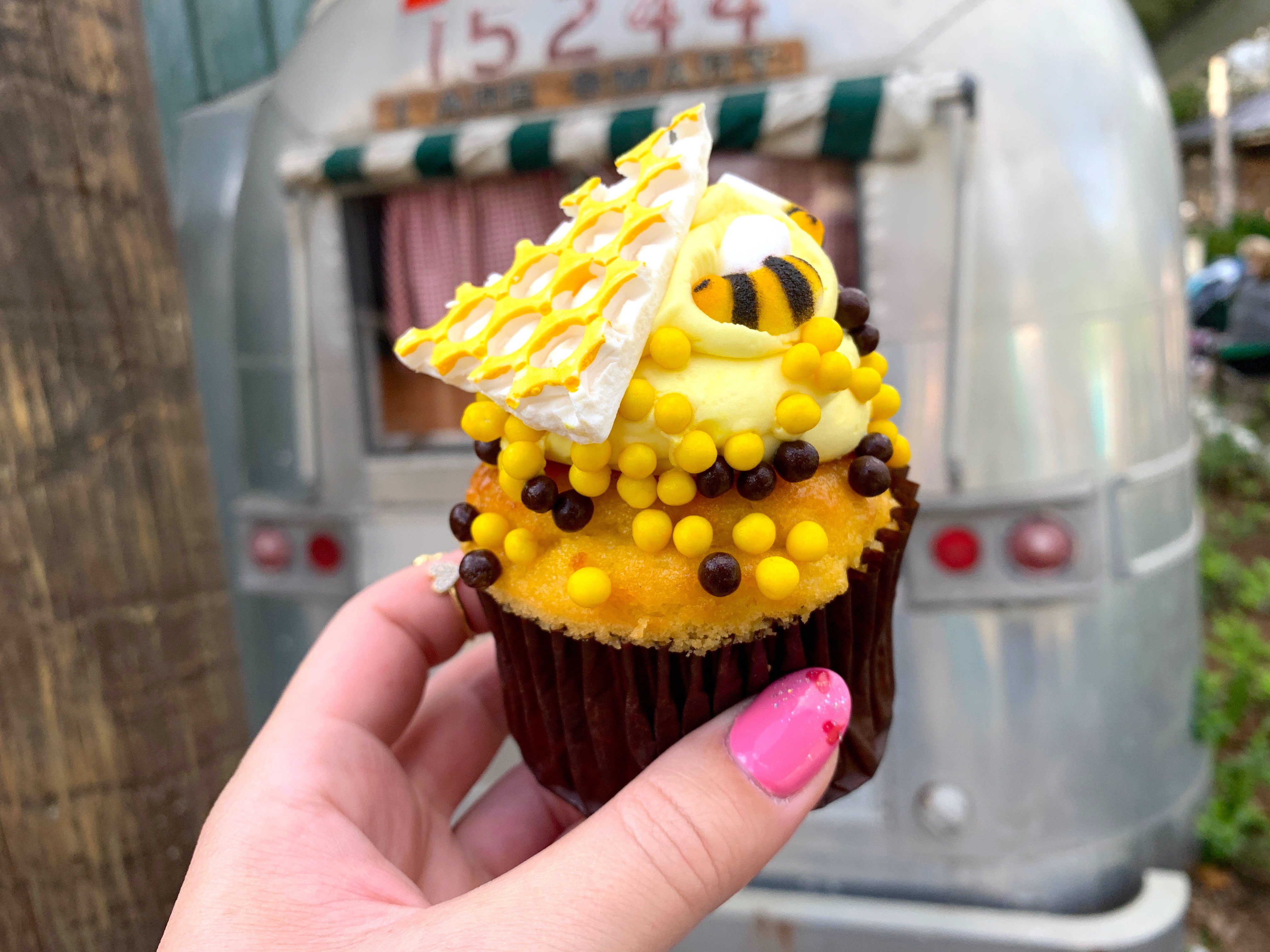 The buzz going around Disney’s Animal Kingdom is that the orange-honey bee cupcake is back! Well, we here at WDWNT are fond of bees (sort of), and it was delicious last year, so we had to fly over there right away.

This limited-time treat can “bee” found at Creature Comforts now through April 28. You can stop in or place a mobile order.

It’s a pretty cupcake (and would undoubtedly appeal to Winnie the Pooh).

The 3-D effect of the white chocolate honeycomb is pretty cool. This is definitely an Instagrammable cupcake.

In case you were wondering, the round things are crunchy chocolate pearls.

We know it looks nice, but how does it taste? Let’s find out!

Going in, we had mixed expectations. We’ve found that Disney’s Animal Kingdom cupcakes aren’t usually the best out of the Walt Disney World parks.

That being said, this cupcake was good. Not great, but good.

The cake itself had a muted orange taste, which wasn’t in-your-face. Texture-wise, it was moist, which is excellent for a cupcake.

We thought the filling was the best part. It’s an understated honey custard, which complimented the orange flavor of the cake. Both were subtle, which we enjoyed.

On the other hand, the frosting was just buttercream, and it was way too sweet. It’s the typical Walt Disney World sugar explosion you get with most of the cupcakes. There was just way too much sweetness to enjoy it. Our advice is to take the top off the cupcake and enjoy the cake and filling.

The white chocolate honeycomb was way too sweet, to the point that we couldn’t eat it after a bite or two. There’s no honey flavor, just pure confectioners sugar. The bees are just sugar cupcake decorations.

Overall, there’s great potential here. It was suitable for an Animal Kingdom cupcake, but the buttercream frosting on top was overwhelming. Kids are likely to enjoy this, seeing how sugary the top can be.

Tumble Monkeys and Aerial Dancing Birds Returning to 'The Festival of the Lion King' on July 16May 24, 2022
Instagram Influencer Sat On Guest’s Feet To Get Cavalcade View, Walt Disney Imagineering Files Permi...February 8, 2022
Golden 50 Decorations Moved From Entrance to Hub at Magic KingdomJune 23, 2022

Next
Expedition Everest Opens Early at Disney’s Animal Kingdom, Park Hours Extended in May and June, Take a POV Ride on the Germany Pavilion Model Train, and More: Daily Recap (4/15/22)