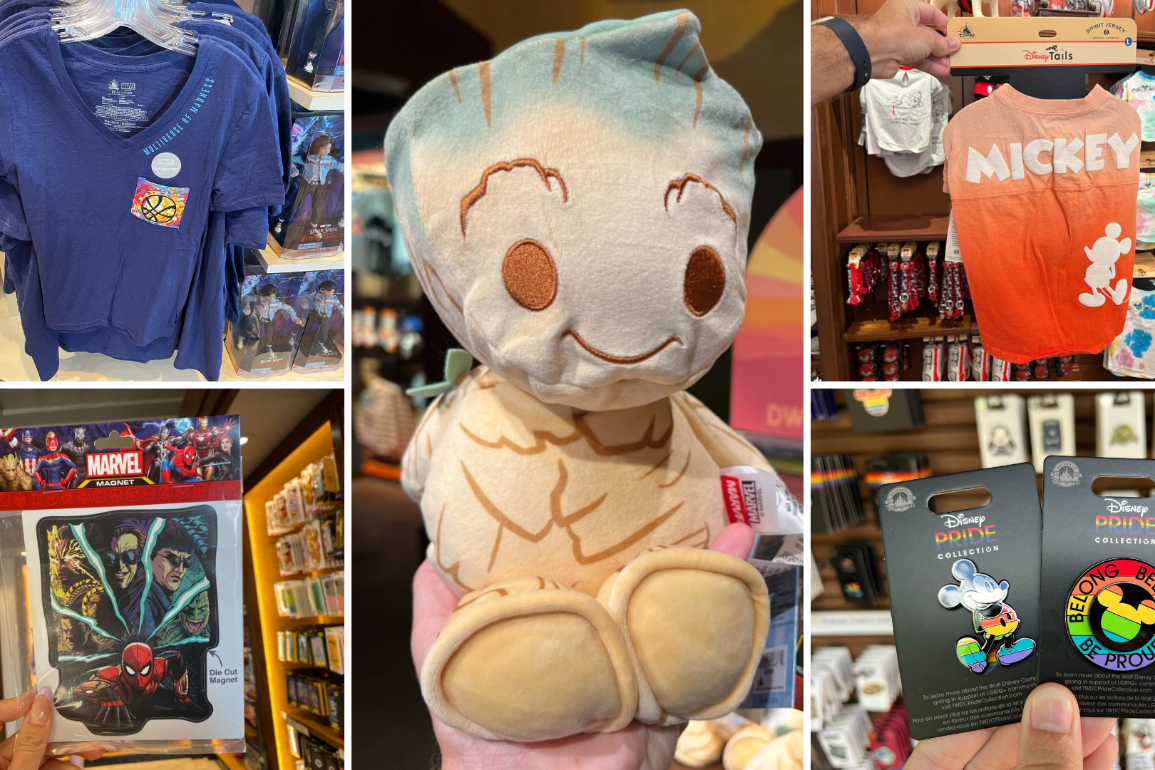 Welcome to the merchandise roundup for May 2, 2022! Each new day brings new merchandise to Walt Disney World, and we know you don’t want to miss a thing, so we gather new releases here. This week we visited Disney Springs, Disney’s Hollywood Studios, Magic Kingdom, Disney’s Grand Floridian Resort, Disney’s Animal Kingdom, and EPCOT; let’s look at our discoveries.

Marie holds a giant sequin-covered pink bow on this patch.

We found it in Pin Traders at Disney Springs.

In World of Disney, we found this PopGrip by PopSockets.

It is pink, sparkly, and Mickey-shaped.

Also in World of Disney were these Pizza Planet-branded shorts. They are black with a drawstring waist.

The Pizza Planet logo is embroidered in red on a side pocket.

The drawstring has white, red, and black stripes at the ends.

This V-neck tee is blue.

It features a colorful breast pocket with the seal of Vishanti on it.

“Multiverse of Madness” is printed along the neck in light blue lettering.

It glows in the dark.

The back features the main characters of “Doctor Strange in the Multiverse of Madness.”

Over at Super Hero Headquarters we found this youth tee inspired by Doctor Strange.

A portal resembling the seal of Vishanti is on the center.

The design glows in the dark.

This magnet features Spider-Man and the four villains that appeared in “Spider-Man: No Way Home.”

They are pictured in a comic book art style.

We found this in the Darkroom at Disney’s Hollywood Studios.

Over at Magic Kingdom, we found this other “Spider-Man: No Way Home” magnet in Tomorrowland Light & Power Co.

It features the three Spider-Men who appeared in the film.

In the Emporium at Magic Kingdom, we found this pet Spirit Jersey.

It is a pink-orange ombre.

“Mickey” is across the shoulders, while the mouse himself is pictured in the corner.

The 50th anniversary Cinderella Castle logo is on the side of the transparent logo.

The 50th anniversary logo is on the gold cap.

One reads “My happy place” over Cinderella Castle. The smallest one features a Mickey head and reads “# 100% in love.” Mickey’s silhouette is on another button with “#AlwaysTrending” over him. The final button is pink with Minnie in her blue polka dot skirt. It reads “Dots so awesome” and “#Always Trending.”

This set was in M. Mouse Mercantile at Disney’s Grand Floridian Resort.

We found a new weighted Groot plush over at Discovery Trading Company in Disney’s Animal Kingdom.

The weighted plush is Groot in his baby form, complete with felt leaves sticking out of his arms.

The plush is approximately 1.5 pounds.

This circular pin has a rainbow Mickey head in the center that spins.

The rainbow outer edge reads “Belong,” “Believe,” and “Be Proud.”

We found these at the pin kiosk near Tamu Tamu Refreshments at Disney’s Animal Kingdom.

In the Creations Shop at EPCOT, we found a new female empowerment outfit for Disney nuiMOs.

Also in Creations Shop was this blue and white tie-dye tee.

It reads “Happy” three times over an image of Mickey.