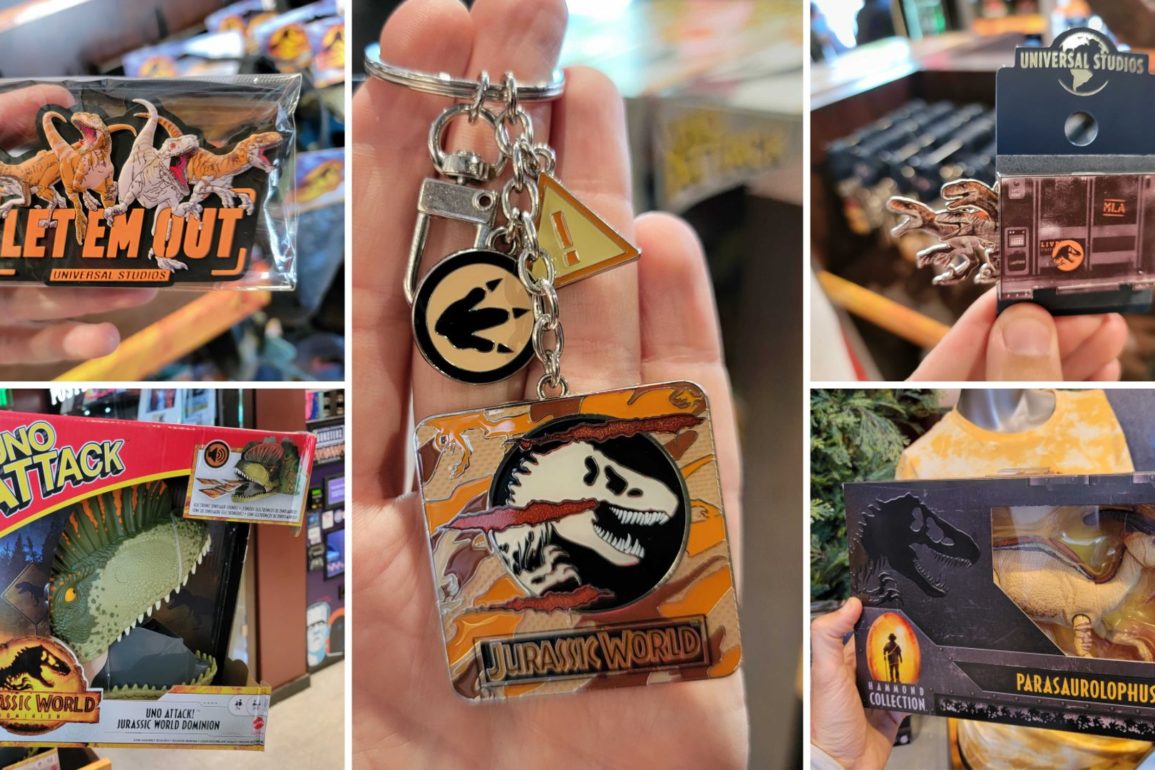 This Parasaurolophus toy is part of the Hammond Collection, named for the founder of the first Jurassic Park.

The Parasaurolophus was an herbivore who could walk on two legs or four legs. It has a distinct horn-like crest protruding from the back of its head.

The figure is a light tan color with dark brown and red accents.

The packaging features the logo for the Hammond Collection, with the silhouette of Dr. Hammond in an orange amber oval.

This version of the family card game includes a Dilophosaur head that makes sounds and spits out cards.

This photo frame magnet features “dino cargo” crates. Two small dinosaurs sit atop crates. “Universal Studios” is on the top of the frame.

This magnet just has an assortment of crates reading “dino cargo” and featuring the Jurassic World logo.

This magnet reads “Let em out” and “Universal Studios.” Four atrociraptors have their mouths agape behind the words.

This magnet features the “Jurassic World” amber logo and a poster below it. The poster features a T. rex roaring, with a helicopter behind it.

There are four pins in this set, each featuring a different “Jurassic World” raptor: Ghost, Panthera, Tiger, and Red. The atrociraptors will debut in “Jurassic World Dominion.”

This pin features a running dinosaur. Behind it are Jurassic World logos and “Beware.”

This pin resembles the classic T. rex logo, but made out of blue and green pixels with the logo for Biosyn Genetics at the bottom.

This pin resembles a shipping container with an electronic keypad.

An image of three atrociraptors slides out of the side.

This pin has two crates, one reading “Dino Cargo” and the other featuring the Jurassic World logo. Two dinosaurs stand atop the crates.

This pin has a T. rex roaring behind the Jurassic World logo.

This is the exact same design as the pin above, just on a keychain.

Like the “Let em out” magnet, this keychain features four atrociraptors.

The keychains have both a ring and a lobster claw clip.

The main charm of this keychain is a chart of dinosaur heights compared to human heights. There’s also a small charm of the Biosyn Genetics logo.

This keychain has three charms. The largest is a square featuring the Jurassic World logo against a camo orange background. There’s a small circular charm featuring a dinosaur footprint. Finally, there’s a charm of an exclamation point warning sign.

Like the other “dino cargo” merch, this has two crates, one featuring the Jurassic World logo. A second charm is a dinosaur’s brown silhouette.

We’ve seen this design on several merchandise items. It is a poster advertising an Allosaurus vs. Carnotaurus fight, with the dinos going head to head against a red and yellow background.

Some of this merchandise is also available at Universal Orlando Resort.

Will you be collecting any of these “Jurassic World” magnets, keychains, or pins? Let us know in the comments.

Next
Get Comfy With New Mickey, Minnie, & Simba Lounge Pants at Disneyland