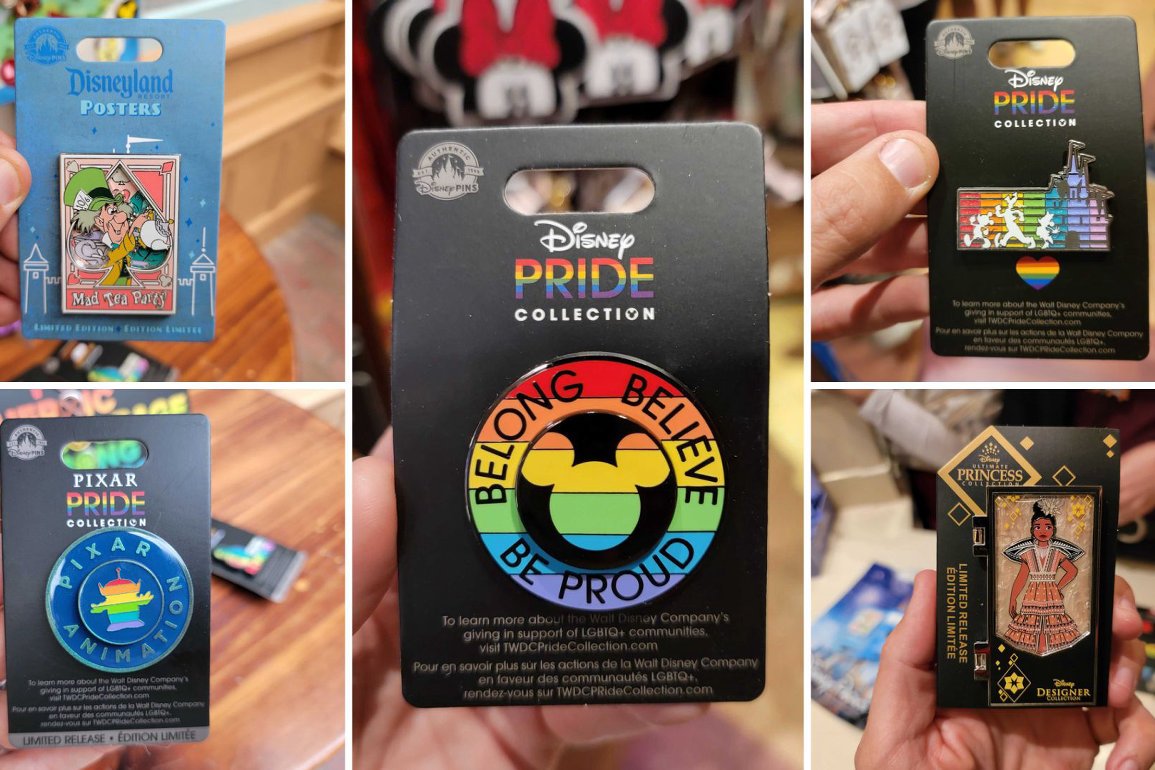 New pins have arrived at Disneyland Resort for the month of May, including several Pride Collection pins.

We found all of these, as well as the Moana Disney Designer Collection pin, in 20th Century Music Co. We found the rest of the pins in the Emporium.

This pin resembles a poster for Mad Tea Party, with the Mad Hatter pouring a pot of tea. He is pictured in a spade-shaped cutout, like a playing card.

Unfortunately, this pin is now sold out, according to Cast Members. It had a limited edition size of 2,000, but it’s unclear if all were released already or if more will arrive.

This pin is inspired by the Moana doll available as part of the Disney Designer Collection.

The front of the pin opens like a display box, and Moana is pictured in her designer dress inside.

Moana’s dress was designed by Nontra Null, and information about her is included on the packaging.

This pin features a rainbow silhouette of a “Toy Story” alien against a blue background. “Pixar Animation” is around the edge of the circular pin.

This pin features BB-8 colored with a sparkling rainbow. It reads “Belong, believe, be proud,” with the last two words in rainbow lettering.

This set includes six small pins. The backing card reads “power, heroic, courage, strong, protect, bold.” The “o” of each word is replaced with a pin of one of these superhero symbols: Spider-Man, X-Men, Captain Marvel, the Hulk, Ms. Marvel, and Black Panther. Each word and the corresponding pin is in a different color of the rainbow.

This circular pin features a Mickey head at the center and “belong, believe, be proud” along the edge. The Mickey and the edge are both rainbow.

This pin features Mickey’s full body. His shorts and shoes are rainbow-colored.

A Disney castle is at one end of this pin, with a rainbow rectangle jutting out of it. The white silhouettes of Mickey, Goofy, and Minnie march across the rainbow.