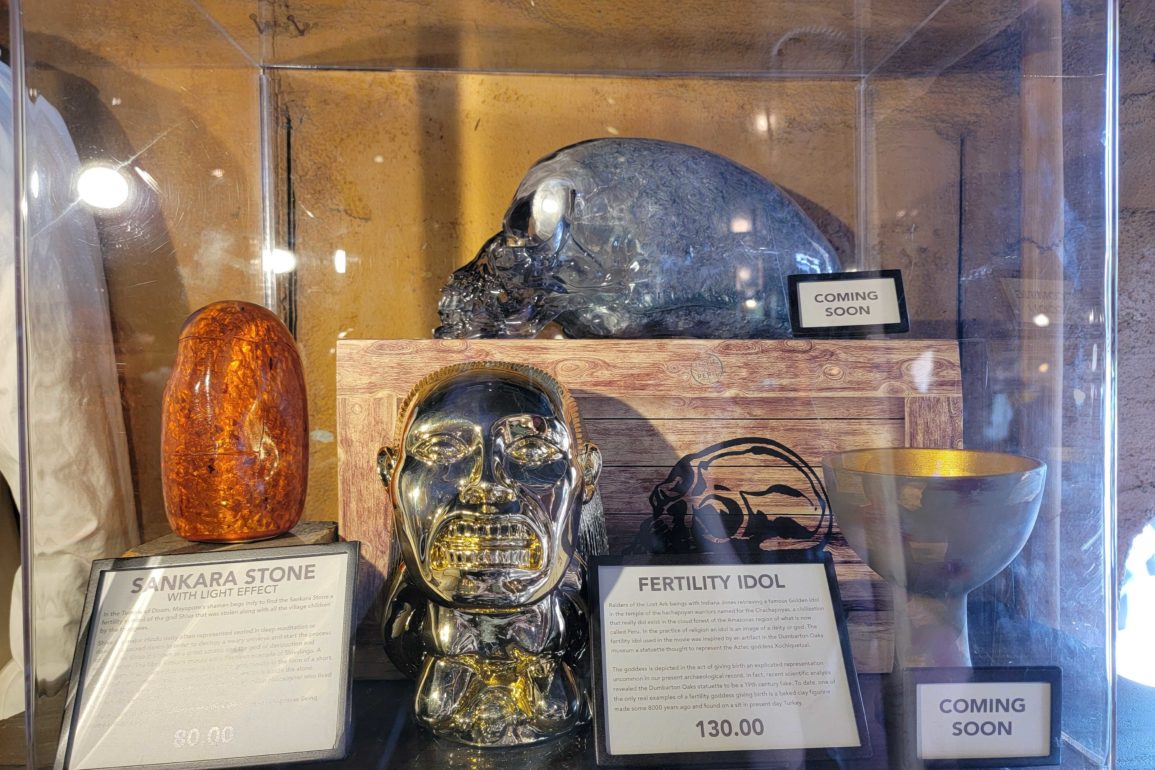 Adventurers and treasure hunters will want to make a stop at Disneyland Resort to check out the artifacts from the Indiana Jones line of merchandise. These precious items can be found at the Adventureland Bazaar and Disneyana.

In “Indiana Jones: Raiders of the Lost Ark,” Indiana stole the golden fertility idol from the temple of the Hachapoyan warriors. Collectors can now bring home a copy of this discovery.

The statue is of an ancient goddess giving birth through gritted teeth. The head is significantly larger than the body with very clear facial features and long hair.

The Sankara stone is a rich, molten orange and amber. The stone has a light effect within it as well.

Indiana Jones first came across this artifact in “Indiana Jones and the Temple of Doom.” Our charismatic hero was asked by Mayapore’s shaman to retrieve the stone and save the stolen children.

Indiana Jones found the legendary Holy Grail in the film “Indiana Jones and the Last Crusade,” an item said to have been used to collect the blood of Jesus, which gave it incredible healing powers.

The grail is not as sparkling or bejewel as the other artifacts with it’s worn metal and simple style. But it is one of the most mystical and memorable from the “Indiana Jones” series.

The Crystal Skull’s face a clear glass that shifts to opaque as the elongated skull continues. The brain cavity has an icy, crystalline texture. Perhaps this strange artifact is a bit too strange… perhaps even a bit alien.

Guests who purchase one of these items will take home their (not so priceless) priceless artifact in a cardboard box meant to look like a wooden crate.

The side says, “TOP SECRET ARMY INTEL 19818489 DO NOT OPEN,” which devoted fans might recognize as a reference to the years in which the main “Indian Jones” movies came out. “Indiana Jones and the Raiders of the Lost Ark” released in 1981, “Temple of Doom” released 1984, and finally “The Last Crusade” in 1989.

The other side features the item within.

The stamps include even more references to various Indiana Jones rides around Disney Parks. The Temple of the Crystal Skull stamp is a nod to the ride at Tokyo DisneySea.

Temple of the Forbidden Eye attraction at Disneyland is also referenced.

You can just barely see the Temple Du Peril from Disneyland Paris at the top.

The Indiana Jones Epic Stunt Spectacular at Walt Disney World also gets its own stamp.

What do you think of this museum-worthy collection? Is it worth taking the adventure down to Disneyland? Let us know in the comments below!