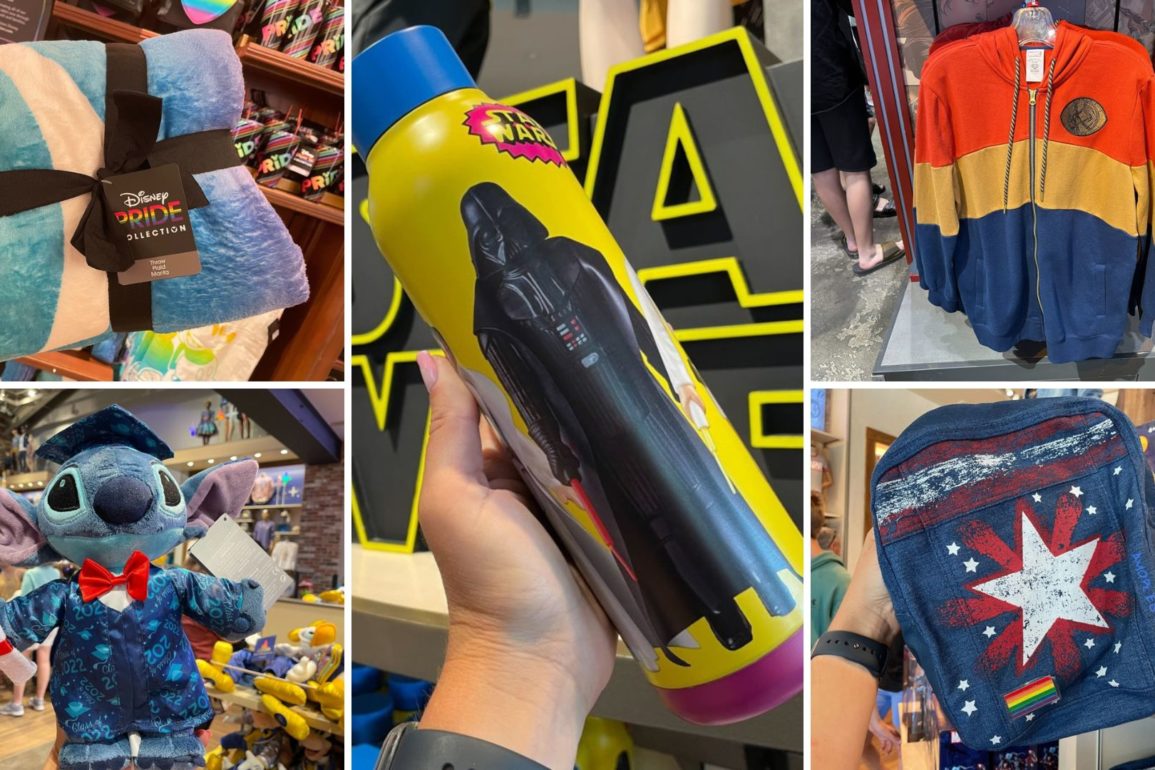 Welcome to the merchandise roundup for June 3, 2022! Each new day brings new merchandise to Walt Disney World, and we know you don’t want to miss a thing, so we gather new releases here. Today we visited Magic Kingdom, Disney Springs, EPCOT, Disney’s Hollywood Studios, and Disney’s Contemporary Resort; let’s look at our discoveries.

This Mickey-shaped piece hangs on the wall. Half is painted blue with two white buttons like Mickey’s shorts.

The “buttons” act as hooks.

Hardware for mounting the hanger is on the back. This was in the Emporium at Magic Kingdom.

This throw blanket comes folded and wrapped in a black ribbon.

The tag shows off the full throw design, which is an ombre rainbow with a heart in the center. A rainbow Mickey head is at the center of the heart.

This was in the Emporium at Magic Kingdom and World of Disney in Disney Springs.

This set includes two scrunchies. One is black and patterned with rainbow silhouettes of Minnie Mouse.

The other scrunchy is rainbow with images of Mickey’s face.

These were in Bay View Gifts at Disney’s Contemporary Resort.

This keychain has three charms hanging from a ring.

A long rubber strap is striped with a rainbow.

There is a rainbow Pixar ball charm.

The other charm features the silhouette of a “Toy Story” alien with “Pixar Animation” around him. The charm is circular and transparent.

This was in Carthay Circle at Disney’s Hollywood Studios.

This tiny Disney nuiMOs Loungefly backpack is a recreation of the full-size bag.

It’s black with a rainbow heart on the front.

It has black Mickey ears on the top.

It zips open and closed.

It has red interior lining.

It comes on a special Disney Pride Collection backing card.

This and the nuiMOs outfit below were in Star Traders at Magic Kingdom.

This outfit is part of Fashion Collection #7.

It includes orange sunglasses, a teal one-piece swimsuit, and an orange floral skirt.

This Stitch backpack was at Bay View Gifts in Disney’s Contemporary Resort.

It has a fold-over top that can be straightened out for more space.

It’s white and patterned all over with tropical flowers and images of Stitch. The front strap is blue with a buckle.

It has blue adjustable straps.

The interior lining is blue.

This throw blanket comes wrapped in a blue ribbon.

The tag shows what the unfolded throw looks like. It’s white and covered in blue waves. Stitch is featured on a surfboard and in a canoe. Angel is also surfing.

This throw, the dress, and the koozie below were in the Emporium at Magic Kingdom.

The dress is white with thin vertical stripes of green, yellow, and blue.

It has a ruffled neckline, and ruffles across the torse. The straps are dark blue.

A teal patch of Stitch playing guitar is on the skirt.

It features Stitch with a coconut drink under a palm tree.

The other side reads “high tides and good vibes.”

This cardholder features Stitch surfing on the magnetic clasp.

He’s in teal green and white colors, while the background is dark blue.

Waves are made out of white lines.

Three card slots are in brown above the waves.

The other side has a clear window for IDs. This was in Bay View Gifts at Disney’s Contemporary Resort.

This Stitch plush is dressed in a dark blue graduation cap and robe.

It has a yellow tassel.

He’s wearing a red bowtie and holding a white diploma.

In the Camera Center of Magic Kingdom, we found this Mickey Mouse backpack.

It’s a grey color, with sketches of Mickey and some of his friends on the front.

It has a small front pocket and a large zip pocket.

There’s also a hidden zip pocket on the back.

This backpack is inspired by America’s denim jacket.

It has a spray-paint white star with red lines at the center.

Smaller white stars are around the large one and a rainbow pride pin is in the corner.

“Amor es amor” (love is love) is printed on the side.

The white stars continue on the sides and straps.

The interior lining is bright blue.

This was in World of Disney.

This pen is almost like a figurine of Spider-Man perched on a lamppost.

He has one arm outstretched to shoot a web.

The bottom of the lamppost comes off to reveal the pen.

This hoodie is red, yellow, and blue — the colors of Doctor Strange’s costume.

The seal of Vishanti is embroidered on the left breast. It zips up and has a gold and blue drawstring on the hood.

The back is solid red instead of striped, to resemble Strange’s cape.

This was in Marvel Superhero Headquarters at Disney Springs.

This Corkcicle sport canteen is 20 oz. It is triple-insulated with stainless steel and easy-grip sides.

It is red with a blue web pattern across it.

It has a blue cap with a silver ring.

A straw pops up.

This was in Keystone Clothiers at Disney’s Hollywood Studios.

This shirt is white with a pink square on the front.

Graffiti-like splatters of color are within the square with the words “May the Force be with us.”

This was in Star Traders at Magic Kingdom.

This white polo also looks like it has been splattered with colorful paint.

The retro Walt Disney World logo is on the left breast.

Images of Cinderella Castle are within the paint splatters.

This was in Bay View Gifts at Disney’s Contemporary Resort.

This white tee has a pink neckline. The edge of one sleeve is blue and the edge of the other is green.

It reads “Totally Mickey Mouse” on the front.

There are Mickey heads on each sleeve. One is light blue.

The other is light pink.

The back is solid white.

It includes a red panda suit to “transform” Mei into her panda form.

This and the Funko POP! below were in Mickey’s of Hollywood.

This figure is Mei in human form winking.

This plush is a small version of Meilin in her red panda form.

It includes her pink backpack on her back.

This set comes in a plastic case shaped like a red panda head.

It includes figurines of Mei in both her panda and human forms, Priya, Abby, and Miriam. Their tops all have a layer of sparkles, and Mei and Miriam are singing into microphones.

This fuzzy journal resembles Meilin in her red panda form.

Her face is embroidered on the front and ears stick out of the top.

Her striped tail acts as a clasp.

It hangs from the back of the journal.

Inside is a loose-leaf binder, sticker sheets, dividers, a pen, and a PVC zip pouch.

The zip pouch is decorated with red panda images, clouds, CDs, roller-skates, and other icons from the early 2000s.

The dividers of the book each feature Mei as a human or red panda.

We found this in Fantasia Gifts at Disney’s Contemporary Resort.

One Hundred and One Dalmatians Ornament – $24.99

This ornament features a London street, double-decker bus, and Pongo and Perdita from “One Hundred and One Dalmatians.”

The base resembles a stone street, and reads “Spotted at the United Kingdom.”

This was in World Traveler at EPCOT.

This ornament features Minnie and Mickey, standing atop a blue base.

They are wearing their classic yellow shoes and red outfits.

Sleeping Beauty Castle, decorated like the American Flag, is behind them.

This bottle features action figures of Darth Vader, Luke, Leia, and a Stormtrooper.

The bottle is yellow, with a pink bottom, and a blue cap.

It reads “Collect them all!”

This bottle and the one below were both in World of Disney at Disney Springs.

His face is outlined in blue and occasionally gold.

The bottom and lid both have a golden finish.

This blue and white tie-dye bottle has images of Marie along the bottom. “Ooh la la” is in black cursive on one side.

This was in Creations Shop at EPCOT.

This Mickey-shaped beach basket was in Bay View Gifts at Disney’s Contemporary Resort.

The basket is blue and holds blue, red, and yellow toys.

We found the latest Tiny Kingdom mystery box in The Darkroom at Disney’s Hollywood Studios.

Each box contains three out of 24 possible pins.

Stitch is holding a yellow blaster on this pin.

He includes a stand.

This was in Frontier Trading Post at Magic Kingdom.

Vault Collection MaDe Phone Cases – $29.99 each

This case is patterned all-over with the logos of various Magic Kingdom anniversaries.

This one features a white outline of Cinderella Castle against a blue background.

Finally, this case is patterned all-over with images of Orange Bird, orange slices, and white flowers.

There are also two new “Spider-Man: No Way Home” phone cases in MaDe kiosks.

This one features the three Spideys looking out from a web design.

This case features a close-up of Spider-Man’s eye with the silhouette of Doctor Octopus.

There are four new Spider-Man magnets.

This one features the three Spider-Man swinging through NYC.

This design resembles a torn comic, with different Spidey suits showing through the missing pieces.

Spider-Man crawls forward on this magnet, with the villains of “No Way Home” behind him.