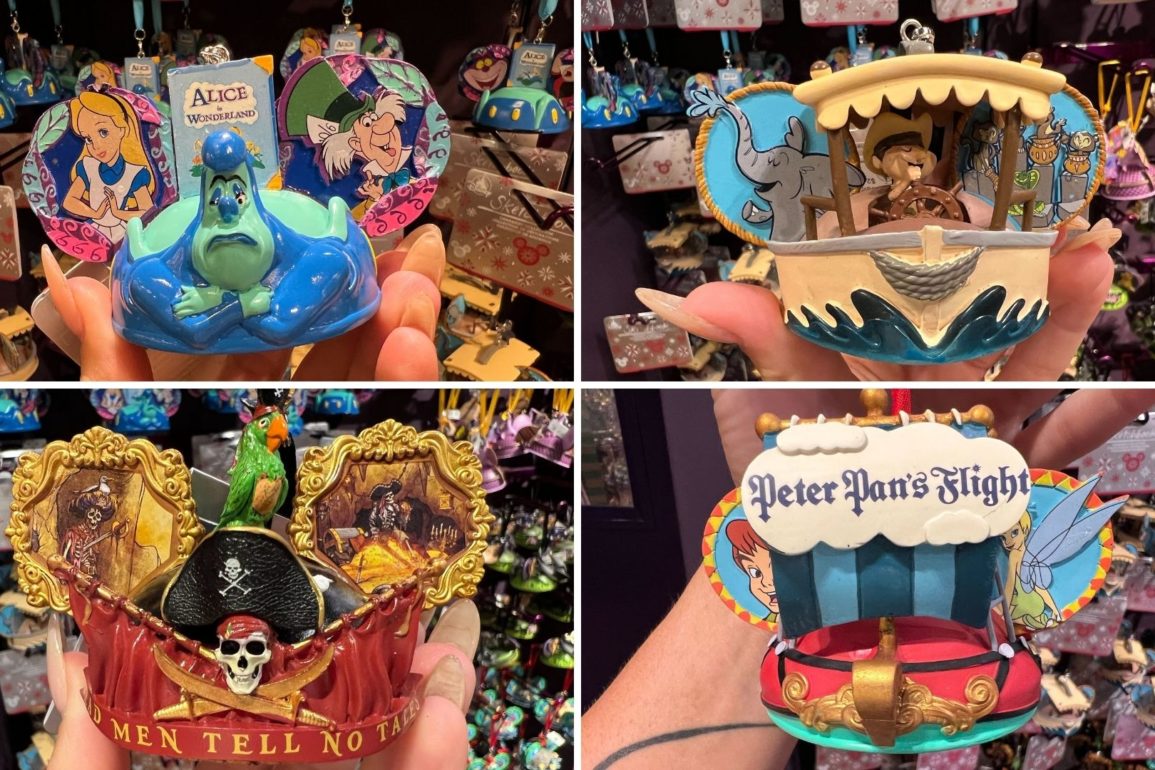 Prepare for Christmas early with these four new ear hat ornaments, now available at Days of Christmas in Disney Springs. The ornaments are shaped like Mickey ear hats and inspired by various attractions from both Disneyland and Walt Disney World: Alice in Wonderland, Jungle Cruise, Pirates of the Caribbean, and Peter Pan’s Flight.

This ornament is inspired by the “Alice in Wonderland” ride of the same name at Disneyland Park.

The base of the ear hat ornament resembles a blue caterpillar ride vehicle.

Alice and the Mad Hatter are on the fronts of the ears, with pink, green, and blue leaves around them.

Cheshire Cat and the Queen of Hearts are on the backs of the ears. Instead of a bow at the center, there is a blue “Alice in Wonderland” book, just like guests see at the entrance to the ride.

Tweedle Dee and Tweedle Dum are on the bottom of the ornament. Costa Alavezos designed these ornaments.

A skipper drives the boat, which has waves crashing around it. Monkeys and a snake from inside the ride’s temple are on one ear.

An elephant sprays water from its trunk on another ear.

Two blue piranhas are jumping across the back of the boat. The backs of the ears feature a hippo and gorilla.

The bottom is blue, with two tiki torches.

This ornament has Peg Leg Pete the green parrot sitting on top.

A red sail is across the front, above the words “Dead Men Tell No Tales.” A skull sits at the center, with a pirate hat and crossed swords.

The golden ears have painted images from the ride, including a bird nesting atop a skeletal figure.

A skeleton atop a pile of gold is on the other ear.

Smiling pirates in red and blue bandanas are featured on the back of the ears.

The Pirates of the Caribbean logo is in red and yellow against a black background.

Two mermaids are on the bottom of the ornament.

The base is a red, gold, and green pirate ship. Two sets of blue striped sails are on top.

The Peter Pan’s Flight cloud-shaped sign is on the front of one sail. Tinker Bell and Peter Pan are featured on the fronts of the ears.

Captain Hook and Tick Tock the Crocodile sneer from the back of the ears.

The Lost Boys are on the bottom.

Which of these ear hat ornaments will you be hanging on your Christmas tree this year? Let us know in the comments.

Next
Walt Disney World Announces Orlando and Tampa Hiring Fairs For June, Bonuses Up to $1,500