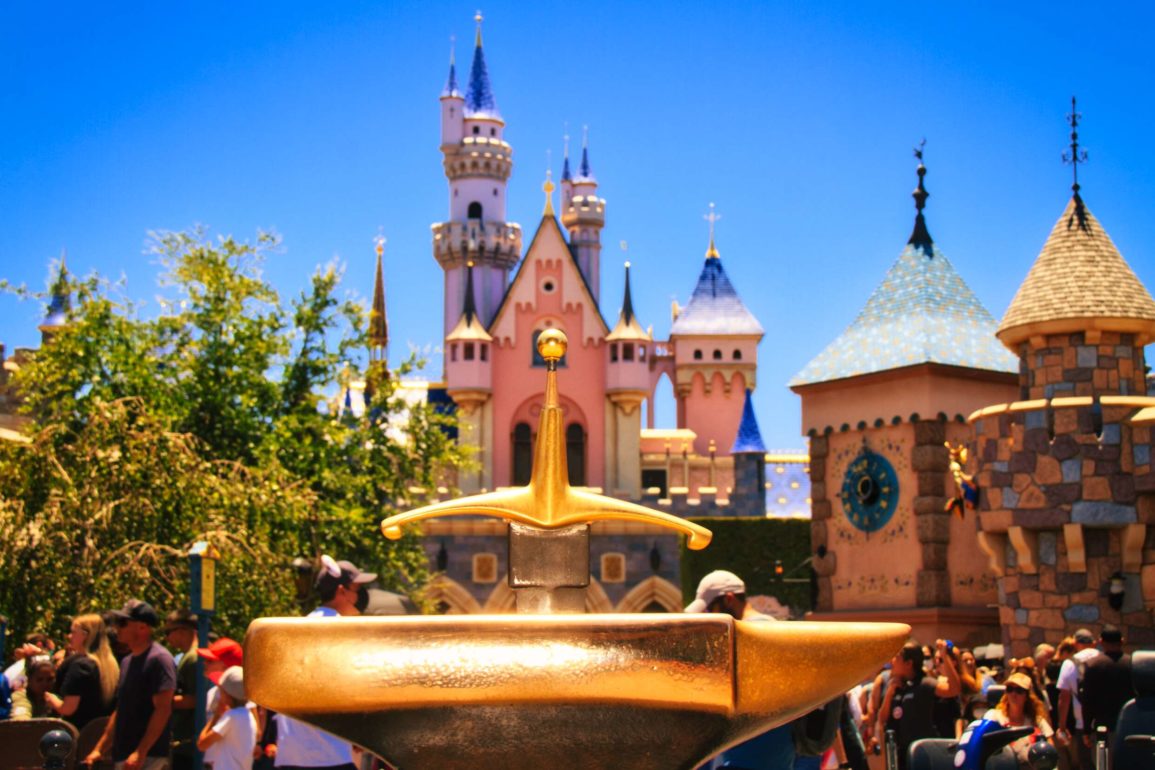 PHOTO REPORT: Disneyland Resort 6/21/22 (The Longest Day of the Year at the Happiest Place on Earth)

Hey there, hi there, ho there! We headed down to the Disneyland Resort to meet a Space Ranger, shop for some pins and enjoy the longest day of the year at the Happiest Place on Earth. So join us for this most recent photo report from both parks.

On our way in, we caught a couple of stowaways who hopped a ride to get into the resort. They froze still when we looked their way, but they were gone when we turned back a moment later.

In World of Disney, we found some Main Street Electrical Parade shorts and leggings, which join the growing MSEP collection to celebrate the 50th anniversary.

Also in World of Disney, a new Spirit Jersey lets everyone know that we’re up to no good with the other villains.

We took the Monorail in to the park so we could check on the progress over at Finding Nemo Submarine Voyage. The lagoon is refilled and the sub hatches are open. It’s only a matter of time before the seagulls land on that buoy again and the ride is ready to reopen.

We did see the angler fish hanging out backstage, however, so work is still being done.

On Main Street, U.S.A., the dated Main Street Electrical Parade shirt that was a special release on our last visit is still in stock, and actually more sizes are in stock now than when we were here on the evening of June 17.

We also picked up this commemorative pin to celebrate the occasion of the MSEP 50th anniversary date.

Speaking of pins, there was a motherlode of Disneyland Park pins released today.

The art style on these is just adorable. You can see all the pins we found today in our post right here.

We also found a new collection of Dooney & Bourke bags featuring “Lady and the Tramp” at Disney Clothiers.

It was a beautiful day today, and it’s also the Summer Solstice, the longest day of the year. Since we’re not burning daylight as fast as any other day of the year, we took some time to go on a little photo tour of some sunny spots around Fantasyland.

Everything is so beautiful here at Disneyland, it’s hard to take a bad picture.

Up in Toontown, the spire of the El CapiTOON Theater is receiving more embellishments as construction continues.

And we can see through an unprotected area that the ground in the entry walkway has been all torn up to excavate the dirt.

In New Orleans Square, there has been no major visible change to Pirates of the Caribbean or the former Tarzan’s Treehouse. Everything is behind walls and tarps. But the bridge over the Pirates entrance affords a nice vantage point to take in the view of the Rivers of America.

Hungry Bear Restaurant has received new trash cans with bilingual wording. The recycling can now has an area for liquids and the “Food Only” can is brand new.

Star Wars: Galaxy’s Edge still doesn’t display in the app at certain zoom levels, and is instead covered with the green foliage and wording that was hiding the land before opening. Seeing as it’s been just over three years since the land was revealed on the map and opened to the public, hopefully this can get fixed soon.

Inside the Marketplace of Black Spire Outpost, Boba Fett was hanging around to make sure there was no trouble.

Outside of Star Wars: Galaxy’s Edge, we ran into some trouble with an Imperial presence in Tomorrowland outside of Hyperspace Mountain.

Captain Buzz Lightyear helped us out of our scrape with the Stormtroopers and we’re grateful for Star Command’s help.

We first met Captain Lightyear when he was meeting over at Tomorrowland Terrace stage, but he has since moved to the former Space Mountain FastPass distribution area with his own fancy backdrop.

Seaside Souvenirs is undergoing a refurbishment, and at one point we thought that it was going to receive a name change when the sign was patched over to hide the name. But the whole billboard has been repainted now and is looking new and spiffy.

The other billboard has also been repainted and has the Seaside Souvenirs name back on a scroll made of mesh metal.

Characters in Avengers Campus are finally listed in the Disneyland app with meeting times. It has sometimes been a headache trying to find out when our favorite characters will be appearing between missions on campus, and while it’s not a specific time of when we can see someone, it’s a ballpark window which is much better than what it was before — namely, just hang out and see if your favorite Avenger is even here today.

While in Avengers Campus, we couldn’t pass up the chance to see Spidey swing into action.

He’s almost as impressed as we are that he stuck the landing.

It’s getting warmer as the day goes on, and wait times are climbing steadily.

The Grad Nite Reunion event is on its way and one of the stages is already set up outside Pacific Wharf Café for Karaoke Disco.

One final parting shot from Pixar Pier. It’s a warm day on the pier, but it’s so beautiful out that it feels like a postcard kind of day.

Now for the most important decision of the day — how to cool off: Mickey Premium Bar or Mickey Ice Cream Sandwich? Let us know your vote in the comments below.

Well, that’s it from us here at Disneyland. We’re glad you rode along. We’ll see ya real soon!