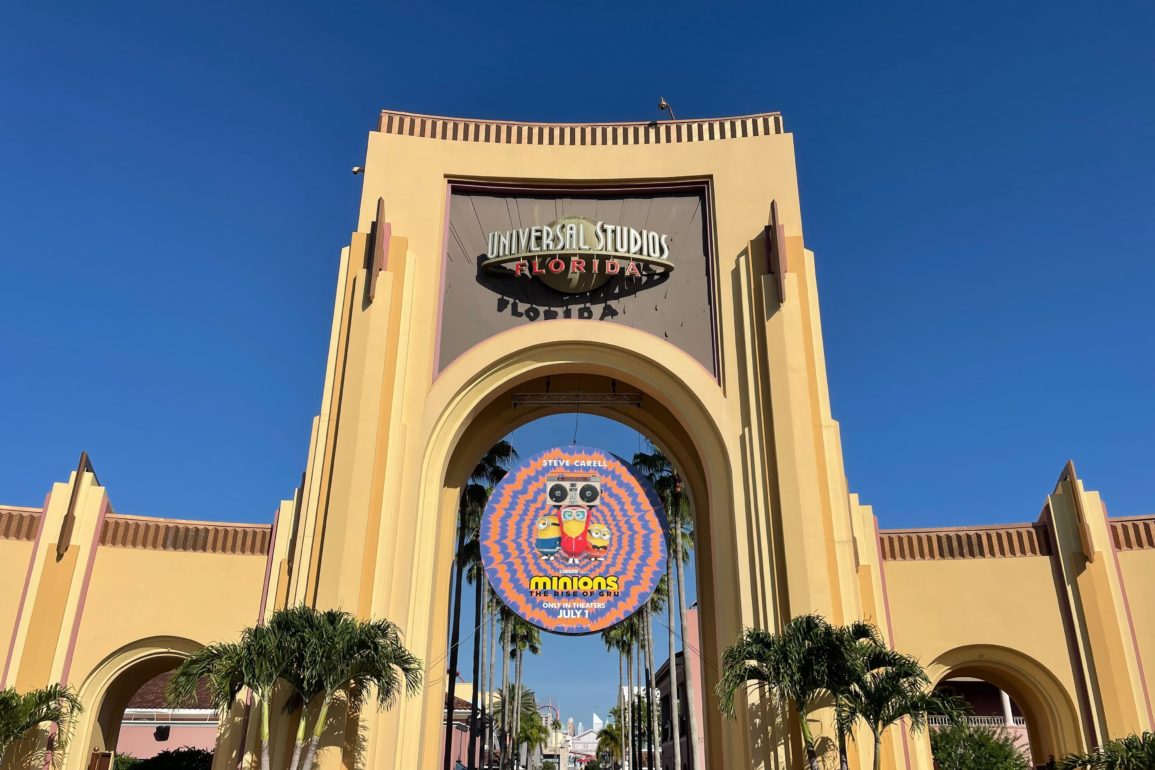 It’s another beautiful day here at the Universal Orlando. Resort and we’re ready to hit the parks. Prepare yourself for a summer full of Minions! As soon as we arrived at Universal Studios Florida, we were greeted by a large banner for “Minions: Rise of Gru”.

The new movie will be in theaters on July 1. Minions really seem to be taking over.

A game is set up in the area in front of Music Plaza Stage. It was really sunny today so it was hard to see it lighting up, but on an overcast day or in the evening, it should be easier.

It’s still too early for Halloween Horror Nights signs, so we assume this is going to be an entrance for a preview of the new Minions movie. There was a similar thing done for Sing 2 last year.

The video playing at the exit of Despicable Me: Minion Mayhem has been updated for the new film. Be sure to stop and dance along with the groovy looking Minions on the screens.

Over by the Horror Make Up Show, a new photo op has been set up. You can meet a Minion with this psychedelic backdrop.

Our Minion friend here seems to have gotten a bit of a redesign, too. Looking good!

You really can’t hide from the influence of the Minions around here.

Inside the UOAP Lounge, they were giving away free granola bars today. This isn’t something that’s offered every day, but we’ve been noticing a lot of new perks here and there.

We recently found a new Loungefly Back to the Future backpack, and now there’s a matching wallet and crossbody bag. Take a closer look at them in our post here.

There’s something else new inside the Tribute Store, too! We spotted a new addition to the table in the projector room at the exit of the new Tribute Store. This looks like it could possibly be hinting at something for Halloween. We’ll be looking closely for more hints!

The Media Center was looking for participants today, so since we qualified, we decided to escape the heat and get involved. If you qualify to help out, you’ll be given a Universal Orlando gift card for your time!

Most of Fievel’s Playland has reopened. There’s a few areas still closed off with construction walls, but the water slide in open!

It’s a great day for a ride of Fievel’s Water Slide. We’re happy to have it back.

Shrek and Fiona are now meeting in the courtyard of the DreamWorks Destination. Donkey should be joining them soon. Construction walls are up around the former meet and greet location, but it looks like Donkey will be relocating to the old Barney Shop. The stone fencing blocking off the area looks like it was taken from the former location.

The animals around Port of Entry have been getting refreshed and this big cat is looking much better with those nice new teeth!

Crowds have been pretty chill today around the parks. Even the Wizarding World is calm.

The stage in Hogsmeade is getting its annual refurbishment. The shows aren’t taking place, but you can still meet with the Wizards and Witches and take photos with them in the area.

Blue’s Churro Bites have been added to the menu at Natural Selections in Jurassic Park. We loved the Blue Churro previously, so it’s good to see it back on the menu in bite size. They’re even served in cups with a Jurassic World: Dominion sticker.

Small refurbishment in Toon Lagoon outside of Toon Extra. There is normally a cannon here.

Another prop is missing! In Marvel Super Hero Island, a rather large photo op is missing. A tiny blue box is holding its place.

Thanks for joining us around the parks today. It’s been a very busy day, so we’re going to get out of here, but be sure to stay tuned for more updates!

Next
REVIEW: Dive Into The Chocolate and Red Velvet “Jaws” Fishbowl Cakes from Tribute Store at Universal Studios Florida