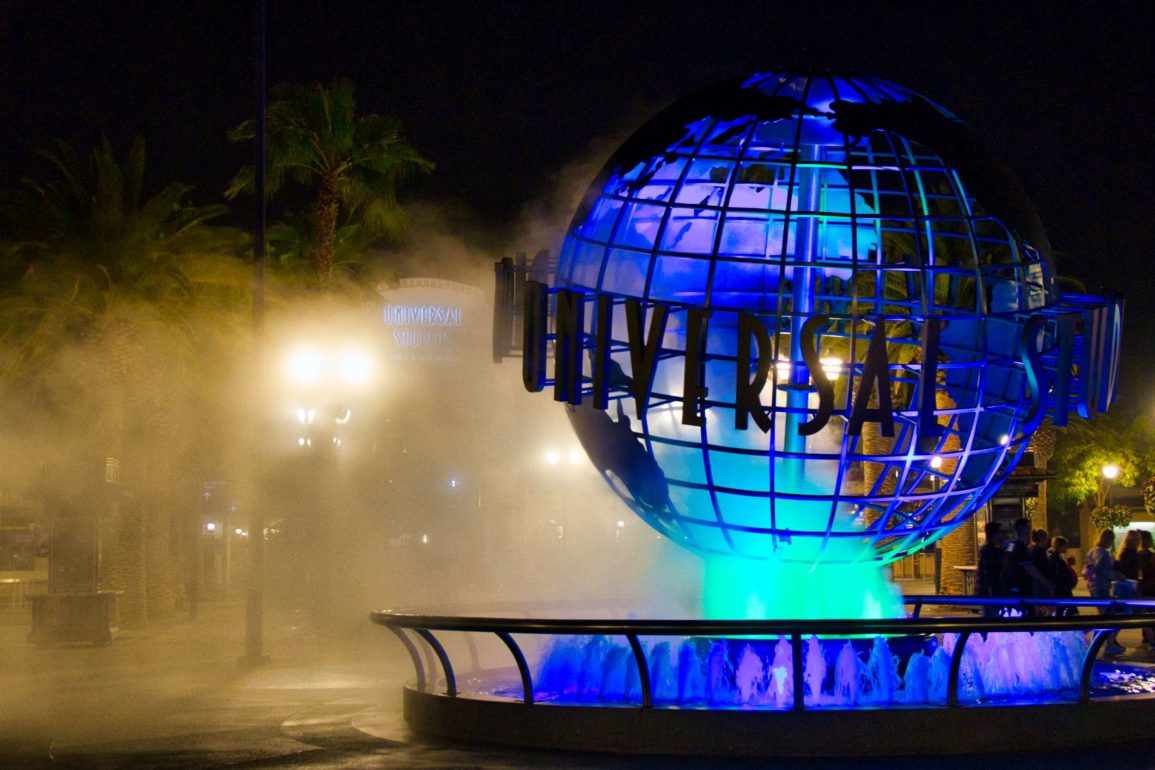 Before we headed into the park for the nighttime event, we needed to load up on sugar with this new Jurassic World: Dominion themed doughnut from Voodoo Doughnut. You can see our full review on our YouTube channel, or by clicking on the video below:

We were here for the event but it didn’t start until later in the evening, so we headed into the park to see the setup process.

The focal point to the takeover event was in Universal Plaza with the Coke Party Zone. This was the same area that was set up for Grad Bash, but now has USH Pass Member decals on the DJ booth.

The bottom runners still featured the tossed grad caps and even the digital signs still read Grad Bash as the switch over was made.

Inside the Universal Studios Store, Upper Lot, we found a new Ghostbusters Employee Welcome Kit for any aspiring ghost hunters out there.

There are plenty of the new Minion popcorn bucket still in stock. One might say TOO MANY Minions, in fact.

The opening date has been released only as “Early 2023” and that is now reflected here on the construction wall sign.

As the sun starts to set, with the light coming in at an angle, the smog can really be seen in earnest. It’s hard to get a clean shot inside Super Nintendo World because of the heavy, side-lit smog.

And it’s not just around the park, it’s the whole valley. The whole LA basin, in fact.

As the sun’s rays painted the tops of buildings and the evening approached, it was time for the Pass Members to take over the park for the event.

Check-in and lanyard disbursement was at the far right side of the entrance turnstiles.

We received our commemorative credential and were ready to hit the park.

The sunset and clouds made a beautiful backdrop for entering the main attraction of the takeover — the Coca-Cola Party Zone in Universal Plaza.

The area featured dueling DJs, which was less dueling and more just two DJs hyping each other up.

There were also lawn games, themed to Coca-Cola.

Two sitting areas were at the edge of Universal Plaza to enjoy the very loud music and sip your complimentary sample of Coca-Cola Starlight, their new limited edition flavor.

This led to both sitting areas being littered with abandoned cans within minutes of opening.

For fans of classic Coca-Cola, Mel’s was also offering a Chocolate Coca-Cola Float for purchase. We got to try this float recently, and you can see our full reaction on our YouTube channel, or by clicking the video above:

Universal was very proud of the fact that “it’s not on the menu, so you’ve got to ask for it when you order,” according to their email and website statements. Except that it is on the menu, stuck as a window decal to every cash register.

Set up in a few locations throughout the park were these green screen photo booths where guests could digitally stand in front of a branded step-and-repeat for the event.

We couldn’t pass up the opportunity to ride the Studio Tour at night. We usually do the tour during the day, so seeing it all lit up at night is a real treat.

Amity is just beautiful at night.

And despite the bright lights and the dark darks, it’s still cool get this imposing photo of the Psycho house and Bates Motel.

Another DJ was set up on the Lower Lot in front of Jurassic World — the Ride.

The photo ops set up for the Grad Bash were left out and turned on for guests of the takeover event as well.

A gobo for Pass Members lit up the side of Jurassic World — the Ride, and we couldn’t resist a nighttime trip on the river.

When we went to board, we noticed that the single rider line is back open again.

You can ride along with us to see the river cruise at night during the takeover event on our YouTube channel, or by clicking the video below:

With the event drawing to a close, we took the opportunity to take some nice photos of the park at night.

The very active lights shooting out from Universal Plaza made for a nice backdrop.

And as the park emptied out, we could take our time with nice, clean shots.