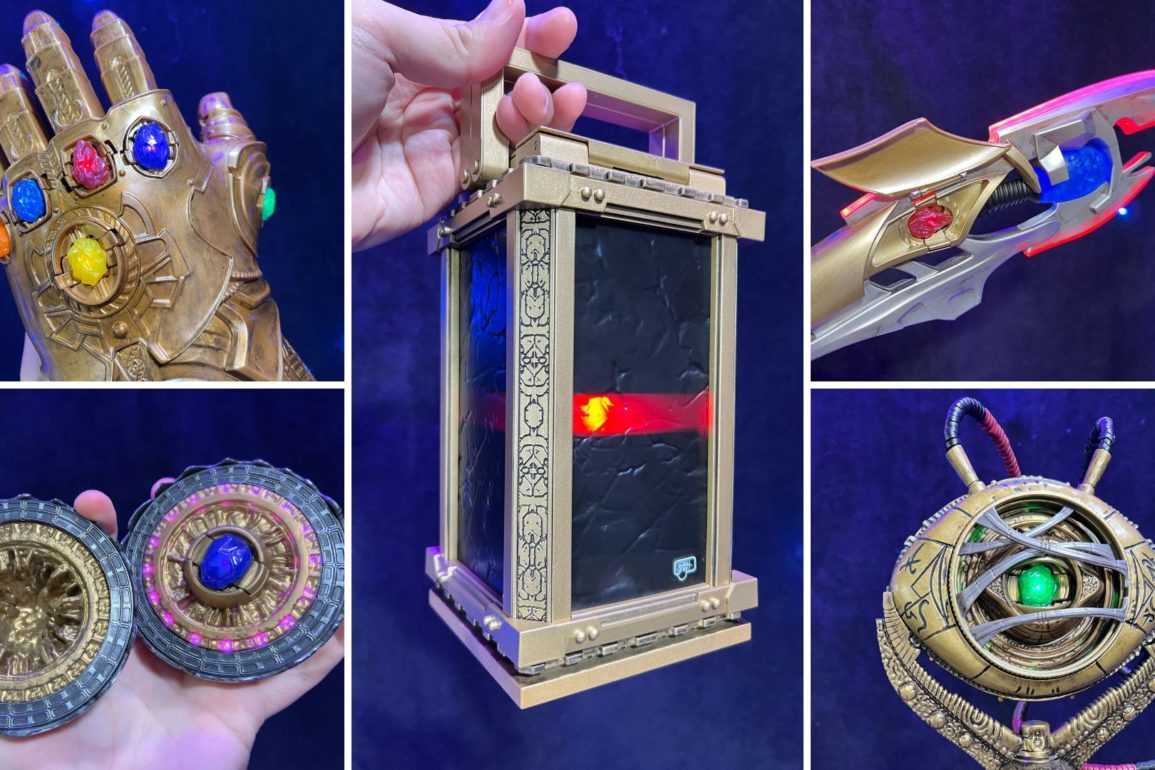 With the opening of Guardians of the Galaxy: Cosmic Rewind, EPCOT released a new line of interactive infinity stones and their respective objects as they appeared in the Marvel Cinematic Universe. Watch our unboxing video of these items, and scroll down for photos of each one.

Five of the Infinity Stones can be purchased as a set in this briefcase.

The orange Soul Stone is the only one missing. It comes with the gauntlets below. Each of the stones is also available with its respective item, so if you’re buying all of the items, you don’t also need to buy the briefcase.

All six of the Infinity Stones come with this gauntlet and the golden gauntlet.

This red and gold glove is inspired by the one on Iron Man’s arm when he wields all six Infinity Stones.

The stones themselves have small magnets on one side.

The magnets then click into place on the gauntlets and the other objects.

Both gauntlets make sounds and vibrate when you add the stones and move the fingers.

All of the infinity stones and the objects are plastic, but well made.

There are circular slots inside for your fingers to operate the gauntlet.

The golden gauntlet resembles the one worn by Thanos.

It operates the same as the Iron Man gauntlet.

Each of these objects comes in packaging resembling grey crate with screens and lights on the outsides — but it’s actually all just cardboard.

The Tesseract is a blue cube, and first appeared in “Captain America: The First Avenger.”

It comes with the blue Space Stone.

With the Space Stone installed, the Tesseract will light up blue.

If you install a different stone, it will light up in a different color. Above is the Tesseract emitting red light thanks to the Reality Stone.

The Orb includes the purple Power Stone, which first appeared in “Guardians of the Galaxy.”

The Orb is a silvery sphere. It includes a three-clawed stand.

The Orb has a break across the center to open it into two pieces. The pieces are magnetic so they stay together.

The stone can be installed inside the Orb, where it triggers lights under the stone and around the edge of the gold area. It also makes sound.

It also vibrates and makes sounds when you close the orb and move it around.

The piece that holds the stone can be removed entirely from the Orb. This is where the on-off switch and speaker are hidden.

The Aether and the Reality Stone were introduced in “Thor: The Dark World.” Each object includes instructions.

The Aether is a rectangular box with black sides and golden edges. There are two adjustable handles on top.

It opens from the top.

Again, different stones can be installed. The included Reality Stone triggers a red light around the outside.

Other stones create different colored lights in a stripe around the box.

To activate the lights, you also need to touch the outside where stickers indicate.

The on-off switch, battery compartment, and speaker are on the bottom.

It comes with a matching golden stand, but the necklace portion can be removed.

When you click a stone in, it appears to light up and it makes sounds.

You can spin the silver-grey pieces to actually close the pendant around your chosen stone.

The actual necklace is black and red rubber with a few golden pieces.

It has an on-off switch on the back.

Finally, Loki’s scepter is the biggest and most expensive of the objects. Loki wielded this with the Mind Stone in “The Avengers.” It’s the only item other than the gauntlets that doesn’t include a stand.

There are buttons on the scepter to activate different lights, sounds, and vibrations.

The on-off switch is at the bottom.

Though the end of the scepter is blue, the Mind Stone is yellow and goes into a compartment on the handle.

The edges of the scepter blades light up the respective color of the installed stone. Here it is with the yellow mind stone.

And here it is lit up red with the reality stone.

All of these are available now at the Creations Shop and Treasures of Xandar at EPCOT.

Will you be collecting any of the Marvel Infinity Stones? Let us know which one is your favorite below!