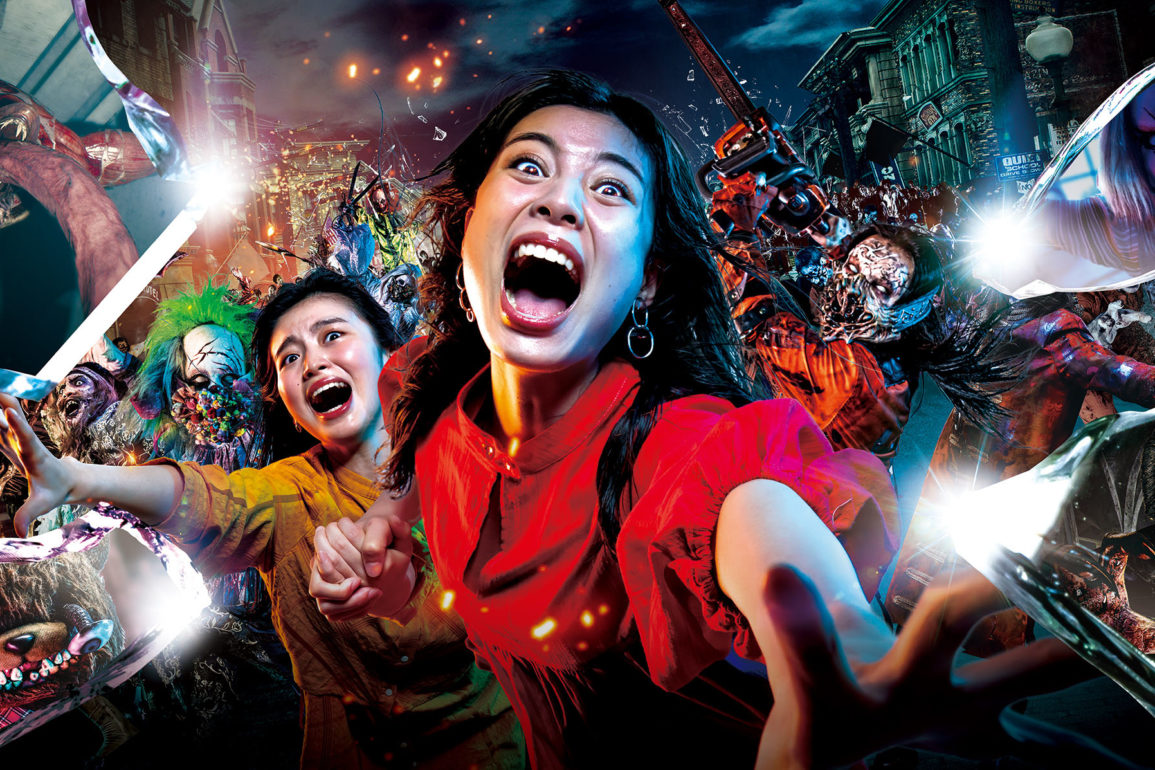 Fear is back at Universal Studios Japan as they’ve revealed their full Halloween Horror Nights slate for 2022, the first fully-realized event since 2019! The park is promoting it as “the return of fear” featuring four horror attractions, the most scare zones ever, and a time to lift the stresses after years of limits and self-restraint. And for the little ones, there’s some less-scary offerings at the park as well including a new Sanrio character.

Based on the iconic “Resident Evil” game franchise, Biohazard: The Extreme returns for the first time since 2019. Set in Raccoon City from last year’s “Resident Evil” film, guests must survive the threat of zombies and creatures that attack at the police station where you’ve escaped! The house offers two different routes — Leon’s Route and Claire’s Route, each with different horrors awaiting you, and your actions affect your journey. Experience ultimate tension and exhilaration as you confront the creatures with your friends, and the terror of confronting the Tyrant and Licker that appear before your eyes!

Based on the Universal Monsters house from Halloween Horror Nights 29 at Universal Orlando Resort, this house is brand new in Japan. You’ll find yourself in a cemetery in the dark, running away from the onslaught of monsters… Werewolves, Frankenstein, Dracula… Can you survive the hell you’re about to enter?

The horrifying slaughter of the patients is about to begin again. The cruel and ferocious dolls are here to attack, mutilate, and dismember the patients! Now you’re caught in a very realistic and uncomfortable, ready to experience the tension of Chucky chasing you all the way to the exit.

Sherlock Holmes: The Curse of the Rose Sword

Returning from last year’s Halloween Horror Nights, this stage show takes guests into the journey of a ritzy 1930s Hollywood movie premiere, where a cursed red sword slowly brings to live a spirit which murders the stars and crew. And you could be next. We experienced this show last year, and it had excellent production value, we highly recommend it.

The street zombies return to the park’s scare zones this year, with the most variety and number of dancers in Universal Studios Japan history! This year, Hamikuma the creepy teddy bear which first appeared last year is in control, and brand-new projection mapping throughout the scare zones will dial the terror up to infinity!

The street dance parties return this year complete with the iconic Rat-Tat-Tat Dance, which will make its final appearance this year. where everyone dances with their whole body together! Each of the scare zones will feature a variety of new shows, including a juggling show by the eerie circus troupe led by Hamikuma, a new and bizarre dance by decaying zombies, and even a stage performance by gothic vampires!

A special greeting featuring My Melody and Kuromi, who’s making her first-ever appearance at Universal Studios Japan, will take place throughout the day in the Hollywood area, complete with adorable new witch costumes.

The Minions will of course return to Minion Park in their annual Dracula, Frankenstein, and Bride of Frankenstein costumes.

For Halloween, guests of all ages can say “trick-or-treat” to Crew Members for a free treat before 5:00pm. Just look for the orange shoulder bag with a goofy jack-o’-lantern design in all areas of the park except Super Nintendo World and The Wizarding World of Harry Potter.

Dance and play along with friends from Sesame Street, Peanuts, and Hello Kitty to celebrate the Halloween season!

The map above shows both the scare zones planned as well as the safe zones (which are Minion Park and Universal Wonderland). Super Nintendo World presumably will also be safe, and no plans have been announced for the return of Death Eaters or other Halloween festivities to The Wizarding World of Harry Potter, so those areas should be safe for little ones too.

Are you excited for the return of Halloween Horror Nights to Universal Studios Japan? Let us know in the comments below!