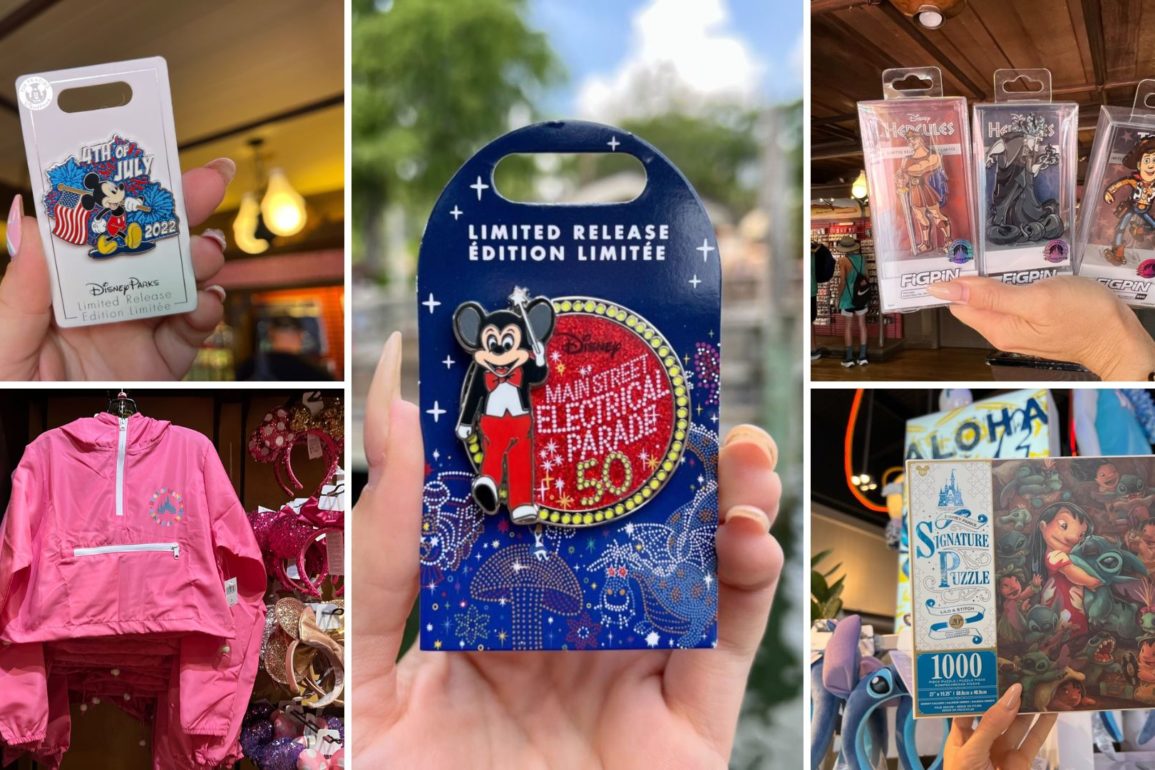 Welcome to the merchandise roundup for June 29, 2022! Each new day brings new merchandise to Walt Disney World, and we know you don’t want to miss a thing, so we gather new releases here. Today we visited Magic Kingdom, Disney’s Animal Kingdom, Disney’s Contemporary Resort, and Disney Springs; let’s look at our discoveries.

This skateboard is patterned all over with Disney characters, like stickers your nuiMOs plush may have stuck on it.

Among the characters are Stitch, Mickey, Donald, and the Mad Hatter.

This and the nuiMOs turntable were in Bayview Gifts at Disney’s Contemporary Resort.

This turntable is red with a black record on top.

These new sour gummi worms were in the Main Street Confectionery at Magic Kingdom.

The bag is pink with Stitch’s friend Angel.

The gummi worms are multi-colored.

This oven mitt is coated in transparent silicone for extra protection.

The silicone is patterned with Mickey heads.

The mitt beneath is light blue and patterned with kitchen items inspired by Mickey and friends.

The characters themselves also appear. This was in the Emporium at Magic Kingdom.

This white tee features Heimlich from “A Bug’s Life,” after he has grown his butterfly wings.

It reads “I’m a beautiful butterfly!” A rainbow and flowers are around Heimlich, reminiscent of 1970s “hippie” designs.

This and the tee below were in the Emporium.

This shirt is black, with the silhouette of Cinderella Castle on the front. A rainbow radiates out from it.

It reads “Radiate happiness” in the castle, with three Mickey balloons floating across it.

We found a pencil bag inspired by “Turning Red” at the Emporium.

It is translucent blue with sparkles.

It’s covered in images and phrases from the film in a hand-drawn style, like Meilin Lee drew on the bag herself.

Mei’s face is on the center of one side, above the words “I got this!”

On the other side, it reads “Totally my own person.”

Attached to the zipper are red panda, pom-pom, and heart charms.

Celebrate 50 years of the “Main Street Electrical Parade” with a parade-inspired outfit. These shorts are black, with a pink waistband and blue drawstring.

On the front of one leg are several floats from the parade, with dots around their edges representing their lights.

The other leg reads “Disneyland Main Street Electrical Parade 50th anniversary.” The pockets have a stripe of blue on their edge. The design also glows in the dark.

The parade floats are also pictured on the back, with music notes floating behind them.

This and the leggings below were in the Emporium.

The leggings are also black.

They have stripes running down the sides featuring the same parade float pattern as the shorts.

Among the floats is Mickey Mouse, leading the parade.

It even has a carrier for Sox.

Both figures are poseable.

This water bottle has a removable and double-sided rubber sleeve.

One side is dark blue, with Stitch lounging under a palm tree.

The bottle is clear with a brown wood lid.

The other side of the sleeve is white.

It has smaller images of Stitch surfing and kayaking across several waves.

The bottle was in Star Traders at Magic Kingdom.

This signature puzzle was also in Star Traders. It features Lilo hugging Stitch in the center.

More images of Lilo and Stitch are around the hug.

It celebrates the film’s 20th anniversary.

This cap is tie-dye blue.

Stitch and “awesome, wild, wacky” are embroidered on the front.

This ball cap and the Stitch apparel below were in the Emporium.

This tee is yellow, with thin blue and white stripes across the chest.

A wave rises from the stripes and Stitch is pictured on the breast pocket.

These shorts have a drawstring waist.

Stitch’s face is embroidered on the bottom of one leg.

The shorts are striped blue and white.

The shorts have two pockets on the back.

An photo is printed on the front of pirates in jail bribing the dog who holds the key to their release.

The blue shirt has white splotches like clouds all over it.

Over at Disney’s Animal Kingdom, we found this cream-colored tee in Discovery Trading Co.

WALL-E is pictured holding a red heart up to EVE. “Be Kind” is next to them.

These overalls are a soft, grey fabric. They were spotted at Disney’s Polynesian Village Resort at Boutiki.

The iconic castle the phrase, “Dose of Disney,” is written in bright colors.

The pants can be tightened with a white cord.

These pale blue pants have “Disney Magic,” written on the sides in primary colors. These were also found at Disney’s Polynesian Village Resort at Boutiki.

This pink windbreaker has many pockets for snacks and toys. This is the last new item we found at Disney’s Polynesian Village Resort at Boutiki.

The “Dose of Disney” logo is repeated on the front.

This piece allows you to adjust the jacket to your child’s size easily.

A Darth Vader and Stormtrooper cartoony print is repeated throughout this shirt. Along with the Star Wars logo and the Death Star.

The interior of the hood has a red seam.

This and the tee below were in World of Disney.

This cute shirt features a stick-figure-type drawing of Darth Vader and the Death Star.

The collar has a bright, sith-red seam.

The end is tied for a change of textures.

This hoodie was also in World of Disney.

This v-neck is a grey-ish, almost green color.

A rainbow Mickey is on the breast pocket.

“Pride” is embroidered on the left sleeve. The letters are white, except for the “D” which is a rainbow ombre.

“Love” is down the back of the shirt.

A rainbow Mickey is in the “o.”

This was in the Emporium at Magic Kingdom and Bayview Gifts at Disney’s Contemporary Resort.

The shirt is white, and “Minnie” is in white letters with shadows below the mouse.

“Walt Disney World” is made of rainbow letters on the back.

The neckline and sleeves are lined with rainbow fabric.

There are triangular cutouts on the shoulders. This was in Fantasia at Disney’s Contemporary Resort.

This black case features the silhouettes of Pixar characters in a rainbow ombre.

This was at D-Tech in Marketplace Co-Op.

We found this Marvel Pride pin in Super Hero Headquarters.

It features the classic Marvel logo, but with a sparkling ombre rainbow in the background instead of solid red.

We found these new pins over at Pin Traders in Disney Springs.

Minnie is cuddling with her cat Figaro and dog Fifi.

Behind them is a pink heart with Minnie’s autograph across it.

BFFs Minnie and Daisy are having a tea party on this pin.

There are teacups on the table in front of them, and a teapot and cupcakes on the cart next to them.

Each box contains two randomly selected pins. There are eight total in the collection.

This was in Fantasia at Disney’s Contemporary Resort.

This simple pin features Minnie in her red polka dot dress and bow, waving. It was in Curtain Call Collectibles at Magic Kingdom.

This pin features Mickey holding an American flag, with fireworks going off behind him. It reads “4th of July 2022.” We found it and the pins below in Frontier Trading Post at Magic Kingdom.

This pin is of Meilin in her red panda form, making a sassy pose.

Mickey is marching in the “Main Street Electrical Parade” on this pin, holding a star-topped wand.

The drum float is behind him, with a sparkly red finish and the words “Disney Main Street Electrical Parade 50.”

These limited release pins by FiGPiN are larger than the average Disney pin and include transparent display stands.

This FiGPiN is of Hercules, in his iconic brown armor and blue cape.

He is resting his hands on his sword in front of him. His cape has a sparkly finish.

Pair Hercules with his (im)mortal enemy, the god Hades, with this pin.

Hades has an extra burst of blue flame along his back, as he sneers with anger.

Sheriff Woody is running on this pin.

With one foot up, we can see “Andy” written on the bottom of his boot.

This new animal print phone case is available in MaDe kiosks throughout Walt Disney World. You can add your name for an additional charge.

It has a cream-colored background and is patterned all over with Minnie bows. Each bow has a different animal print, like zebra stripes, tiger stripes, and leopard spots.

The first is black, with Mickey heads all over. They each have an animal print, like the Minnie bows on the phone case.

This leopard print band has a few hidden Mickeys among the spots.

There are two different sizes, one vertical and one horizontal.

Right now, the only designs available are Annual Passholder exclusives. These are also available outside of the kiosks.

They are all yellow with a black lobster claw clip. This one features the Monorail.

This one features Mickey in a white “D.”

And this one has Mickey’s face taking up most of the case.

All three are available in both case sizes.