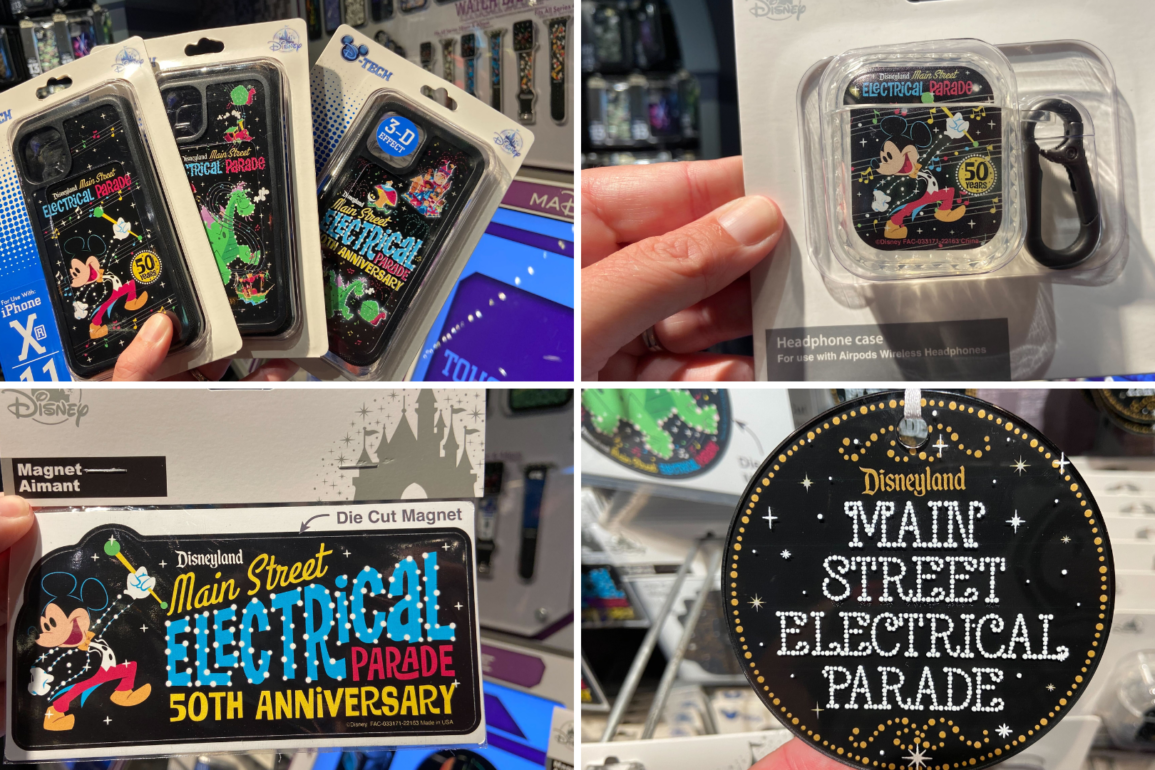 Fans of the Main Street Electrical Parade will cheer when they see the new 50th anniversary themed merchandise we found today in Disneyland!

We found four new magnets for sale. They are each priced at $14.99.

This circular magnet features several of the iconic floats from the parade, including Elliott the dragon, it’s a small world, Alice in Wonderland, Peter Pan, and the unforgettable snail float!

This magnet features a side profile of the title float from the Main Street Electrical Parade.

“Bring On The Lights” with this Mickey-shaped magnet that showcases everyone’s favorite green dragon: Elliott from Pete’s Dragon!

A baton-whirling, retro Mickey Mouse is the star of the show on this magnet. “Everybody neat and pretty? Then on with the show!”

Light up your tree this season with a Main Street Electrical Parade holiday ornament!

The back side of the ornament is blank.

Band leader Mickey returns on this headphone case! The case comes with an attached carabiner so you can keep tabs on your headphones easily.

If you’re a fan of Pete’s Dragon, maybe this is headphone case for you!

Both headphone cases come with a cut-out on the bottom for charging.

This phone case also features Mickey with his baton, in front of a background of musical notes.

While Elliott is the centerpiece of this case, it features some of the other iconic floats from Main Street Electrical Parade! Can you spot the Cheshire Cat?

This phone case features a 3-D effect that makes the imagery look like it’s popping out of the case!

We found these items at The Star Trader in Disneyland Park.

Make sure to grab these items before the parade “glows away” again! And don’t forget to check out other Main Street Electrical Parade merchandise we have spotted for the 50th Anniversary!

Previous
Pat Carroll, Voice of Ursula in ‘The Little Mermaid,’ Passed Away at 95