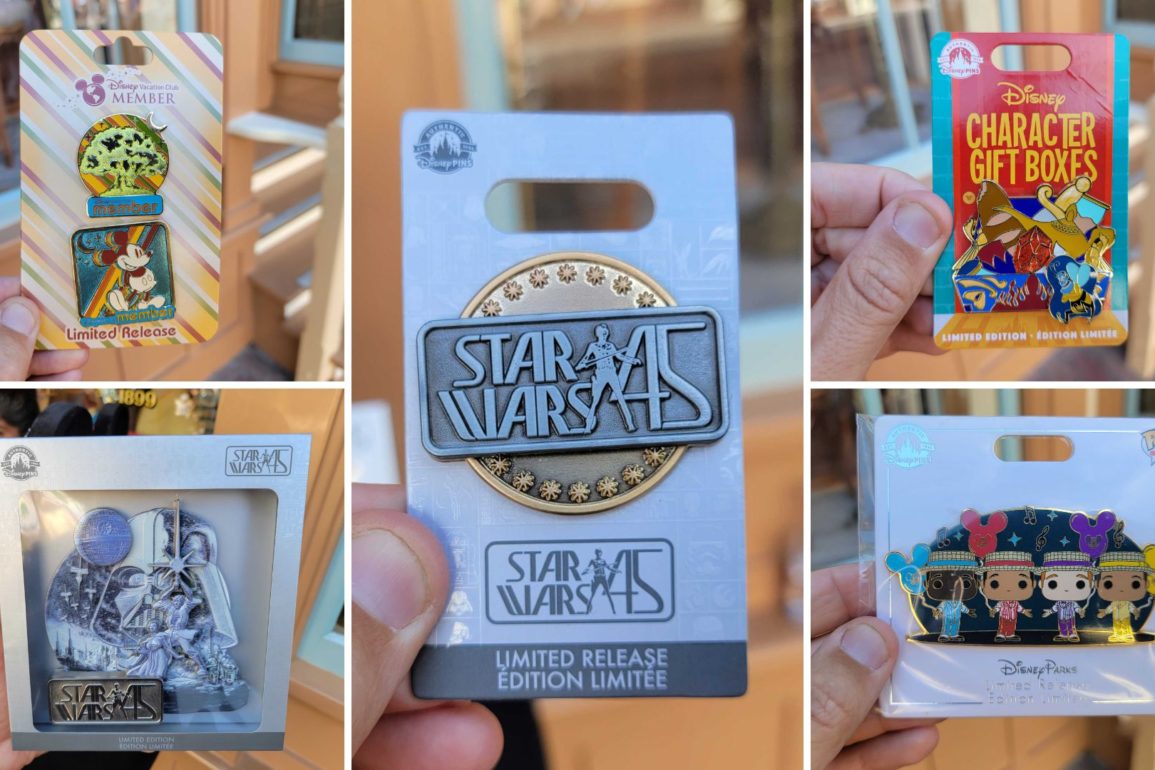 With a new month comes new pins to Disneyland Resort. Several new “Star Wars” pins honoring the film’s 45th anniversary, and plenty of other limited edition and limited release pins, are now available. We found these at 20th Century Music Co. in Disneyland.

This jumbo pin resembles the famous “Star Wars” poster with Darth Vader’s helmet looming in the background. Luke and Leia stand in the foreground and the Death Star floats above. It has a limited edition size of 1,500.

This silver pin features Darth Vader in the cockpit of his TIE Fighter. The pin is also shaped like a TIE Fighter.

This pin is shaped like the Millennium Falcon, with Han, Luke, Chewbacca, and Obi-Wan Kenobi pictured in the cockpit.

Finally, this “Star Wars” pin has a silver plate featuring the 45th anniversary logo atop a golden medallion.

The plate slides up to reveal the words “May the Force be with you.”

These next two pins are part of a series inspired by the vintage Kenner action figures. This one features a Tusken Raider on a backing card resembling a box.

This pin features a Jawa in its signature brown cloak.

Next up is this Funko POP!-inspired pin. It features the four Dapper Dans in a Funko style, each holding a Mickey balloon in their signature color. The background is dark blue, with stars and music notes floating around them.

This pin has a limited edition size of 2,250. Like other Character Gift Boxes pins, it features items connected to one character inside a box. This one is inspired by Aladdin, with his dagger, bread, jewel, Genie’s lamp, and an hourglass in a Magic Carpet-inspired box. The Genie as a bee is on the front of the box.

This set for Disney Vacation Club Members includes one pin featuring the Tree of Life from Disney’s Animal Kingdom. A silver moon and stars are above it and it has a retro-style striped background. The second pin features Mickey set against some stripes and a shiny blue background.

This collection is inspired by retro “Star Wars” trading cards.

There are eight pins in the collection, and each box contains two randomly selected pins.

There are ten pins in this “Lightyear” collection.

Each pin resembles a different spacey logo or patch from “Lightyear.”

Which of these pins is your favorite? Let us know in the comments below!