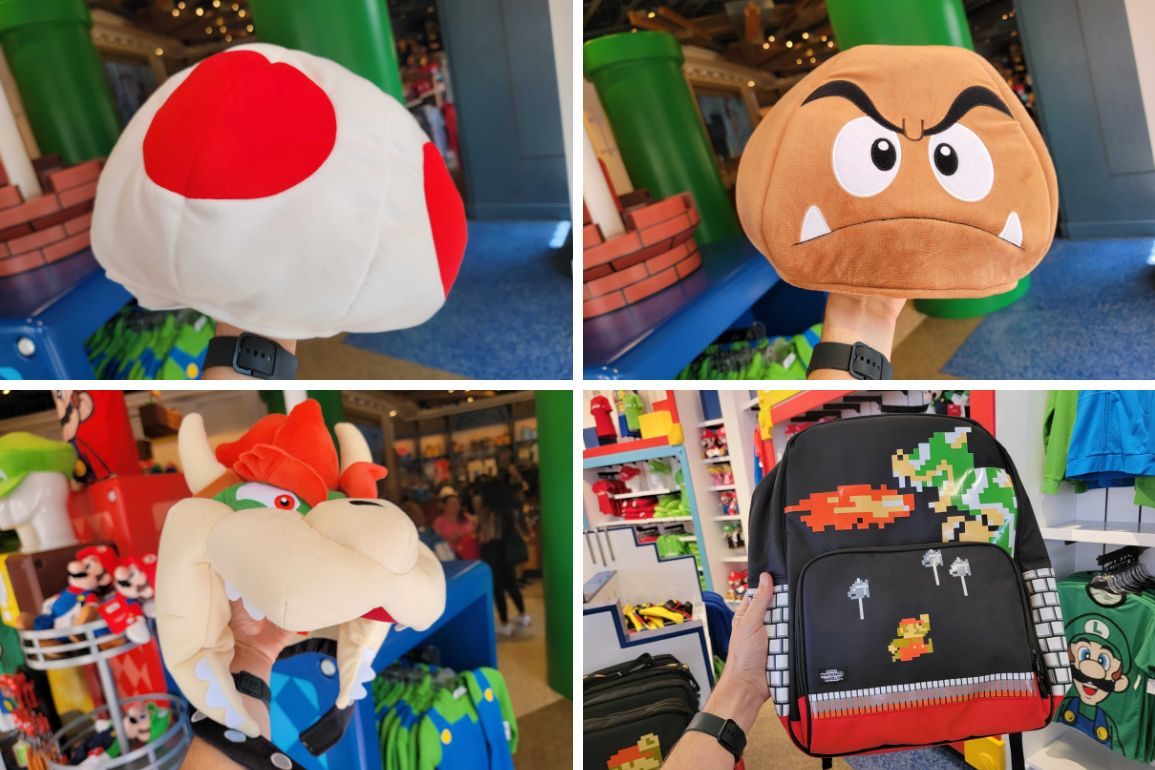 Straight from the Mushroom Kingdom of Super Nintendo World, fans of characters from the adorable to the abominable can show their love with new plush hats and bags at Universal Studios Hollywood!

First up is a trio of hats that feature classic characters. Let’s take a look!

There’s a fungus among us, thanks to this hat that features the top of Toad’s mushroom-like head!

Unsurprisingly, the cap is white, with red dots.

Our intrepid reporter was kind enough to demonstrate just how the hat appears when worn.

Watch your step! Now you can be a Goomba on the prowl with this hat.

The inside has a soft lining, perfect for wearing for a long day at the theme park.

That Goomba looks ready to give Mario a hard time!

The biggest bad guy of the kingdom also gets his due, as guests can now wear the horned head of Bowser.

His menacing red eyes stand out beautifully on his green skin.

There’s also a gray-studded collar that fastens to secure the hat.

The question is, are you wearing Bowser, or is Bowser eating you?!

Here, our reporter shows off the completed look.

Of course, Mario’s also got some new (or should I say old-school) looks! This new crossbody satchel shows off Mario in his classic 8-bit form.

A Super Nintendo World keychain is attached to one side.

It’s a great way to get ready for the new land opening early next year.

The strap features iconography from the Super Mario Bros. game, including coins, a mushroom, a Fire Flower, a Super Star, and mystery box.

Finally, Mario and Bowser do battle on this radical-looking backpack.

Bowser breathes flames on the top portion of the backpack…

…while Mario jumps on the lower portion.

The red straps add to the intense feel of the castle.

The axes also appear on this pull.

We found all of these items at the Universal Studios Store on the Upper Lot.

For more from Super Nintendo World, check out these other recent releases, including keychains, pins, posters, and more!

Previous
Everything Coming to Disney+ in August 2022

Next
TONIGHT on WDW News Tonight (7/28/22): Holiday Awesome Mix for Cosmic Rewind, Who Wants to Win A Lot of Corbucks?, and Pete & Eric Run Errands for Tom