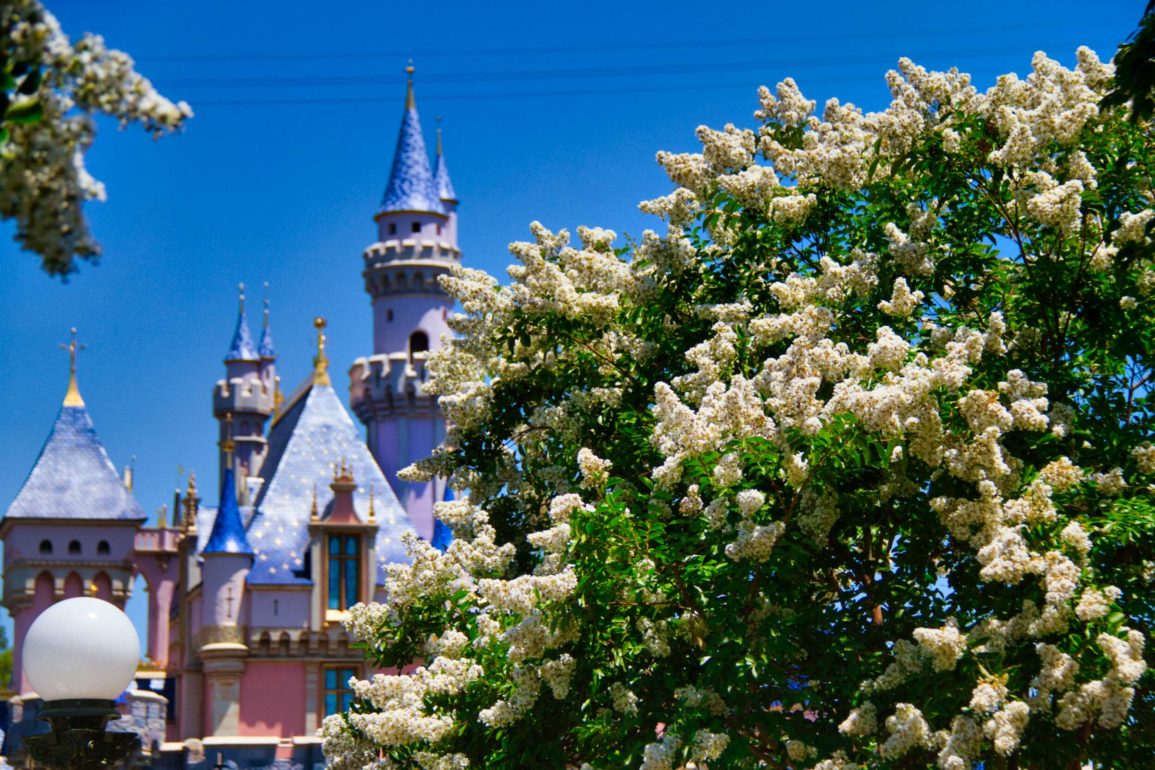 Hey there, hi there, ho there! We headed down to the Disneyland Resort to have lunch at Blue Bayou, greet a new friend who came ashore in Tomorrowland, and see what else we could find that was new. So join us for this most recent photo report from both parks.

The first thing we noticed was a new set of paper tickets for guests entering the park. These are just a few of the several new designs available.

We all know the pink trees that bloom at the Hub in spring are beautiful and have become iconic, but the white blooms on the trees in full summer are just as beautiful.

Channel your inner Sorcerer with this new Doctor Strange mug we found in the China Closet.

We are always grateful for the Cast Members who help us cover all this merchandise for you, our readers. Ayaka and Stuart were wonderful, and they even modeled the bags for us!

Further down Main Street, we found a new collection of apparel inspired by the parade as well. There are several pieces that have recently arrived, and you can see them all right here.

Over in Adventureland, we ran across some of Dr. Jones’ most famous artifacts, two of which are available for sale.

The coolest thing about these artifacts is the informational placards which talk about the factual origins and inspirations behind each of these MacGuffins from the “Indiana Jones” films. It’s more than a recreation of a prop; it’s a learning experience which… belongs in a museum.

We had to quit shopping after a while because it was time for lunch. We headed back to Blue Bayou to see what it was like without the walls. We didn’t pass up the opportunity to do some nice long-exposure photography while we were there.

And sure enough, while we were shooting, boats started floating by as the ride was testing. We can’t wait to get back on Pirates of the Caribbean.

We enjoyed a small lunch today, just enough to keep us going without being weighed down. We stopped through Blue Bayou a couple of weeks ago when the walls were still up, and we had a larger lunch that was delicious, but definitely slowed our pace a bit. You can see that whole dining experience in our video review right here:

It sure is a warm one out today. We skirted along the edge of the Rivers of America on our way to Batuu.

From way out along Savi’s Path, we can see the gleaming points of Black Spire Outpost beckoning us. Let’s head in.

Check out this old-school Battle Droid, deactivated and caged up next to some astromechs.

Vi Moradi was out recruiting for the Resistance in Black Spire Outpost. We had to promise not to tell the First Order we saw her.

Inside Dok Ondar’s Den of Antiquities, we ran across a new Legacy Lightsaber. Jedi Master Luminara Unduli’s lightsaber is one of the lightest we’ve felt so far.

It’s the perfect weight for swinging around and making lightsaber noises while reciting dialogue from the films. At least it was perfect, until the Cast Members asked us to stop freaking everyone out.

The never-ending planter construction project in front of Tomorrowland has had no change in quite some time, but it’s a nice spot to come and enjoy the view of the Astro Orbiter.

What a beautiful day out.

As we exited Space Mountain, we noticed a sign directing us to a couple of places that are no longer there. The Magic Eye Theater, where Captain EO and Honey, I Shrunk the Audience were presented, is still around but closed indefinitely.

The Space Place Restaurant closed in 1996, and once stood where the entrance to Space Mountain is now, with the seating area being the entire upstairs deck of what is now the Space Mountain exterior queue.

The walls to Finding Nemo Submarine Voyage are down, giving us our first close-up look at the lagoon since before the plague.

This was always one of our favorite photo spots before the shutdown, and we’re very glad to have it back.

A new resident has joined the annoying/beloved seagulls on a rock outcrop in the distance.

Hank the Septopus from “Finding Dory” has come to the lagoon, giving the side-eye to the seagulls who won’t pipe down.

Welcome to the party, Hank!

Heading out to check on the resorts, our first stop was at Disney’s Grand Californian Hotel and Spa to visit the Holiday Cart, stocked with fresh cookies and other treats to celebrate Pride month.

Next, we’re on to Disney’s Paradise Pier to see how the refurbishment and retheme are coming. The golden suns have been removed from the façades of the towers, leaving only blank lighting fixtures. These will eventually be Luxo balls in the Pixar retheme.

We love all the art that still hangs in the hotel lobby, reflective of the theme inside Disney California Adventure in the Paradise Pier area before it was rethemed.

From the hotel tower, we can get a peek at the Disney Vacation Club construction over at Disneyland Hotel. This building appears to be a new info center or something of the like.

We can also scope out the Downtown Disney construction, which doesn’t appear to be making much progress.

The view into the park is too good to resist, so let’s head into…

We haven’t seen this BB-8 balloon out in the park for a while.

Seaside Souvenirs has finally reopened after being closed for several weeks during a refurbishment.

Another refurbishment is underway at the park, as the Avengers Campus entryway arc reactor is covered up for repairs.

One final parting shot from the park today as we say hello to Captain Marvel. It has been a while since we’ve seen her in the land, and it’s always nice to run into a friend while making the rounds at the park.

Archway Installed at Connections Café Entrance, Construction Continues on Journey of Water at EPCOTFebruary 15, 2022
WATCH PARKSCENTER — Everything You Need to Know about MagicBand+ and a Preview of the 2022 D23 Expo!July 31, 2022
New 'The Mandalorian' MagicBand Now Available at Walt Disney WorldFebruary 28, 2022