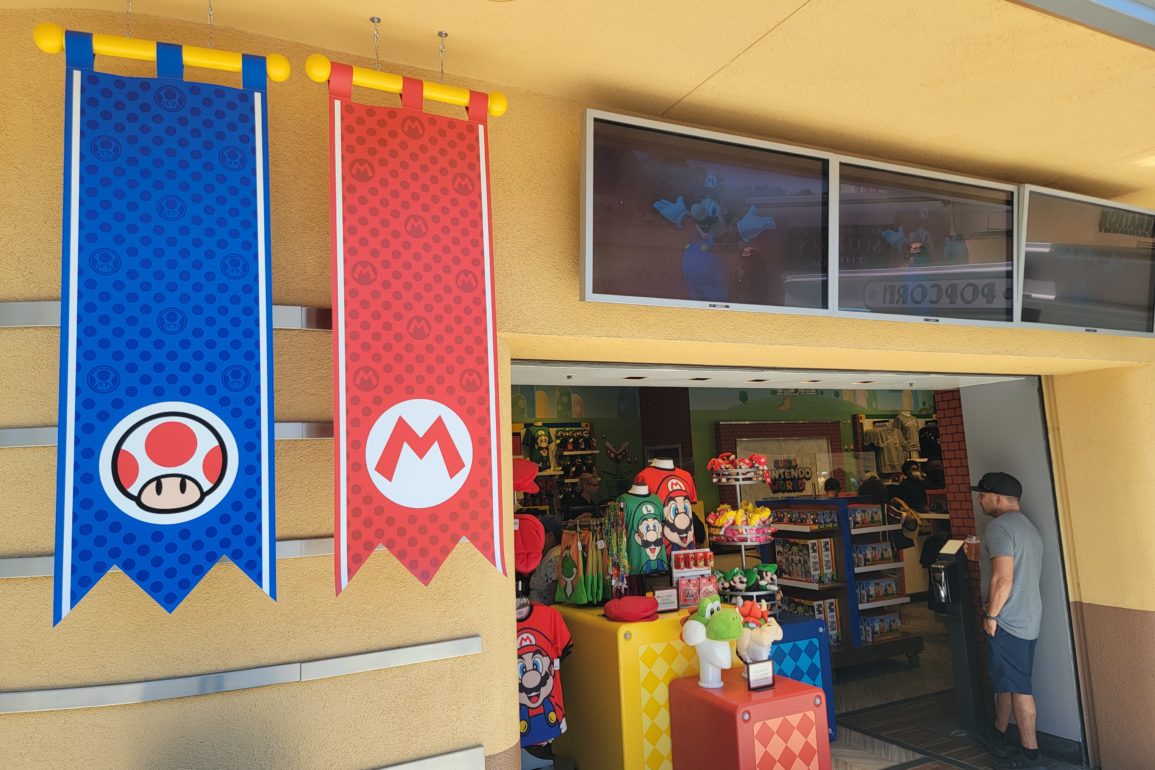 A new shop has opened on the Lower Lot at Universal Studios Hollywood. Not far from the Warp Pipe that will take guests into Super Nintendo World in early 2023, the Character Shop features much of the merchandise we’ve seen in the other shops which sell souvenirs featuring Mario and friends. Join us on a tour.

The shop is on the Lower Lot, in the building that was formerly the Studio Store.

Take a video tour with us on our YouTube channel, or by clicking the video below. Then keep scrolling for more photos and the new merchandise.

Out in front, a new popcorn and drink stand has recently opened as well.

There are two front doors and two side doors to the shop. The door to the right features banners of Luigi and Princess Peach.

The store is heavily themed, with wraps on the walls and themed fixtures scattered around the floor.

Some 3D elements on the walls give some depth, though they are less 3D than the props in the new Super Nintendo World room of the Studio Store.

All of the merchandise here can be found elsewhere in the park at the other two shops which sell Super Nintendo World merchandise.

On the left door, banners are hung for Toad and Mario.

Some of the merchandise we found here is brand new, and exclusive to Universal Studios Hollywood.

These new keychains are the first pieces of merchandise made exclusively for the upcoming attraction, Mario Kart: Bowser’s Challenge. Whereas much, if not all, of the merchandise we’ve seen so far has been imported from the Universal Studios Japan iteration of Super Nintendo World, these keychains are styled with the attraction name as it will be here at USH. Even if it is only the tiny metal placard which is unique, that is still something of note.

Mario can be seen driving his kart on Rainbow Road with a Chain Chomp in his path.

Princess Peach can be seen driving her kart in Piranha Plant Slide, having just narrowly escaped the plant.

Bowser can be seen above his castle, the setting for the attraction. In USJ, the attraction is called Mario Kart: Koopa’s Challenge because in Japan, Bowser is known as King Koopa.

Yoshi can be seen flying through the sky with a red shell and a couple of Bullet Bills chasing him.

Another new keychain, although not styled exclusively for USH, is this oil barrel. It is a real 3D sculpt in metal, giving this keychain some real weight.

Of course, our intrepid reporter couldn’t resist modeling it for you. It does ride low on the eyes, making it hard to see while wearing this one, but it’s so stylish we didn’t mind.

When we got our first Yoshi plush, he was less fuzzy and came with a generic tag from the Nintendo “All-Star Collection” which is available at-large. Now we have our own Yoshi plush, made just for the parks.

He even has a tag styled with the land logo to prove it.

This Yoshi is much fuzzier and cuddlier, though just as cute.

What do you think of the new shop and the USH-exclusive merchandise we found there? Let us know in the comments below.

Previous
PHOTOS: Signs Go Up at BoardWalk Deli Ahead of Grand Opening Next Week at Disney’s BoardWalk Resort