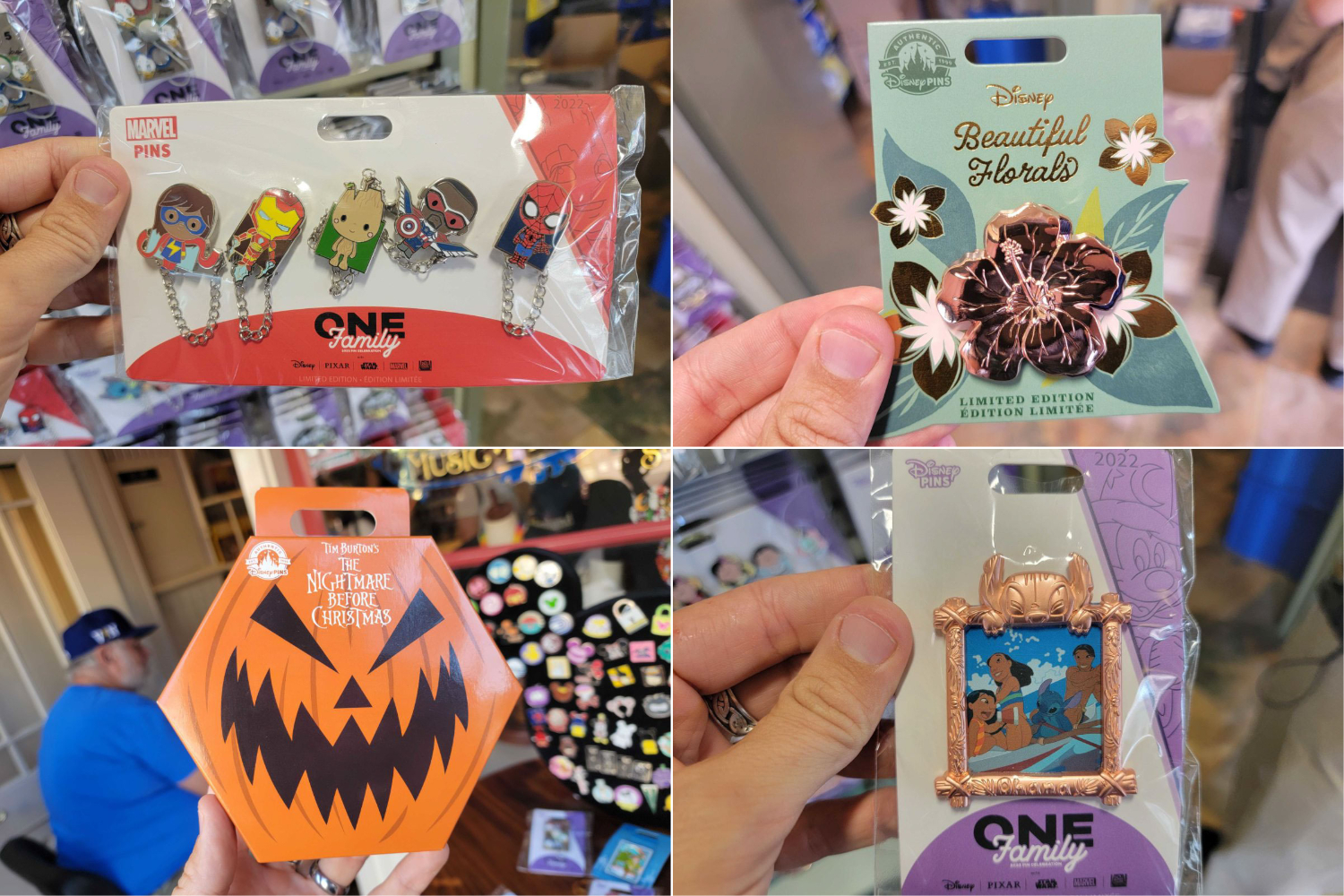 A whole slew of pins have come to the Disneyland Resort this week, including the Disney One Family pins from the 2022 Pin Celebration. A few other limited edition pins were also released this week, so let’s take a look at everything new!

This pin features Anna and Elsa back to back with a spinner of Olaf in different poses between the two. The two sides read “Team Elsa” and “Team Anna”. These pins are LE 1000.

The Inside Out pin features Bing Bong mid-step on a yellow background with starbursts and Sadness in the corner. This pin is also LE 1000.

The Huey, Dewey, and Louie pin shows off the three brothers on a corn hole board complete with a ball and string attached to the pin. This is a limited edition set of 1000 as well.

Chewbacca and R2-D2 playing Dejarik (also known as holochess) on the Millennium Falcon is what’s depicted on this pin. This pin is limited to 1000 pieces as well.

It’s always nice to see Oswald and Ortensia getting love on merchandise. In this pin we see them cooking Oswald’s Eggs Benedict as seen at the bottom of the pin. This is limited to 1000 pieces.

This pin is a bit more limited, at only 500 pieces. On it we see an ornate Polynesian-style frame with a stylized Stitch on top. Within the frame is Lilo, Nani, Stitch, and David on a surfboard. The art can also pop out.

The Spider-Man pin is also limited to 500 pieces, with a stylized frame depicting New York City with comic book Peter Parker comforting Aunt May within the art itself.

This pin appears to be open issue, with a fairly simple design. The pin is a long bar with red on top and bottom and white in the middle. “Friends & Family” is written across, with “friends” in green, “family” in blue, and a grey ampersand with a Mickey indentation on the top.

These cutesy art style pins show off Stitch, Lilo, Nani, David, and Scrump all together as connector pins. This set is also limited to 750 sets.

This limited edition mystery set depicts a number of Disney families as part of the set. From top to bottom, left to right, we see Madame Adelaide Bonfamille with the Aristocats, Pinocchio with Cleo and Figaro, Pocahontas and Meeko, Rapunzel and Pascal, Antonio Madrigal and his animals, Moana with Pua and Hei Hei, Roger with Pongo, Alice, Wall-E, Jenny and Oliver, Wendy and Michael with Nana, and Captain Marvel with Goose.

This limited release mystery set depicts “friends and family” written in different languages with characters from across the Disney pantheon. From top to bottom, left to right, we have Luca with Giulia and Alberto, Miguel with Hector and Dante, Mickey and Minnie, Goofy and Donald, Hiro and Baymax, Anna and Elsa with Kristoff and Olaf, Aladdin with Genie and Abu, Lumiere and Cogsworth, Snow White with Dopey and Grumpy, Mulan with her parents, the Lost Boys, Luke Skywalker with Darth Vader and Princess Leia, Black Panther with Shuri, and Jake with Neytiri.

This set shows off various characters with their personalities written below, and comes in a limited edition of 300. We see Baymax, Judy Hopps, Stitch, Hei Hei, Simba, Eeyore, and Bolt.

All of these One Family items we found at Pin Traders in the Downtown Disney District unless otherwise noted.

This pin is a limited edition of 2000 and depicts Peter Pan’s Flight in Fantasyland, although not similar to any poster we’ve ever seen for the attraction. We found this and the previous Moana pin at Pin Traders in the Downtown Disney District.

And over at our old reliable friend 20th Century Music Co. on Main Street, U.S.A., we have a mystery box set for “The Nightmare Before Christmas” containing two mystery pins. The possible choices are Jack Skellington, Zero, Sally, the Mayor of Halloween Town, Santa Claus, Oogie Boogie, Barrel, Shock, Lock, and the Scary Teddy.

Which of these pins will you be adding to your collection? Let us know in the comments below!