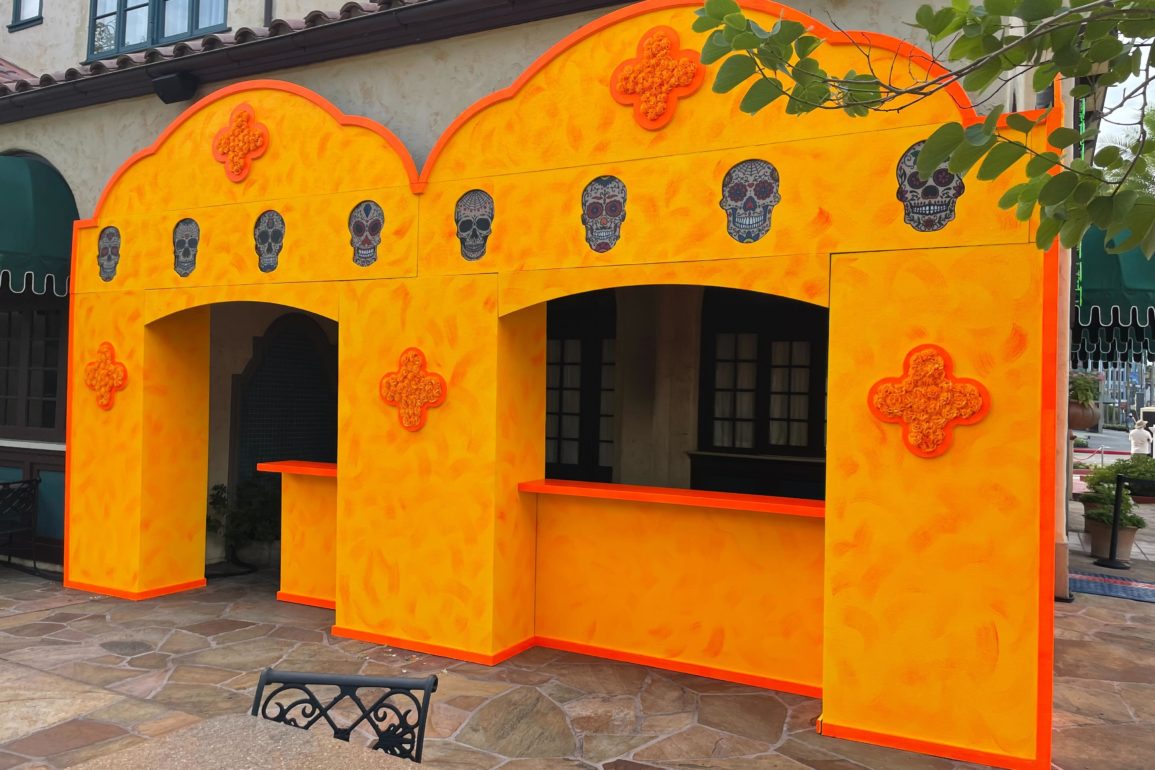 With the kickoff to Halloween Horror Nights 31 just weeks away, the first of the food booths have emerged at Universal Studios Florida.

The gold and orange booth features crosses made of marigolds, while a series of calaveras (or skulls, in English) run across the top.

According to the latest speculation map from Horror Night Nightmares, this section of the park should be home to the Scarecrow scare zone, though it’s unclear how this will fit into the theme.

Still, it does bring a nice splash of color to the area, especially with the marigold decorations.

Meanwhile, the calaveras are decorated with elements like hearts, flowers, and leaves.

Most of the booths have yet to receive any theming. Over in New York, a pair of booths stand across from Transformers: The Ride and the former site of Universal Studios Classic Monsters Café.

In San Francisco, three full-sized bars are set up on the deck behind Lombard’s Seafood Grille.

Each of them are decorated with a faux brick pattern, along with an emblem with rune-like symbols. This area is expected to be the “Coven Witches” scare zone, so these likely have to do with the spell the witches cast.

The seating area has been decorated with gray columns that have similar symbols etched on them.

This will likely be an eerie place to relax, perhaps before a showing of “Marathon of Mayhem.”

The columns appear weathered, likely to reflect the ancient evil contained within.

Other columns have space for menus to be added.

Another individual booth is in place next to the bridge leading to World Expo.

This booth can be found next to the train from “Back to the Future Part III” on the border between World Expo and Springfield, U.S.A.

A series of booths are also in place around Woody Woodpecker’s KidZone. These are located across from Animal Actors on Location!

Finally, a booth is up next to KidZone Pizza Company. Could pizza fries be far away? The event usually brings a wide range of devilishly delicious food both sweet and savory, so we’ll be waiting with antici… pation.