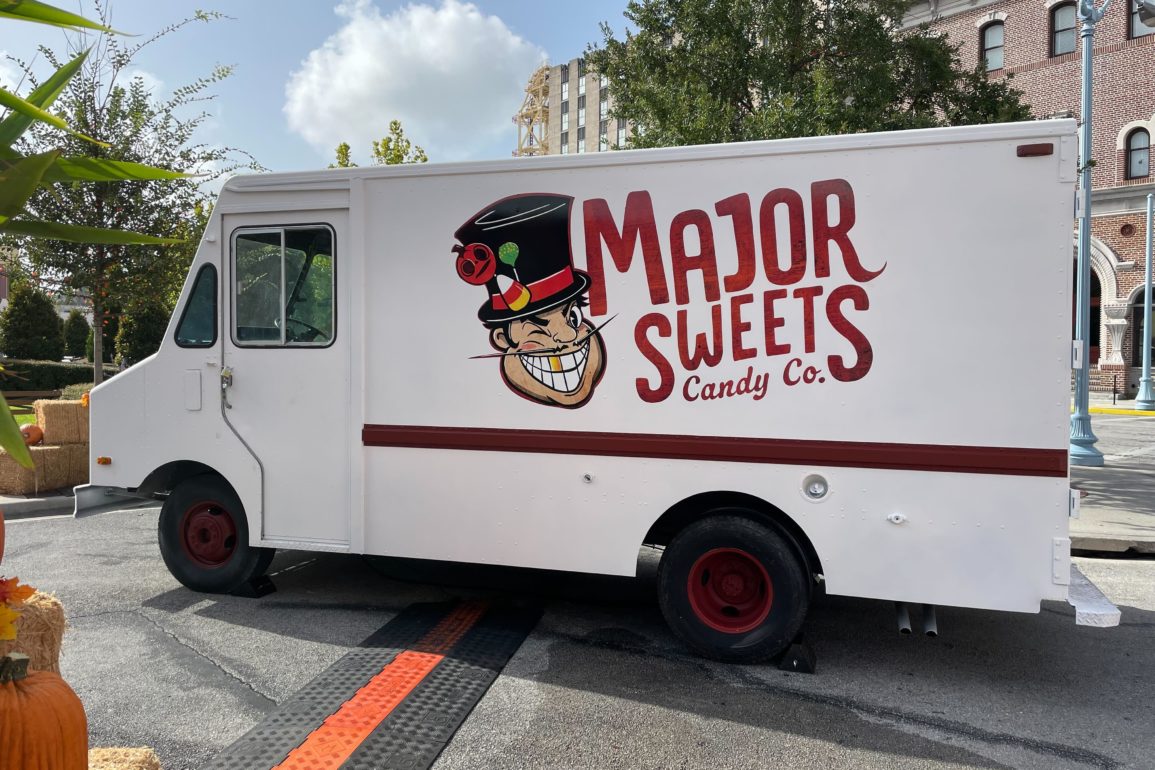 In San Francisco, the back of the stage for the rumored “Coven Witches” scare zone is up.

Beneath an all-seeing eye is a door. Who knows what terrors wait to come through?

It features a claw-like handle, adding to the sinister look.

To each side is a stone archway carved with rune-like symbols.

Currently, guests can also peek backstage to see what it looks like from the Scareactors’ perspective.

The steps on the stage indicate that Scareactors will be able to enter through the doors.

Over in Production Central, the lighting trusses have had their top added for the “Traditional Halloween” scare zone, according to Horror Night Nightmares’ latest speculation map.

Special effects equipment is in place.

The setup is reminiscent of last year’s 30 Years 30 Fears scare zone, which saw the return of the iconic neon HHN sign, as pictured below.

(We’ve got our fingers crossed that it will be back again for Halloween Horror Nights 31.)

Meanwhile, over in Hollywood, Nettlewoods Cemetery is looking fuller, thanks to these decrepit-looking planters.

Statues have been added to the graveyard sets.

Heading further into the land, larger set pieces have been added, fleshing out the crypt.

The mausoleum looks like it’s had some moss added to it to make it even creepier.

Another archway has been installed next to the Broadcast Center.

A smaller statue of a grieving woman is here.

Next to Schwab’s Pharmacy, the set, which features an actor activated trigger, now has old branches around to spruce up the place.

At the end of the road near Central Park, a new detail has been added to the “Dia de los Muertos”-inspired booth.

A new garland of marigolds has been hung from the window, with more flowers on both ends.

Meanwhile, kitchen equipment has already been moved in.

Heading into New York, a Major Sweets Candy Co. truck has been parked in the scare zone expected to be themed to “Candy Mutants.”

The front promises that Major Sweets delivers on “killer taste!”

It seems the Major isn’t immune to a specialty license plate, which reads “SW33TS.” The 31 on the sticker likely refers to the 31st incarnation of the event happening this year.

Still in New York, where many food booths are usually set up in Battery Park, a gray brick façade covers what looks to be where a menu will be posted.

The adjacent booth has the same brick, with creepy red eyes for windows and a toothy “mouth” door. The sign reads, “Trick or Treat,” with treat mostly wiped away.

Nearby is another house-shaped booth with silhouettes of figures crowding the windows and an ominous shape at the door.

A butcher’s stand has been set up at one end of Sting Alley, next to Nazarman’s.

A menu standee is in place.

Stepping into the alley, another counter with meat slabs is set up and kitchen equipment is being placed.

We’re a little nervous to see what (or who) a butcher might be selling at Halloween Horror Nights.

More tents have popped up around World Expo. This one can be found by Men in Black: Alien Attack.

We spotted this one by the former Fear Factor Live theater, which is expected to be home to this year’s version of Halloween Nightmare Fuel.

Across the bridge leading towards London, this tent is decorated as a pumpkin.

Speaking of pumpkins, jack-o’-lanterns can be found on the heads of the scarecrows on this food booth in front of Animal Actors on Location! in Woody Woodpecker’s KidZone.

Those scarecrows look intimidating, almost as if they’re staring at guests.

Meanwhile, this bloody-looking stand can be found next to the DeLorean from “Back to the Future,” between KidZone and Springfield, U.S.A.

Across from SpongeBob StorePants, this gothic-looking booth is up, and already has themed wraps on the faux windows.

Above the actual windows are these crests, which feature similar rune-like markings as on the “Coven Witches” stage.

The wraps show an inside full of potions.

It looks like there’ll be scares and bites galore when Halloween Horror Nights 31 kicks off on September 2.